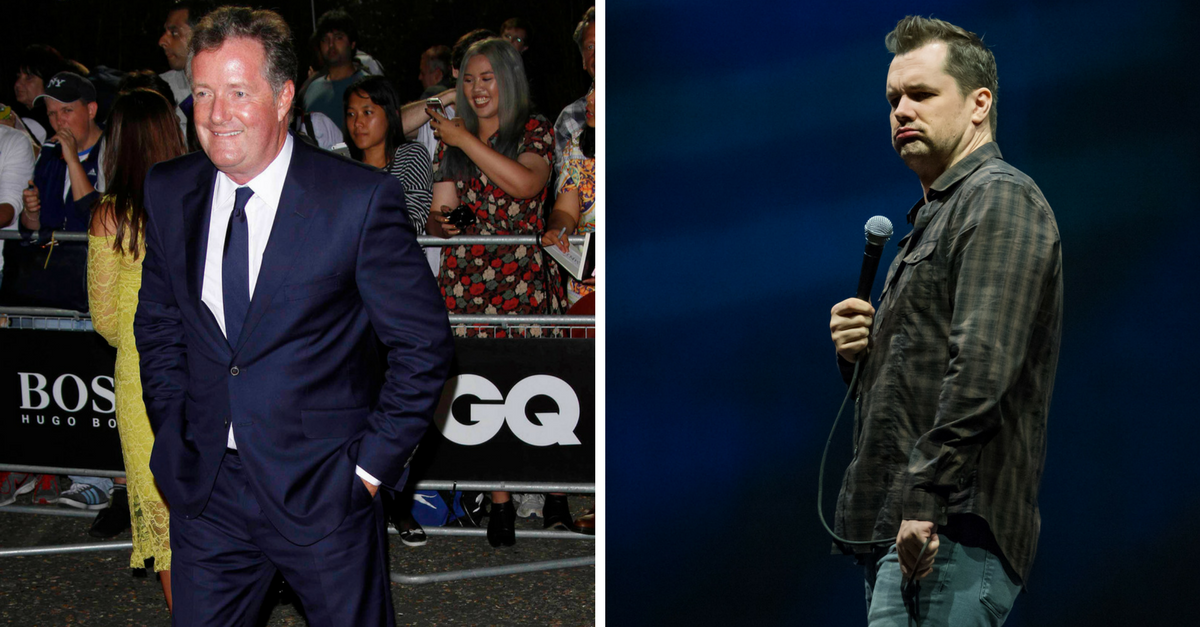 Please enjoy this clip of @jimjefferies going to town on Piers Morgan on Real Time. pic.twitter.com/jKc5WgiiLI

“There is no Muslim ban,” he asserted, much to the dismay of guest Jim Jefferies, who immediately yelled, “Oh, fuck off!”

“Hitler didn’t kill the Jews on the first day,” Jefferies said. “He worked up to it.”

Morgan then tried to explain that there is “ridiculous, hysterical, over-the-top nonsense” surrounding Trump and that many people are overreacting to his policy proposals. Meanwhile, Jefferies continued comparing the president to Hitler.

But then things got personal.

“You just like that that you won “The Apprentice” and you have a famous friend,” Jefferies attacked Morgan’s relationship with Trump.

Morgan retorted by telling Jefferies that his behavior was costing him his audience, after which Jefferies asked the audience members if they still liked him. When they applauded, he proceeded to flip Morgan the bird.

After the show, Morgan took to Twitter to continue attacking Jefferies, saying, “He just made himself look hysterical & silly. Shame, as he’s usually quite funny.”

He just made himself look hysterical & silly. Shame, as he's usually quite funny. https://t.co/QDjHa9uGyo

Morgan then found himself in the midst of another argument, this time on Twitter, when “Harry Potter” author J.K. Rowling expressed delight at seeing Jefferies take Morgan down. After some back-and-forth between the two, Rowling left Morgan with a final message, saying, “If only you’d read Harry Potter, you’d know the downside of sucking up to the biggest bully in school is getting burned alive.”

.@piersmorgan If only you'd read Harry Potter, you'd know the downside of sucking up to the biggest bully in school is getting burned alive.