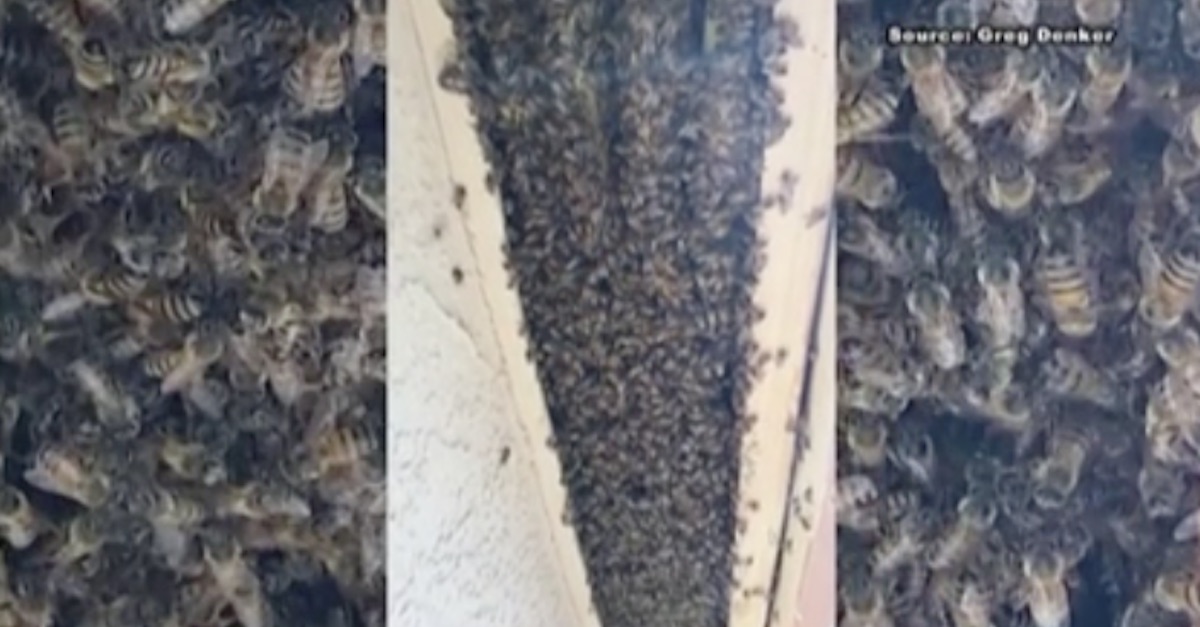 A homeowner in Tuscon, Ariz. this week discovered the stuff of nightmares in a guest house on her property that had apparently been growing for some time.

RELATED: A can of good ol? fashioned Raid has nothing on a wasp nest found in Brazil

Cindy Stewart discovered a beehive that was 9-feet-long in under the roof and in the attic of her guest house that was home to some 50,000-plus Africanized Honey Bees, otherwise known as “killer bees”. They were inside the wood paneling of the house.

NOW: On my way to east side #Tucson home where Cindy Stewart said massive swarm of #BEES has overtaken her property. @TucsonNewsNow 🐝 pic.twitter.com/hyhLZ1iYuv

It had the whole neighborhood buzzing, and not in a good way.

According to KOLD-TV, Stewart called American Bee Control to relocate the colony rather than exterminating it. She described the bees as “very aggressive.”

Greg Denker of the bee removal service said that we are talking about a hive that “has been undisturbed by people for a long time, so it’s grown very large.”

Greg Denker with American Bee Control is on the job to relocate ~50,000 honey bees from this home. Yes, I said 50-THOUSAND! 😳 @TucsonNewsNow pic.twitter.com/UdKVXplhV6

Denker said that if keeping bees had been illegal in Arizona this hive would have been extremely illegal considering that these bees could not be handled.

“If there were laws against bee-keeping in Arizona this would be against the law. Every jurisdiction that has laws on bee-keeping says you have to have a hive that can be manipulated. So keeping a hive in a cavity inside of a roof is a no-no,” he said.

Bee-lieve it or not, bees don’t care about any laws or non-laws. Left to their own devices, it looks like they carved out a nice niche for themselves.

RELATED: A man had to fight off a swarm of bees to save a woman who was trapped in a car fire

We suppose it was fun while it lasted, but now they’re moving on to — probably — yellower pastures.

Since we were curious about some of the other things American Bee Control has seen over the years, we took a look at their Facebook page.

We immediately regretted that decision.

The United States Agricultural Service says that “[u]nless a honey bee colony is in a location that is close to people, pets or farm animals, it should be left alone” and adds that bees are specifically important economically in Arizona.

“Most people appreciate the main product of the hive – honey. Honey production, however, isn’t the only use for honey bees. They are also very important to Arizona agriculture, a sophisticated business that impacts the state’s economy by about $6.3 billion annually,” the government website says. “In fact, one-third of our daily diet comes from crops pollinated by honey bees. Without the pollen that honey bees transport, many plants can’t produce fruits, vegetables and seeds. Imagine walking into your neighborhood supermarket and finding a third of the food currently available not on the shelves!”