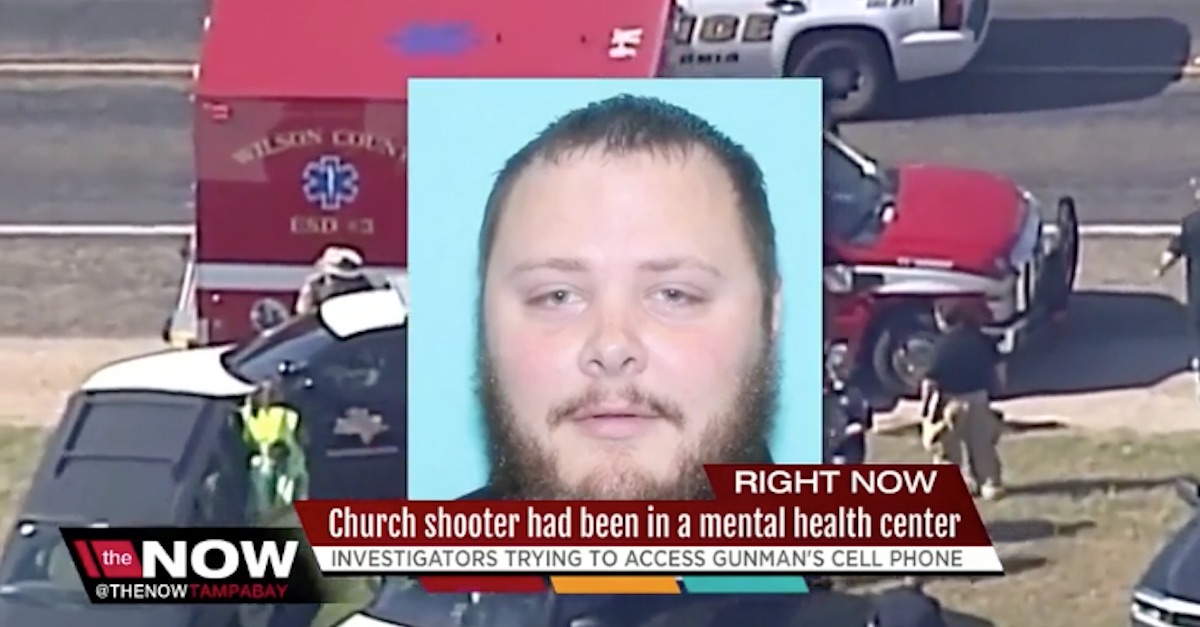 RELATED: Why is the mainstream media ignoring that it took an AR-15 to stop the Texas shooter?

In a frightening development, the Houston Chronicle is reporting that Kelley appeared at the First Baptist Church for an annual festival, an appearance that surprised churchgoers who knew about a “domestic situation” believed to have been behind the shooting.

A photo album of the festival was posted on the church’s website.

Not only was the church community surprised that Kelley was there, they saw this a turning point for him.

“This church is very loving, nonjudgmental and if he had had concerns or issues and spoken with the clergy — they’re nonjudgmental,” Tambria Read told the Chronicle. “They would have helped him deal with his issues and helped him try to get focused.”

The news outlet noted that Read is friends with Kelley’s mother-in-law, who he was reportedly targeting on Sunday but who wasn’t at the church.

Earlier on Tuesday it was learned that Kelley escaped from a mental hospital in 2012.

He escaped from a mental health center in New Mexico and got in trouble for bringing guns onto a military base and threatening his superiors there, police reports indicate.

Kelley was also named as a suspect in a 2013 sexual assault in his hometown of New Braunfels, about 35 miles (56 kilometers) from the scene of the church attack.

The records that emerged Tuesday add up to at least three missed opportunities that might have offered law enforcement a way to stop Kelley from having access to guns long before he slaughtered much of the congregation in the middle of a Sunday service. Kelley died of a self-inflicted gunshot wound after he was chased by bystanders and crashed his car.

The Air Force confirmed Tuesday that Kelley had been treated in the facility after he was placed under pretrial confinement stemming from a court-martial on charges that he assaulted his spouse and hit her child hard enough to fracture the boy?s skull.

RELATED: Texas church shooter escaped from a mental hospital in 2012

Involuntary commitment to a mental institution would have been grounds to deny him a weapon provided that records of his confinement were submitted to the federal database used to conduct background checks on people who try to purchase guns.