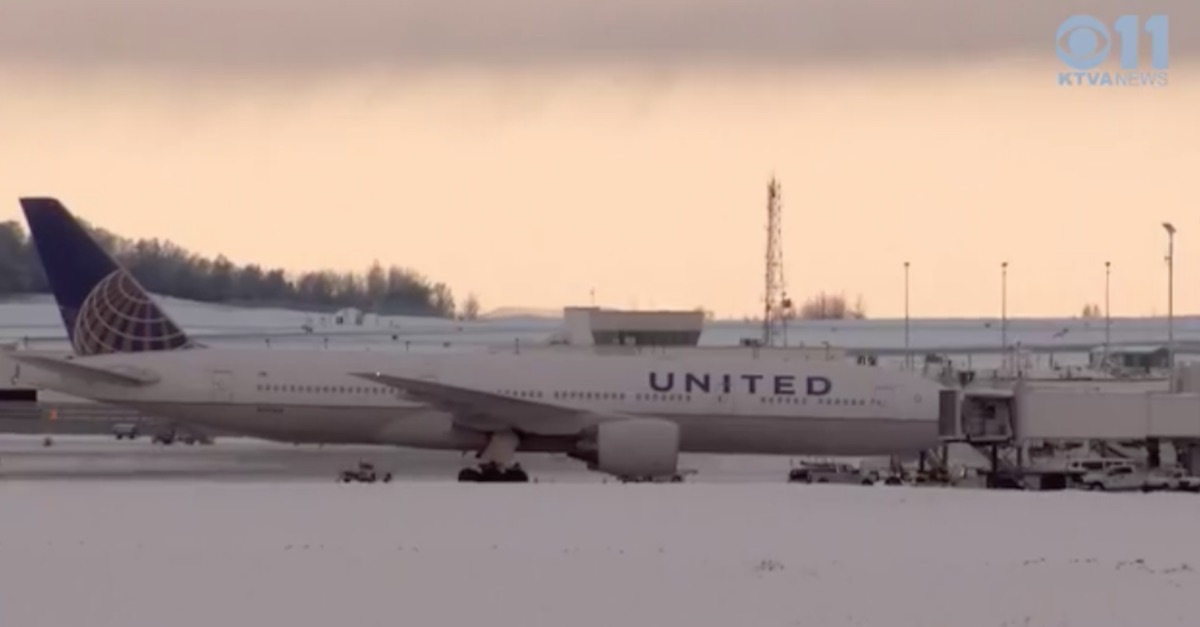 United Airlines flight 895 from Chicago to Hong Kong had to stop in Anchorage, Alaska, because an incident of epic poo-portions left bathrooms soiled and passengers uneasy.

An unidentified 22-year-old man who witnesses said had something wrong with him “upstairs” reportedly smeared feces on the walls of plane bathrooms and more.

“Something wasn’t right with him upstairs,” @united passenger BJ Canup said. “I saw him spreading feces on the bathroom wall with his shirt. He was pouring soda and spitting food all over too” @ktva

Tri Nguyen of Evansville, Ind., was sitting next to the 22-year-old on the flight and said the man was moved by his mother from California to Indiana to live with his aunt because “he’s been in a lot of trouble” and that she believed he needed a “change of scenery.” He also said that the 22-year-old was on the plane because his family was sending him to Vietnam and that he had just been released from jail two days prior to the flight.

“I knew his aunt in Evansville. She asked if I would look out for him. He’s been in a lot of trouble, and the family was sending him to Vietnam,” Nguyen told KTVA. “His mom lives in Oakland, California, and he just kept getting into trouble. So he was moved to Evansville to live with his aunt where it was believed a change of scenery would help him. It didn’t work, he’s been in trouble for the past five years.”

Passenger Tri Nguyen’s calm demeanor on the @united flight that landed in #Anchorage was a huge reason @UnitedPilots were able to make a key decision in landing the plane destined for #Hongkong. pic.twitter.com/w04dpFdDTL

Nguyen has been credited for defusing the disturbing situation, along with Enrico Millo, Zach Baker and Evans Mendonca.

“It was quite a sight. He had crap everywhere. I was able to see inside as they were talking him out. He was stuffing his shirt in the toilet then wiping it on the walls,” witness BJ Canup said. “I don’t know if he was trying to wipe crap on or wipe it off. He was shirtless and his shirt was beyond wearable again.”

RELATED: Naked, wandering boy covered in feces leads police to “one of the most horrifying houses”

The good news is that the situation was contained calmly by three passengers until the pilots were able to land safely in Alaska, where police and the FBI took care of the rest.

The 22-year-old was not charged and was taken to a hospital for a mental evaluation. The man, who Nguyen said doesn’t speak much English, spoke with a translator who apparently got the impression that he was “gravely disabled.”

The man’s family purchased a one-way ticket for him to Vietnam.

Passengers were also provided hotels for a night by United Airlines.