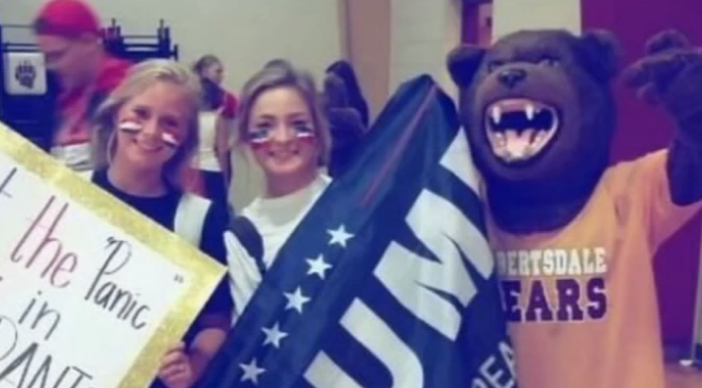 An Alabama teenager is facing nationwide backlash after displaying a “Put the Panic back in Hispanic” sign at a high school pep rally.

The teen, who is not being identified because of her age, took a celebratory picture with the sign — which read “Put the Panic back in Hispanic. #dontgetbutthurt I’m honestly not gunna care if you do anyways so #sorryboutit” — and posted it to Instagram alongside the school’s mascot and a “Make America Great Again” flag.

The flag and the sign were displayed at a Robertsdale High School football game.

RELATED: A woman is apologizing after her racist tirade against three Muslim women went viral

A classmate took a screenshot of the sign and posted it to Facebook, where it’s been shared almost three thousand times.

The teen who displayed the sign has deleted her social media accounts, reports NBC15.

A lawyer for one of the girls in the now-infamous photo says they intended the sign as a jeer at Rosedale High School’s opponent that night, the Spanish Fort Toros, and not as a racist gesture.

After instructing viewers “don’t get butthurt” and “I’m honestly not gunna care if you do anyways,” the teen who displayed the sign has apologized. “It wasn’t my intention and was not meant for it to be taken that way. I apologize for the publicity and misunderstandings that it has brought to our school,” she wrote in a note of apology.

Eddie Tyler, Superintendent of Baldwin County Schools, said they are investigating the incident:

We are aware of a photo that appears to be taken at a Robertsdale High School football pep rally Friday Sept. 15 that is circulating on social media containing political banners and unacceptable language. School administrators, as well as my office, are following up on the matter.