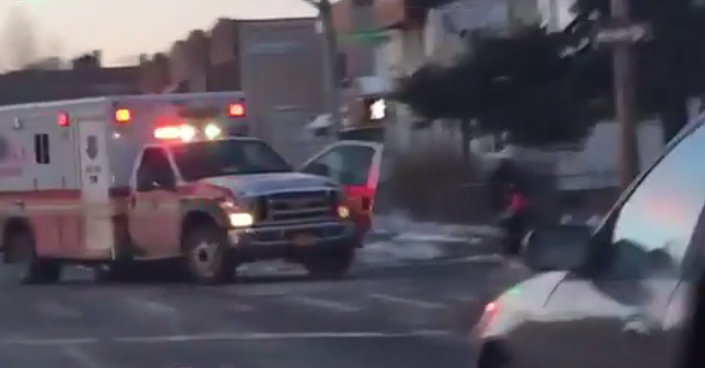 A man got behind the wheel of an ambulance, then ran over and killed FDNY medic Yadira Arroyo, a mother of five.

The man had been joyriding on the ambulance’s bumper when he took over control of the vehicle. Arroyo, 44, was crushed under the wheels; her partner, Monique Williams, was injured after they tried to get the man off the back of the vehicle, according to the New York Post.

“They were screaming. They were crying. Everyone was trying to help,” witness Virgilio German said.

RELATED: Cameras were rolling as a detective saved a toddler from nearly being run over

The 25-year-old suspect, whose name was not immediately released, has a prior criminal record. He got only a short distance before hitting a car and coming to a stop.

As the two medics got out to shoo away the man, he overpowered them, boarded the ambulance and started to drive off, according to the Post.

“They were acting very bravely,” Fire Commissioner Daniel Nigro said. “They certainly wanted to continue on their way to the call. This person had no business being in this ambulance.”

RELATED: Horrifying video shows moment woman was run over by a truck at a gas station

The suspect apparently floored the gas pedal, backed into Arroyo, and then dragged her 8 to 10 feet forward, according to witnesses. Arroyo, a 14-year FDNY veteran, is seen being crushed by the ambulance in a video posted on social media.

“I heard somebody crying and then I heard, ‘Boom!’ like an accident,” German told the Post. “There were two paramedics. They were down on the floor. She wasn’t moving.”

A second video shows Arroyo motionless on the pavement as a woman, who sources said appears to be Williams, leans over her. Williams apparently ran over to where the suspect was being held and kicked him a few times before being restrained.

“Makes sense, the guy just ran over her partner. Wouldn?t blame her for wanting to kick his ass,” an FDNY source said.

“It’s a sad night for everyone in the department,” Nigro said.