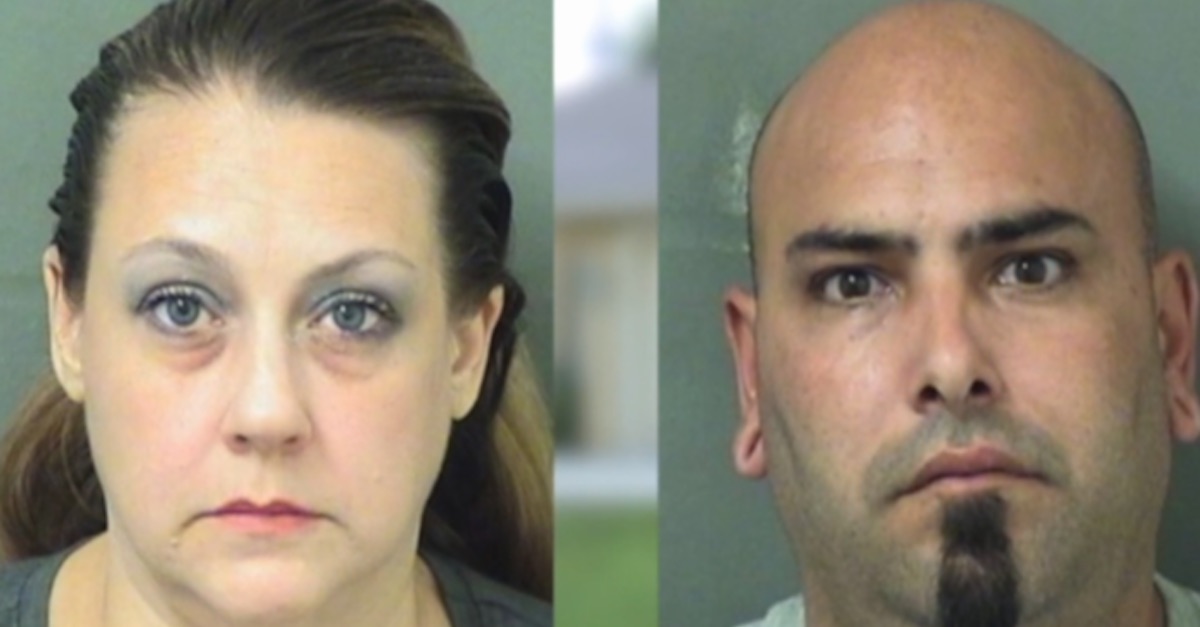 RELATED: Kansas court sentences father who starved his son and fed his corpse to pigs

Alejandro Aleman and Kristen Meyer-Aleman face charges of first-degree murder and could be executed for the death Tayla Aleman, who, at the time of her death, weighed seven pounds.

The child weighed nine pounds at birth. It was determined that the baby died from exhaustion due to a lack of nutrition because of neglect. There were also clear physical signs to support this.

It is said that Tayla looked old and had wrinkled skin; her body was covered in hair that grew to combat the coldness a lack of nutrition caused; she had no teeth; she had blood in her lungs and she was covered in sores.

WPTV reported that despite the inarguably horrible physical evidence and the living conditions at the home — walls were covered in feces — the parents callously denied everything repeatedly in interviews.

There is an audio recording of an investigator asking why the parents never took Tayla to the hospital.

“You guys never took Tayla to the doctor to find out what’s going on and all she did was lose weight, lose weight and not put on any weight. No one ever noticed it and she didn’t have any teeth, that’s not normal for a 13-month-old,” Palm Beach County Sheriff’s Office Detective Vionide St. Jean says.

The father’s response was unbelievable.

“Is there a law, I’m not trying to be a dick about it, but is there a law that your baby has to go to the doctor?” he says.

“I never starved my children, why would I starve her?” she said. She, a mother of 10, also claimed she “didn’t realize [Tayla] was that small.”

A report from the Palm Beach Post from a couple of days ago described the horrid conditions of this family’s life.

Dirty, shoeless and hungry, many of the children, ages 2-15, played outside almost daily, no adult around, when others their age were either in school or at daycare. Sometimes they banged on the door of their home, but no one would let them in.

Neighbors described to sheriff’s investigators a near-feral clan of children during the Alemans’ stay at the rental property. The kids rummaged through the neighbors’ trash. They could be heard at 3 a.m. Some of the younger boys communicated only through “grunting sounds.”

Neighbors said that children roamed the neighborhood and police say some of the children, as old as 14, couldn’t even say their names. Others said the parents would lock the children out of the house until night.

“They would usually let their children just kind of go all through the neighborhood and they wouldn’t keep any eye on them. Mess up people’s car and scratch them,” neighbor Tripp Hartson said. “They were actually out front my house with baseball bats and other various weapons and I called the police on them twice.”

As bad as the abuse was, the state has admitted its own culpability by failing to properly investigate. The family had been investigated four times.

According to documents obtained by People, the home reeked of feces. Police found “a dog in a cage, standing in waste two inches thick” and “uncovered a 5-foot pile of urine-stained laundry.”

The 10 other children are now in state custody. The Alemans had been receiving $1,600 a month in food stamps.