He Said He Had No Pride In His County, So He Burned the American Flag — Then Got a Knock on His Door 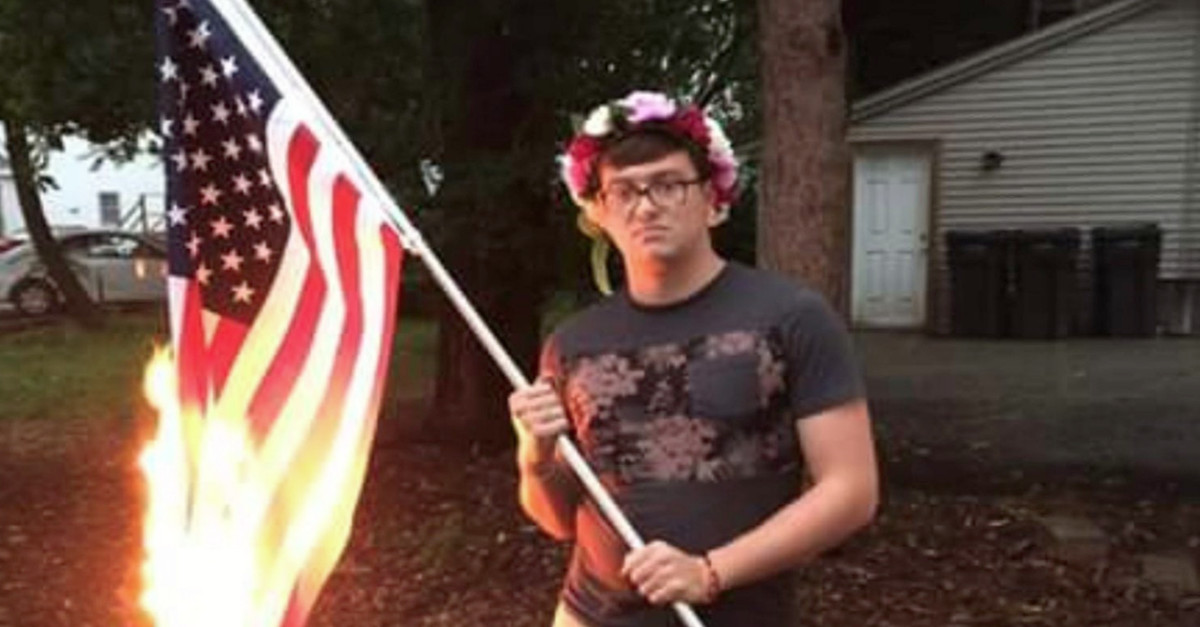 A man who was arrested after photos of him burning a flag incensed the internet will not be charged, according to the Illinois State Attorney. Bryton Mellott, 22, posted multiple pictures of himself holding a burning American flag July 3, along with a statement about why he is not proud to be an American.

?In this moment, being proud of my country is to ignore the atrocities committed against people of color, people living in poverty, people who identify as women, and against my own queer community on a daily basis,? Mellott wrote, according Fox59 . ?I do not have pride in my country. I am overwhelmingly ashamed, and I will demonstrate my feelings accordingly. #ArrestMe.?

Urbana police started getting calls about the photos and investigators saw the growing number of threatening comments against Mellott, his employer Wal-Mart, as well as other employees.

?Given the volume of responses and specificity of threat against his place of employment (a location where an act of violence would likely cause harm to others), prompted police involvement in this case,? Urbana Lt. Joel R. Sanders said in a statement.

“The State’s Attorney’s Office is declining to file charges against (Bryton) Mellott as the act of burning a flag is protected free speech according to the US Supreme Court decision, Texas v. Johnson, 491 US 397 (1989),” Champaign County State’s Attorney Julia Rietz said in statement. “This statute was the basis for the decision by Urbana Police officers to arrest Mellott. While that statute remains in effect, it is contradictory to the US Supreme Court ruling in Texas v. Johnson.  We will be discussing this issue with our local legislators and asking that they consider reviewing this statute given the constitutional issues it presents.”

Urbana police stood by their decision.

?Laws dealing with questions of Constitutional rights are extremely complex,? Urbana Police Chief Patrick J. Connolly wrote in a statement. ?The Urbana Police Department recognizes that this is a case where the right of free speech may have been in conflict with the safety of innocent and uninvolved citizens. Our officers strive every day to achieve a balance between public safety and preservation of Constitutional rights. In this circumstance, our officers acted in good faith and in reliance on a state law that was passed by our legislature in an attempt to do just that. We respect the analysis of the State?s Attorney?s Office and their determination not to proceed with the prosecution in this matter.?