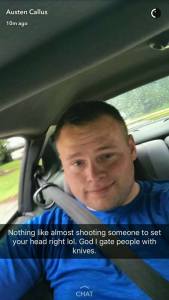 A Pinellas County Sheriff’s deputy is out of a job after a callous post on Snapchat was brought to the department’s attention.

In the picture, then-Deputy Austen Callus posted a selfie with the caption “Nothing like almost shooting someone to set your head right lol. God i gate [sic] people with knives.”

(Here, “gate” is almost certainly a misspelling or accidental autocorrection of “hate.”)

RELATED: The police are investigating a Florida mom after she posted a video of a snake biting her baby

The post was screencaptured and shared widely on social media, where it attracted near-universal negative reactions.

“If you make that kind of a statement, you’re not going to be employed here as a deputy sheriff because it calls into question your thoughts, your motives, and certainly leaves the deputy and the agency in a very bad situation if something were to happen in the future.”

The Tampa Bay Times reports that one of Callus’ friends reported the photo along with others that were taken on- and off-duty and posted to Snapchat.

In firing Callus, Sheriff Gualtieri added that friends said he’d recently been dumped by his girlfriend and had been drinking heavily in the aftermath.

“We can’t have somebody as a deputy who makes that kind of a statement when he’s going through all this personal turmoil that’s going on,” said Gualtieri.

More From: What's wrong with people