A former teacher at Sioux Center Christian School in Sioux Center, Iowa, faces 140 charges stemming from the alleged abuse he committed while teaching at the school.

Police announced the charges against 35-year-old Curtis Van Dam Wednesday, following his arrest last month — only days before his 36th birthday. The investigation into the disgraced educator began on Oct. 18, following a complaint lodged with the Sioux Center Police Department. Over the next few weeks, the authorities discovered a tale of abuse that stretched all the way back to August 2013 and ended only the day before the investigation began, WHO reports.

Initial reports stated that Van Dam faced 84 charges, but further investigation pushed that number to 140. The charges include:

The allegations have shaken the small community to its core, and on Wednesday, the school released a lengthy public statement. Administrator Josh Bowar stated that Van Dam was fired on Oct. 19 and said that “we need to remember that though the charges are many, it also means that many students are no longer carrying secrets,” he then directly addressed the students, writing, “We want you to know that we consider you brave for telling your parents, the police, and the interviewers what happened to you. We praise God that your testimony has brought to light a dark secret that none of us adults knew was there.”

Police Chief Paul Adkins told KDLT that “emotions are high, from embarrassment to sadness to resentment to anger,” adding that the arrest “has really shaken the community.” Court documents show that Van Dam was released on $5,000 bond and that a no-contact order was issued. Adkins said that the suspect is married with two children and that he spent 13 years as a teacher at the school and was an active member of the church.

RELATED: Charter school teacher under investigation for sexual relations with a student

After the initial arrest, more students came forward, which led to the increase in charges before his arraignment on Nov. 7. Chief Adkins told KSFY that in his 44 years on the force “we have never had anything like this happen.” The police department is not releasing information on whether the victims were male or female, but Adkins did confirm that all the victims are under the age of 14.

The Sioux County Police department is small, with only ten officers on the force, but Adkins said that all of his men and women worked together in the investigation, adding, “I’m extremely proud of the job they’ve done.” While the allegations have rattled the small mid-western community, the police chief says that he believes they’ll come through even tougher, saying, “We are a very strong and united community.”

Of the charges, 101 are felonies, and 39 are misdemeanors. If found guilty, Van Dam could spend the rest of his life behind bars. He has not released a statement, and it’s unclear if he has legal representation. 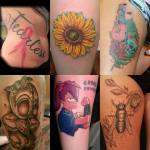