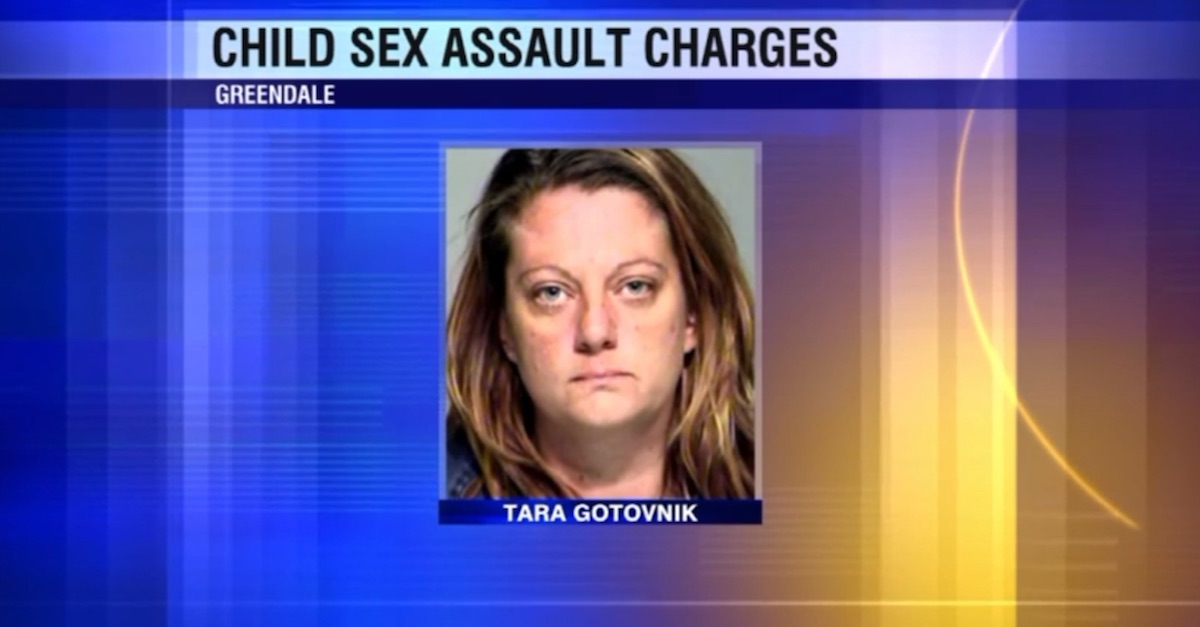 A 35-year-old woman from Milwaukee, Wisc., woman faces a first-degree sexual assault charge after a 10-year-old boy’s father reported her to the police for drugging the child’s slushie with sleeping pills and forcing him to watch and perform sex acts.

According to WGN-TV, Tara Gotovnik allegedly put sleeping pills in the victim’s slushie, making him powerless to overcome double vision, slurred speech, the removal of his clothes and finally being forced to perform a sex act. She was also accused of using sex toys on the victim, items that were found at the scene of the alleged crime, along with pill containers. The victim also said the pills caused him throw up and urinate on himself.

RELATED: When a mom and daughter?s unlicensed massage parlor got a little too hands on, someone tipped off the cops

Gotovnik even admitted when questioned by police that, though she claimed she remembered nothing of the night of the incident, she had given the boy Ambien on two other occasions, including the night in question.

The woman is further accused of telling the boy he could ?go online and make money for doing it.”

The Milwaukee Journal Sentinel reported that it was the boy’s father who reported the assault on Aug. 7. The father picked up his son at Gotovnik’s house and the boy said that he never wanted to go back there. The relationship between Gotovnik and the victim has not been disclosed.

RELATED: A couple exposed having sex in a public library parking lot did the unthinkable when called out by a mom and son

Due to the first-degree sexual assault of a child charge and the related charge of delivery of a controlled substance, Gotovnik faces at 25 years in prison.