When an undercover police officer posing as a “John” showed up at an Allegheny County, Pa., home after a woman told him a “a quick visit” would cost him $60, he found something much worse than prostitution.

Malinda Chalmers, 41, and Brittany Vareha, 27, were arrested last week for prostitution, but the undercover detective who busted them also found hard drugs and paraphernalia everywhere, including in a living room where a 4-year-old boy was playing.

RELATED: This woman agreed to swap $25 and chicken McNuggets for sex, but what she got instead was a whole lot worse 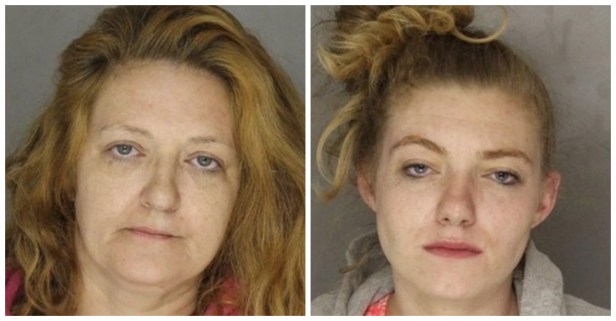 According to PennLive, the detective called up a phone number on an “Escort Babylon” internet ad and scheduled an appointment with one of the women.

When he got there, he was taken to the third floor by Vareha to meet Chalmers. The detective told police waiting outside to enter the home when he believed Chalmers was going to perform a sex act.

A search the ensured revealed that three others were staying in the home, including a 39-year-old man, a 15-year-old boy and a 4-year-old boy.

Chalmers, WTAE reported, agreed to be interviewed by the detective and she directed him right to a drawer to get her ID. Instead, he found a boatload of no-nos in the drawer.

“[She] directed me to her dresser drawer to get her identification. There were four clonazepam pills, a stamp bag of heroin, two electronic scales, three glass crack pipes and numerous needles in the drawer,” the detective wrote in his report. “I seized the pills, heroin and scales as evidence. The needles and crack pipes were disposed of safely.”

The detective also said the home was “unsanitary,” with bags of trash laying around, a soiled mattress where the 4-year-old boy slept the night before and more drugs.

I also noted unsanitary conditions to include several bags of garbage, some open with garbage flowing from them, in the middle of the kitchen floor on top of pet food strewn across the floor. I also noted a soiled mattress in the back bedroom without sheeting. I discovered that [the 4-year-old boy] slept there last evening. There were additional hypodermic syringes, crack pipes, scheduled prescription medication and heroin found on the third floor all accessible by the occupants of the residence. There were no doors preventing anybody access to the third floor.

RELATED: A Texas massage parlor was exposed as a prostitution ring after these clogged up the plumbing

So, what began as a mere prostitution sting has ended even worse for Chalmers and Vareha.

They have both been charged with endangering the welfare of children and prohibited acts, while Chalmers was also charged with prostitution and possessing instruments of crime.