When a man in an SUV saw what was crawling on his visor, he went right off the road 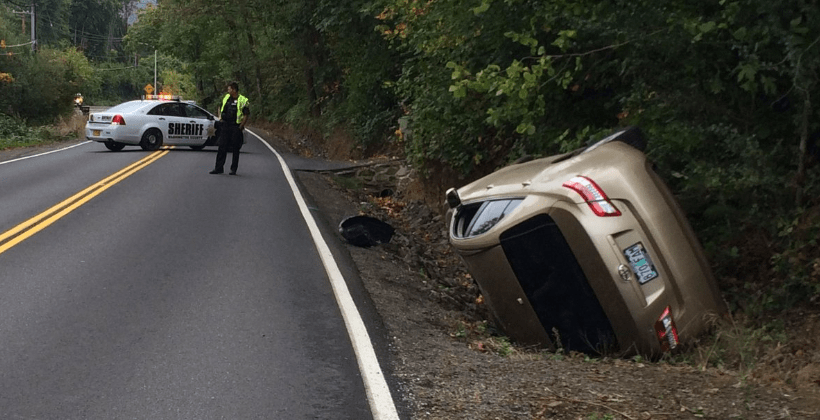 A 26-year-old Michigan man driving along in his SUV Sunday morning around 9:40 a.m. was so spooked by the spider he spied crawling on the visor above his head that he cut his losses and drove right off the road.

While he wasn’t injured, a 29-year-old woman in the passenger seat hurt her wrist.

RELATED: Things didn?t go well for this driver after a creepy visitor stopped by in Oregon

The Leelanau County Sheriff’s Office posted a picture and information on Facebook about the crash.

Here’s what police had to say:

On 5/7/17, at 0940hrs, deputies and Cedar Area Fire and Rescue responded to a single vehicle accident on South Good Harbor Trail near East Gatzke Road. Upon arrival, emergency personnel found a 2005 GMC Envoy off the east side of the roadway. The driver of the GMC was identified as a 26 year old man from Grawn and the passenger was a 29 year old female from Grawn. The driver stated he was northbound on South Good Harbor Trail when he was distracted by a spider on the visor above his head. The vehicle veered off the east side of the roadway, traveling down into the ditch through heavy brush before coming to rest against some trees.

The driver was uninjured but his passenger sustained an injury to her wrist. She was treated at the scene by Cedar Area Fire personnel.

RELATED: A snake got caught in a dangerous redback spider?s web and got a taste of its own medicine during Aussie business hours

Believe it or not, we’ve seen this story before.

Spider season in full swing.Driver not injured after crash when spider drops from mirror on NW Thompson Rd today.BR pic.twitter.com/oV3woHyv9Z

A car rolls down the Bayview Boat Ramp into the river after a spider scared the teen driver. @campricenews #7News https://t.co/LnfQ5DpVMI

Spiders may be small, but they scare the hell out of people. What kind of spider we were dealing with in the latest incident of this kind is not known.