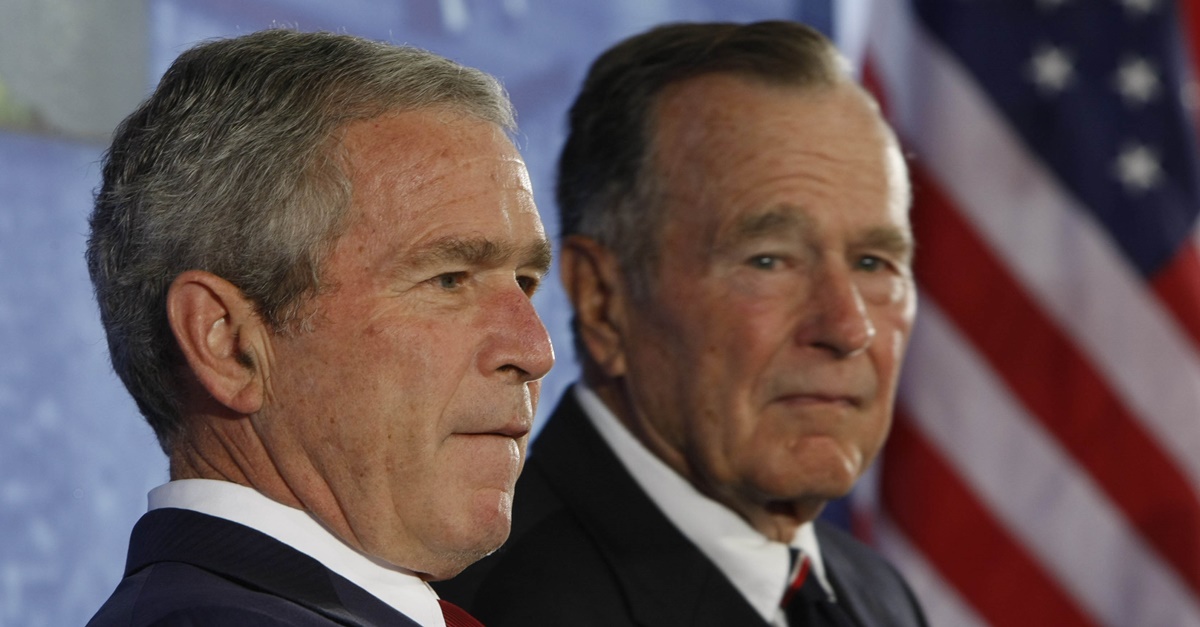 The White House is pushing back after newly released excerpts from a book on former presidents George H.W. Bush and George W. Bush revealed that they both criticized President Donald Trump.

“The Last Republicans” by Mark K. Updegrove, which will be released later this month, was previewed by The New York Times and CNN on Friday and revealed the former presidents’ criticism of Trump, including George W. Bush’s fear that he will be “the last Republican president” despite Trump’s political affiliation.

The book also revealed that George H.W. Bush doesn’t like Trump and called him a “blowhard” when he was running for president.

“I don’t like him. I don’t know much about him, but I know he’s a blowhard. And I’m not too excited about him being a leader,” the elder Bush said.

Neither of the former presidents voted for Trump in the election, and it was revealed that George H.W. Bush voted for Hillary Clinton in the general election.

George W. Bush, on the other hand, left the top of his ballot blank because he didn’t want to vote for Clinton, saying that she has “bad judgment.”

The book’s author spoke with George W. Bush as Trump was sewing up the Republican nomination. The United States’ 43rd president was concerned about the possibility of Trump becoming president but didn’t think he would win the general election.

RELATED: Bush Sr. goes after President Trump in a new book in a way Trump supporters will loathe

“When Trump started to rise, I think he became concerned because he saw this populism of Donald Trump getting in the way of America’s position in the world,” Updegrove told CNN. The author also revealed that George W. Bush was concerned that he would be the “last Republican president.”

“And it wasn’t just about Hillary Clinton becoming president,” Updegrove said. “It was because Donald Trump represented everything that the Bushes abhorred.”

On Saturday, the White House responded to the former presidents’ criticisms, with press secretary Sarah Huckabee Sanders saying in a statement published by The Hill:

The American people voted to elect an outsider who is capable of implementing real, positive, and needed change – instead of a lifelong politician beholden to special interests. If they were interested in continuing decades of costly mistakes, another establishment politician more concerned with putting politics over people would have won.

In another statement to CNN, which was posted on Twitter by CNN’s Ryan Nobles, the White House wrote:

If one Presidential candidate can disassemble a political party, it speaks volumes about how strong a legacy its past two presidents really had. And that begins with the Iraq war, one of the greatest foreign policy mistakes in American history. President Trump remains focused on keeping his promises to the American people by bringing back jobs, promoting an America First foreign policy and standing up for the forgotten men and women of our great county [sic].