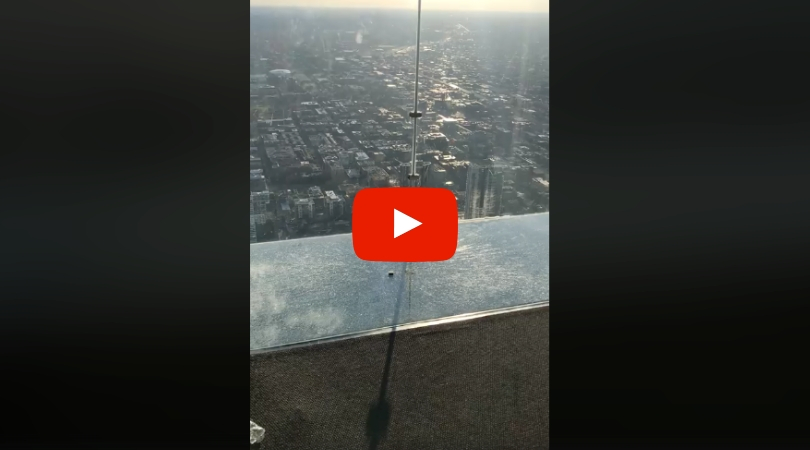 Tourists visiting Chicago’s Willis Towers received a major scare after the building’s glass Skydeck suddenly shattered beneath their feet! The incident occurred on the former Sears Tower’s observation deck on the 103rd floor. Video was captured by a visitor, showing the glass floors, which is designed to give visitors the sensation of floating high above the Windy City.

The glass is clearly splintered into thousands of pieces. Willis officials stated that the part of the Skydeck that broke was actually just the protective layer which covers the actual Skydeck. Lucky, visitors were “never in danger” because the protective layer did “what it was supposed to do.” Which I mean, is great that nobody got hurt, but I’d still be terrified if I saw cracks underneath my feet.

Can you imagine how scared these visitors must have been? Just watching as the glass cracked slowly? Yeah, big yikes! The glass sightseeing box is said to attract more than 1.5 million visitors each year. The ledge is designated to hold up to five tons, and its protective coating is intended to keep the ledge from scratching.

This isn’t the first time cracks appear. Back in May 2014, there was a similar panic after the protective layer also cracked. A tourist also posted a video on Facebook, stating he saw the lines forming in the glass, and immediately moved to the ledge.

Luckily, like in this case, there was no immediate danger. The four Skydeck ledges are a series of clear bays with a glass floor, extending more than 4 feet from the building. Visitors can see the street 1,353 feet below their feet. Each bay is made from three layers of half-inch thick glass. Visitors who go in the boxes can see for 50 miles across four states.Since 2009, over 6 million people have ventured into the ledges, making it a must see when visiting the “windy city.”