With Colin Kaepernick out of a job, another NFL star sits during the national anthem and claims it wasn’t a protest 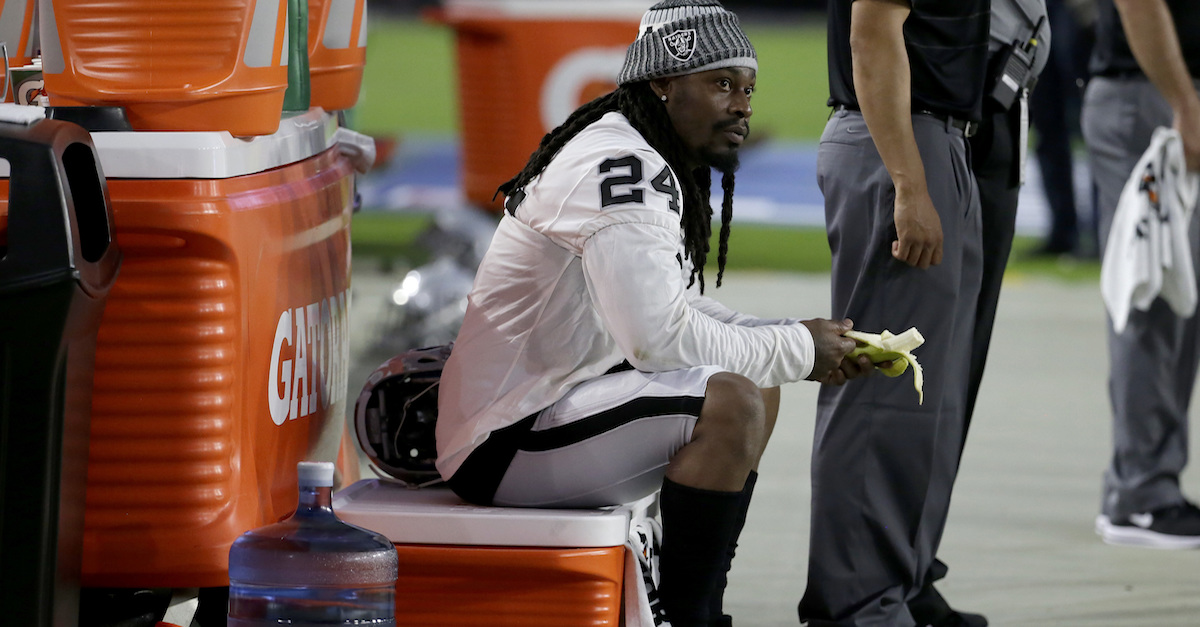 As the debate continues over whether NFL owners have colluded to keep quarterback Colin Kaepernick out of the NFL because of his choice to protest racial injustice and police brutality by kneeling during the playing of the national anthem during last season’s games, another player has emerged to carry on the protest.

The mercurial Marshawn Lynch, who became a star with the Seattle Seahawks and came out of retirement this season to join his hometown Oakland Raiders, took a seat during the playing of the national anthem before Saturday’s preseason game against the Arizona Cardinals in Glendale, Ariz.

But Lynch, who has in the past voiced support of Kaepernick’s stance, said he wasn’t doing anything differently than he’s done during his 11-year career in the NFL — it’s just that apparently no one ever noticed, or cared to notice, that he didn’t stand for “The Star-Spangled Banner.”

On Saturday, Lynch took a seat on an orange Gatorade cooler while the anthem played.

RELATED: An NFL legend details how Colin Kaepernick can save face and get signed

Lynch almost never speaks to the media, and in fact, he was fined $75,000 for not speaking during the Super Bowl’s Media Day in 2015, infamously saying, “I’m just here so I won’t get fined.”

After Saturday’s game, Lynch told Raiders coach Jack Del Rio that he wasn’t protesting anything by sitting down for the anthem. Del Rio then spoke to the media about it during the post-game press conference.

RELATED: A “United We Stand” rally has been planned in NYC for Colin Kaepernick, who is still without a job

“He said, ‘This is something I’ve done for 11 years. It’s not a form of anything other than me being myself,'” Del Rio said. But is that really the case?

The coach told Lynch that he disagreed with his stance, but he was going to allow Lynch be himself.

“Just so you understand how I feel, I very strongly believe in standing for the national anthem but I’m going to respect you as a man. You do your thing,” Del Rio told reporters he said to Lynch. “So that’s a non-issue for me.”

Lynch didn’t play in the exhibition game, and, in typical Lynch style, he was gone from the locker room before reporters arrived to ask him about taking a seat.