A Wisconsin woman accused of decapitating her boyfriend’s head during sex has pleaded not guilty.

Along with that bizarre news, 24-year old Taylor Schabusiness also allegedly severed her lover’s penis, and then placing both the head and penis and in a bucket.

Per WLUK-TV, Schabusiness was arraigned in Brown County Circuit Court on the following charges:

The New York Post added: “A criminal complaint accused Schabusiness of strangling 25-year-old Shad Thyrion to death in February at a Green Bay home, sexually abusing his lifeless body and then mutilating the corpse with a serrated bread knife.”

Police were called to the residence where the incident allegedly took place on the morning of Feb. 23, and upon arrival, discovered a severed head inside a bucket in the basement, the criminal complaint reads. The penis and other body parts were found inside a crockpot.

Schabusiness told police she and her lover were using drugs, including meth, as they began having sex, when the man was strangled. According to the criminal complaint, she then started to sexually abused him — and then dismembered him. She allegedly proceeded to put his body parts in both the home and a vehicle.

“Schabusiness made the comment that at one point, she did get paranoid and lazy and that she thought it was the ‘dope’ that was making her paranoid,” the complaint states.

When police finally did track her down, she had blood on her clothes, the complaint says.

Prior to the incident, Schabusiness had removed an electronic monitoring device she was wearing for a prior incident, police said.

“During a search of her van, cops discovered a crockpot containing human remains, including legs,” the Post wrote. “Under questioning, Schabusiness allegedly said ‘that the police were going to have fun trying to find all of the organs.'”

She added that she did not intend to kill the man, but admitted she had fun strangling him. The sexual play also allegedly involved the use of chains.

Schabusiness told police that of all the knives she allegedly used in the dismemberment, the bread knife “worked the best because of the serrated blade.”

Her defense lawyer has said Schabusiness has been diagnosed with bipolar disorder and has been struggling with mental health issues since middle school.

Schabusiness, however, has been deemed competent to stand trial by a judge, and that trial is scheduled to begin Oct. 24. For now, she’s being held on a $2 million cash bond. 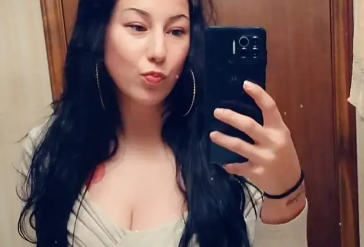