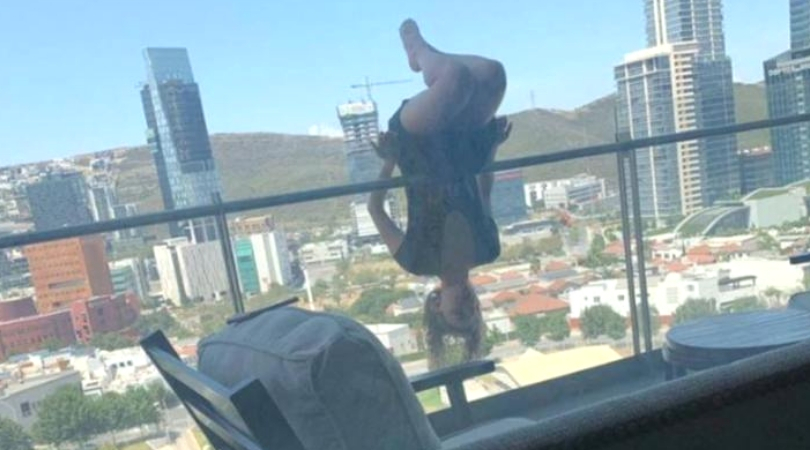 Alright yogis, even you have to know when to quit. If you’re going to do a yoga pose off a freaking balcony, maybe have someone spot you or wear some wires in case the unthinkable happens. Which is exactly what 23-year old Alexa Terrazas should have done while practicing yoga. The Mexican college student was doing an extreme yoga pose on the edge of her sixth-floor apartment balcony, using the guardrail as a prop.

The risky move nearly cost the student her own life after slipping and landing on the pavement outside her building in the northeastern Mexican state of Nuevo Leon. So yes, to say this woman is lucky after an 80-foot fall is an understatement. According to Diario Panorama, a Mexican media outlet, the health and nutrition student at Tecnologico de Monterrey was quickly treated by paramedics with the Red Cross and Nuevo Leon Civil Protection. She was then taken to a local hospital where she underwent an 11-hour surgery.

Dear Yoga Practitioners and fellow teachers is this worth it?
Especially for social media posts?
Let us exercise caution and stay safe.
We need to be healthy and active to stay with our practices. Let us not forget that. 🙏🏼 https://t.co/hdInpmmxsr

The 23-year-old was considered to be in a critical condition, suffering over 100 fractures to both her arms and legs, hips, and head. The young woman is expected to remain in a coma for two weeks due to her structural damages but received several blood donations from family members and friends. Doctors had to reportedly “reconstruct” her legs, stating it may be three years before she ever walks again. When asking her neighbors if they saw the incident unfold, several said they saw her perform the upside-down pose over the side of the terrace, but didn’t know how the woman managed to slip.

The Nuevo Leon Attorney General’s Office confirmed the incident was an accident, stating the balcony’s rail was structurally sound and the injured woman just lost her balance after carrying her entire weight. Now, I get that yoga is “in” lately, but this just seems too much. I don’t care if you have all the balance in the world to carry yourself, you have to know that there might be a chance you might fall to your death. People now a day are too confident when it comes to dangerous stunts. It’s truly terrifying. Let me ask you this, is a social media post really worth broken legs, or worse, your life?