“I have a scar on my forehead from eating my stubborn twin in the womb.”

No, that’s not a quote from a David Cronenberg movie. It’s actually the description of a real-life situation in which a woman explained how she accidentally absorbed her twin sister into her head while in utero, per the New York Post.

Gross as it sounds, the story is picking up momentum on social media thanks to a TikTok clip in which the woman — who goes by the name Kaley — detailed her experience with what is called “vanishing twin syndrome,” or VTS.

VTS is a type of miscarriage that occurs when a twin or multiple embryos dies in utero, disappears or gets resorbed, according to the National Library of Medicine. The expecting mother is then left with what is known as a “singleton pregnancy.”

In the TikTok video, Kaley shows off a facial scar she sustained after eating her twin during the pregnancy.

Woman Shows Off Facial Scar Caused From ‘Eating Her Twin’

“I was a hungry fetus,” Kaley says in the video.

As one would expect, TikTok users had plenty to say about the video in its comments section.

“Oh well uh I’ve got a scar in the shape of a j on my knee,” user Sasha commented.

Our favorite reaction came from user BettyMaria, who simply wrote: “That is very unusual and interesting.”

Multiple users commented how the story reminded them of a scene from My Big Fat Greek Wedding in which Aunt Voula confesses, “Inside the lump was my twin.”

Because some of us haven’t eaten lunch yet, we’ll pass on having a second twin-eating video for dessert. Waiter, check please. 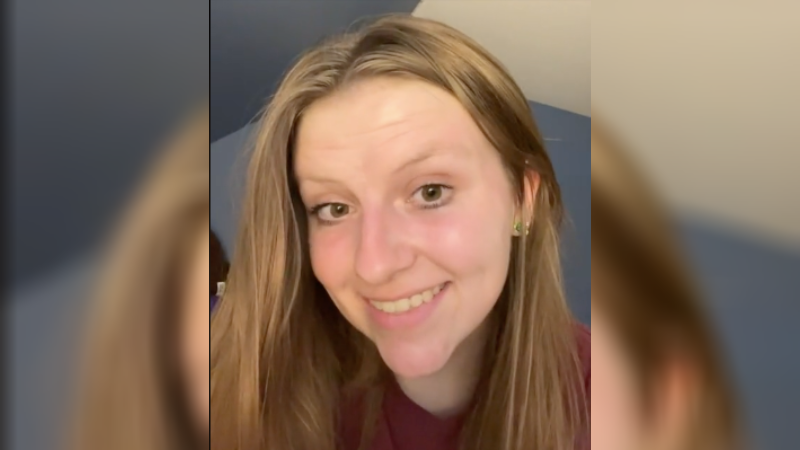