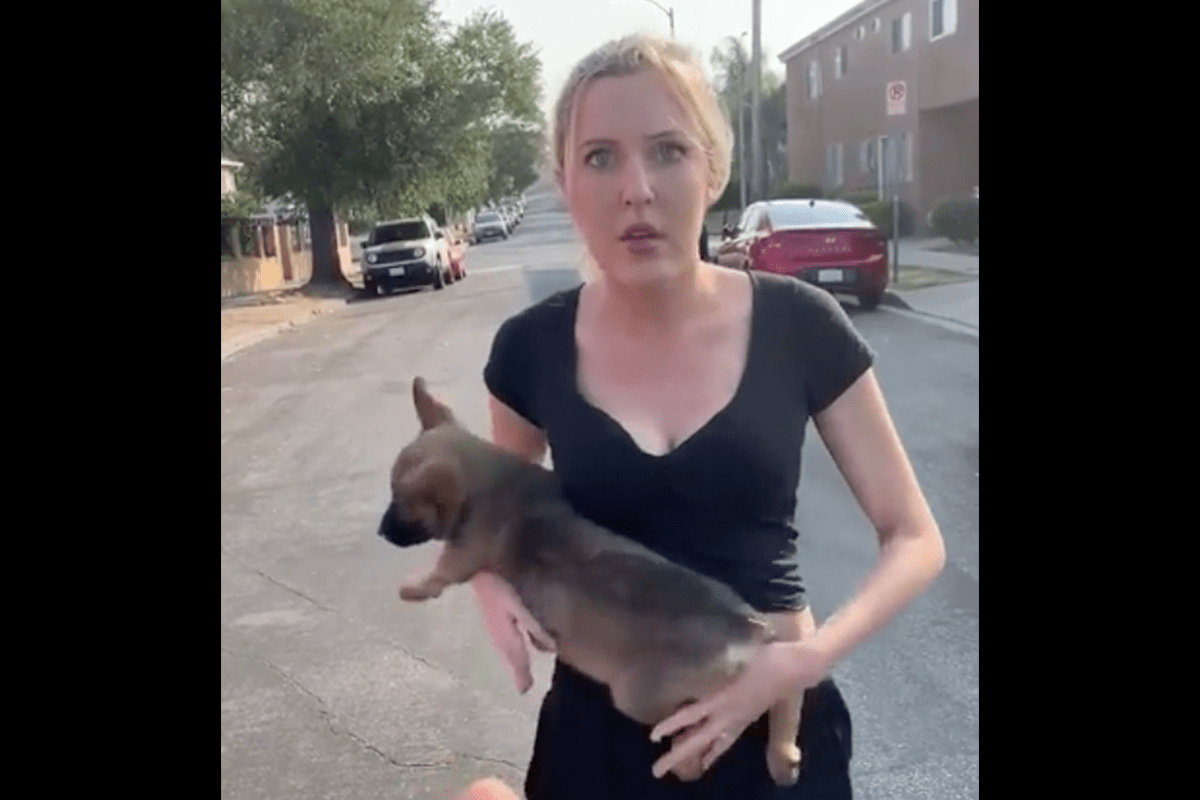 A California woman who claimed to have mental health issues was filmed throwing a puppy at a black man who was filming her as she accosted him with her small, innocent weapon/victim.

Crazy tweaker Karen throws puppy at man 🤬 ( this page does not condone animal cruelty , racism or violence , the videos on this page are posted to inform and spread awareness of things happening on this planet all over the world ) #foocommunity #nojumper #818valley #whatdidijustwatch #caughtontape #caughtoncamera #memesdaily #karens #karensgonewild #latinbeasttv

A trending Instagram video shows a tense, bizarre verbal altercation between a white woman holding a puppy and a man whom she confronted for reasons that are not clear. After a quick back and forth the woman, who appears to be intoxicated, throws a puppy at the man.

The poor puppy immediately squeals in pain and fear as soon as it hits the man. The man then picks up the puppy and comforts it while still filming the altercation. The woman then accuses the man of stealing her dog. The man, who begins to retreat to protect the dog, accuses the woman of being deranged and committing animal cruelty while the oblivious woman asks, “Did you just steal my dog?”

A Better Home Gets a New Dog

Part 2 of the deranged woman who threw the puppy at a stranger. Woman proceeds to go on a psychotic rant while leaning against his window. from PublicFreakout

The woman wasn’t quite done after the first video. As seen on the Reddit forum r/PublicFreakout, she followed the man to his car and began to rant about the Illuminati, the Clintons and a number of other random topics.

Though the altercation and most of all the puppy throw was disturbing, the good news is that the puppy is safe and sound now. The man in the video followed up on Instagram showing the puppy with new, much nice owners.

For everybody asking, yes the puppy is safe hes with his new owner @mulaflare shout out to bro for saving this pupp from that cracked out lady 🙏🏽 #foocommunity #nojumper #foosgonewild #animallovers #dogpictures #viral #explorepage #whatdidijustwatch

For everybody asking, yes the puppy is safe hes with his new owner @mulaflare shout out to bro for saving this pupp from that cracked out lady ?? #foocommunity #nojumper #foosgonewild #animallovers #dogpictures #viral #explorepage #whatdidijustwatch