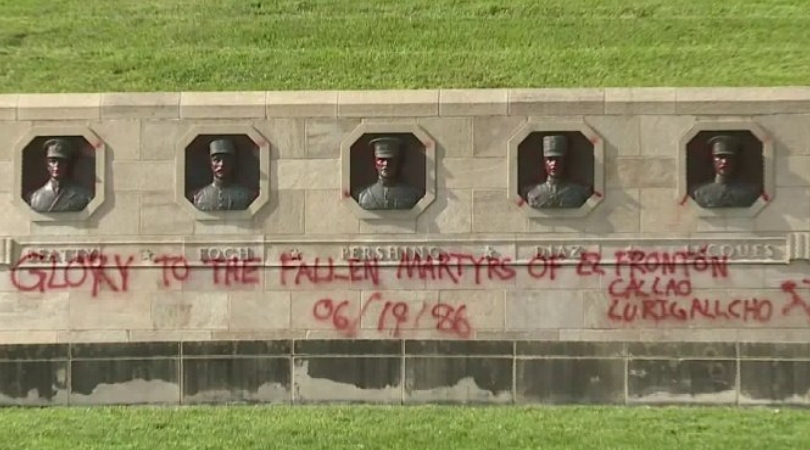 Kansas City police are looking for vandals who spray painted over the National World War I Liberty Memorial on June 18, 2019. According to authorities, officers responded to a call at 12:52 a.m. after reports of property damage. When police arrived at the moment, the callers told officers they saw two individuals defacing the monument with red spray paint but fled before officers arrived.

The spray-painted words read, “Glory to the fallen martyrs,” referring to prison riots on a Peruvian island in 1986. The National WWI Museum quickly tweeted after the incident, saying they were saddened by the act of vandalism, which was built to honor the women and men who served. The Dedication Wall holds the bronze busts of the five Allied leaders: Gen. Baron Jacques of Belgium, Gen. Armando Diaz of Italy, Marshal Ferdinand Foch of France, Gen. John J. Pershing of the United States, and Sir Admiral Earl David Beatty of Great Britain. The vandals also spray painted “Xs” across the leader’s faces.

Unfortunately, the memorial isn’t the only place where officials found graffiti. Kansas’ City’s Northeast News posted two pictures of similar messages that happened along St. John and under the Gladstone bridge near Concourse Park. Volunteers from DSG Equipment and Supplies are helping the museum clean up the monument for no charge.

Authorities stated they are currently looking for two male suspects, but no more information is available at this time. The museum has shared surveillance video with police in hopes of identifying the vandals.