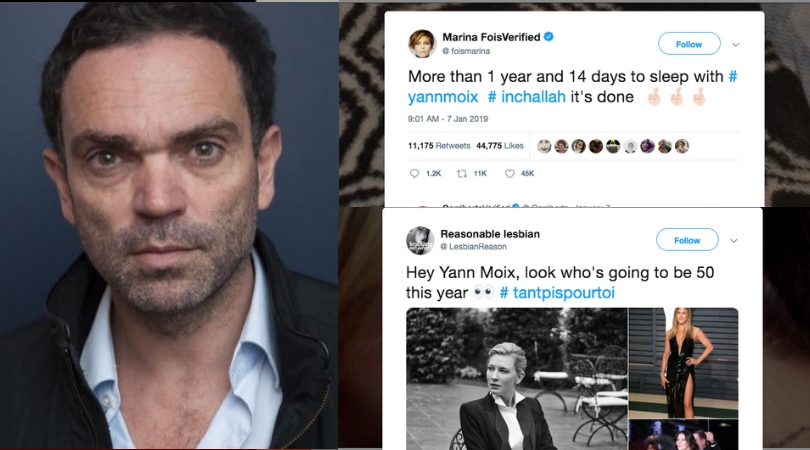 A ?popular? (and very very dumb) French author and television presenter is receiving heavy backlash around the world for saying something that makes no sense whatsoever. 50-year-old Yann Moix publicly claimed he was ?incapable? of loving a woman over the age of 50.

Moix, who need I remind you is 50 himself, spoke with the French Edition of Marie-Claire Magazine, saying, ?Come on now, let?s not exaggerate! That?s not possible ? too, too old.? The author, who is known for his prize-winning novels, added that women in their 50s were ?invisible to him,? preferring ?younger women’s bodies.?

That’s not all. The author also noted that he preferred Asian women, particularly Chinese, Koreans, and Japanese women.

?I prefer younger women?s bodies, that?s all. End of. The body of a 25-year-old woman is extraordinary. The body of a woman of 50 is not extraordinary at all. It?s perhaps sad and reductive for the women I go out with but the Asian type is sufficiently rich, large and infinite for me not to be ashamed.?

Moix has won several literary prizes throughout his career, including the prestigious Prix Goncourt for the first novel and the Prix François Mauriac from the Académie Française for his 1996 debut work Jubilations Vers le Ciel. The author has also directed three films and is the host of a popular TV talk show.

Signed Yann Moix, who only dates Asian women at least 10 years younger than him, because, you know, women have an expiration date.

Safe to say the French writer didn?t get the memo to keep his mouth shut when it came to insulting people and caused severe outrage on social media. His comments circulated online, where several high profile French names responded to his comments. Women and men were bashing the writer, sending him photos of women who were over the age of 50, and had…well, pretty great bodies!

Journalist Colombe Schneck, age 52, published a photo of her…umm, buttocks, to her Instagram account, tagging Moix, calling him an imbecile. The post read, ?Voila, the buttocks of a woman aged 52?what an imbecile you are, you don?t know what you?re missing, you and your tiny, paunchy brain.?

I perfectly understand; I am 53 and just find men of his age almost decomposed, full of health and mental issues. Sorry asian girls, hope you can get some normal men too. pic.twitter.com/sKeMMf1kbm

Others on Twitter responded to Moix’s comments by sharing images of Hollywood celebrities close to the age of 50 such as Halle Berry, Sandra Bullock, Julia Roberts, and Jennifer Aniston to prove the author was wrong.

Moix did respond to his critics saying that this personal preference in women was his own business, and he was only trying to be honest. He said he doesn’t? see his comments as pride, but as a curse, since it wasn?t his fault.

“We are not responsible for our tastes, our penchants, our inclinations,” he added. “I?m trying to be honest. Of course I have a problem, I?m an adolescent, I?m a child and I don?t interest women in their 50s either. They?ve got better things to do than to drag a neurotic around who spends his time yelling and reading and likes doing things that only excite children. It?s not easy to be with me.”

Very Classy Yann Moix, very classy. You?re just sad no 50-year-old will date you. Could it be you’re the invisible one to them? You sure are now. Go home and take a nap, it sounds like you need one. Or maybe just think before you talk, you should know better.