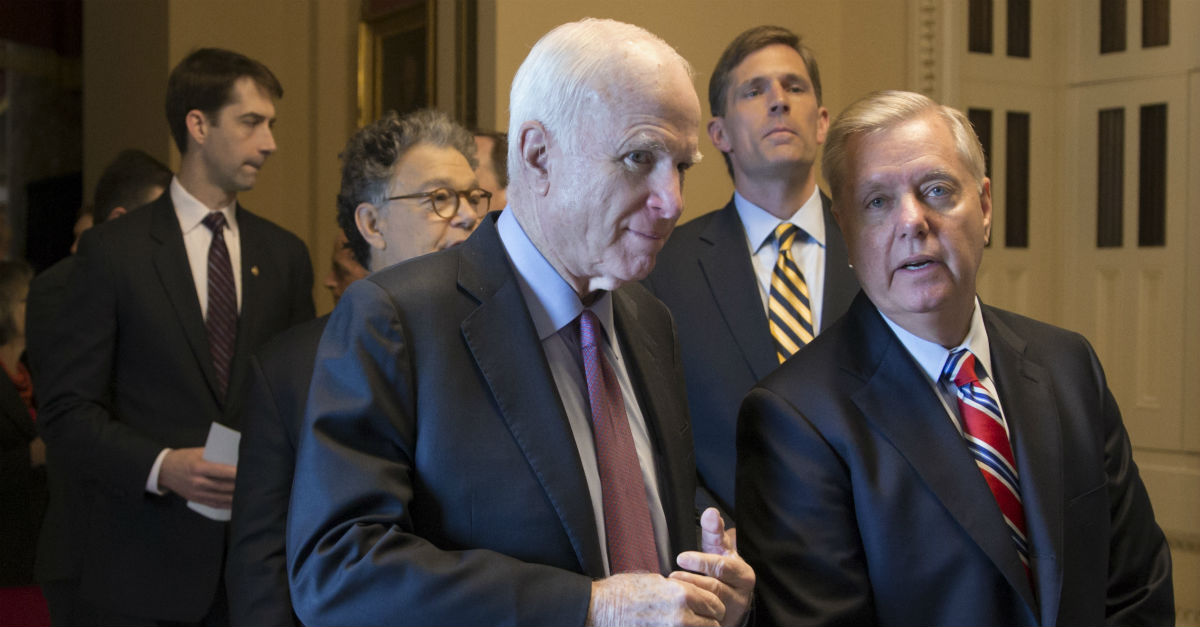 (AP Photo/J. Scott Applewhite)
Senate Armed Services Committee chairman Sen. John McCain, R-Ariz., confers with Sen. Lindsey Graham, R-S.C., right, a member of the panel, as they join other senators on Capitol Hill in Washington, Wednesday, June 8, 2016, walking to attend an address to Congress by India's Prime Minister Narendra Modi. The Senate is working on a plan by Sen. McCain to increase defense spending by nearly $18 billion to pay for equipment and troops the Pentagon didn't request. Standing at rear between them is Sen. Martin Heinrich, D-N.M. and Sen. Al Franken, D-Minn. (AP Photo/J. Scott Applewhite)

On Wednesday night, Republican senators didn’t have much to be happy about. Their Obamacare repeal bill is barely alive, and President Trump told them to stay on the Hill until they get something done. In a last-ditch effort, a group of GOP leaders went late into the night on Wednesday trying to breathe life into the repeal.

"This disease has never had a more worthy opponent." pic.twitter.com/4S6cssfJCv

With the news that Senator John McCain of Arizona has been diagnosed with brain cancer, the Republican health care bill loses yet another vote. On both sides of the aisle, lawmakers offered their thoughts and prayers for the six-term senator. At one point on Wednesday evening, Senator Lindsey Graham of South Carolina stepped out of his office to speak to reporters. Graham and McCain have often been allied voices in the upper chamber, at times irking President Trump.

With his head down and a his suit jacket slung over his arm, a somber Graham said that he spoke with McCain for “literally five minutes” after learning of the diagnosis. He told reporters, “Pray. God knows how this ends, not me. But I do know this: this disease has never had a more worthy opponent.” McCain’s brain cancer is a particularly aggressive type; both Beau Biden and Ted Kennedy lost their battles with the disease after receiving similar diagnoses.