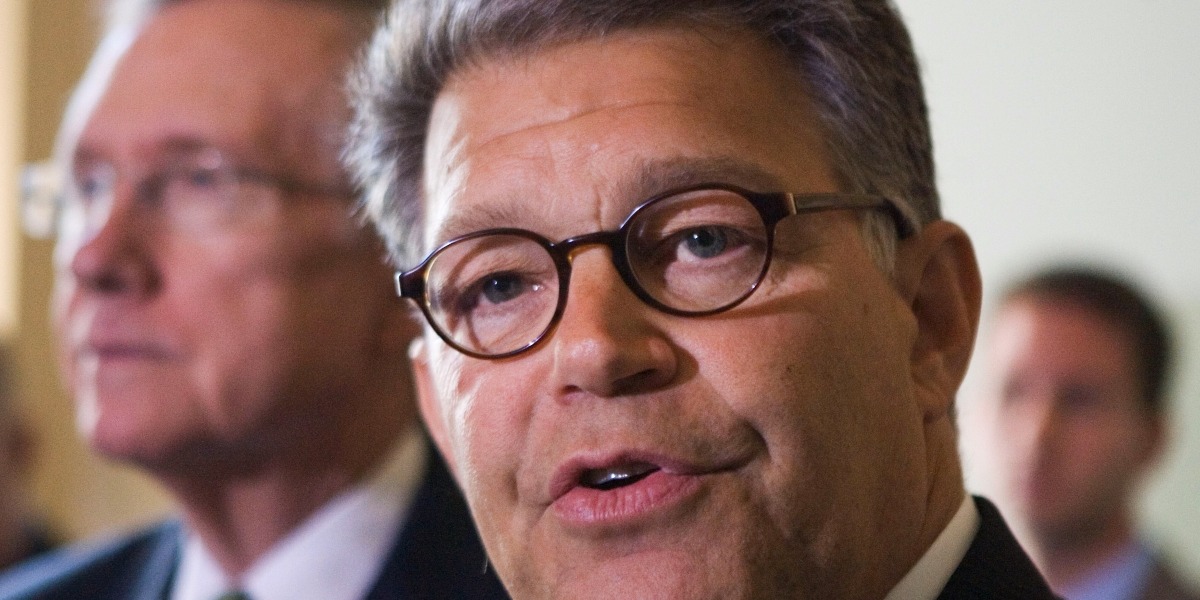 AP Photo/Manuel Balce Ceneta
Minnesota's Democratic Senator-elect Al Franken, with Senate Majority Leader Harry Reid, D-Nev., left, speaks during a news conference on Capitol Hill Monday, July 6, 2009, in Washington. The former Saturday Night Live performer and satirist offered no jokes, just a promise that he is "ready get to work." Franken is expected to be sworn in to the Senate on Tuesday. (AP Photo/Manuel Balce Ceneta)

The list of sexual assaulters and those who have been accused of sexual assault gets longer and longer every single day. Harvey Weinstein. Kevin Spacey. Roy Moore. Roger Ailes. Bill Cosby. Donald Trump. Mark Halperin. Louis C.K. Dustin Hoffman. Steven Seagal. Tom Sizemore. It?s gotten to the point where I automatically assume another impropriety occurred when a celebrity hashtag is trending on Twitter.

As of today, we can add Minnesota Sen. Al Franken to that ever-growing list. In a post, KABC Los Angeles?s Leeann Tweeden recounted her personal experience with Franken during a USO Tour in 2006 when the latter was still an entertainer. After reading it, you just feel plain dirty; you want to take a shower afterward. And, as you?re scrubbing yourself clean, you just may wonder whether mankind has made much progress at all in the realm of civility.

Tweeden?s article, where she alleges that Franken asked her to practice a skit with him as an excuse to forcefully kiss her – and that she ?felt violated all over again? when the former comedian groped her and photographed it when she was asleep – is kryptonite for politicians. You never want to be accused of sexual misconduct when you?re a public figure or hold public office, especially if you also market yourself as an open-minded progressive politician and campaigner for women?s rights.

Franken has since issued an apology for his grotesque behavior (?the fact that my own actions have given people a good reason to doubt that [work on women?s rights] makes me feel ashamed?), but the political damage to the two-term senator is already done. Majority Leader Mitch McConnell quickly called for a Senate Ethics Committee investigation into the matter, which is to be expected (he?s a Republican and Franken is a Democrat, after all). The GOP sees an upside to the Franken allegations because it diverts some of the media attention on the multiple women who have revealed Roy Moore?s disgusting and creepy behavior in the 1970s and 1980s. That?s to be expected.

The rapidity with which Franken?s Democratic colleagues have distanced themselves from the senator, however, means that he?s in serious trouble. Senate Minority Leader Chuck Schumer followed McConnell?s lead and demanded a full investigation from the Ethics panel. Progressive activist groups that are normally solid allies of Franken like the chairman of Priorities USA and Women?s March are tweeting out statements that Franken should be held accountable for his actions and that sexual assault or harassment is never funny. Sen. Kirsten Gillibrand of New York, someone who?s working on sexual harassment legislation at precisely this moment, all but equated the allegations against Franken with those against GOP Senate candidate Roy Moore (?I feel very strongly that Roy Moore should not be a senator, and I feel strongly that, if he is elected, that the Senate should have its own response to it.?). Democratic candidates for Congress who previously received money from Franken?s PAC are now donating that money to charity, understanding that associating with him in any way would be campaign fodder for the GOP incumbents they are trying to defeat next year.

It?s very hard to sketch out a scenario where Franken doesn?t resign his seat. He?s lost the respect of many of his Democratic colleagues, has humiliated the state he has represented in the Senate since 2009 and is damaged political goods. The only question is how hard Franken decides to fight the allegations levied against him and whether he chooses to make a deal with the Ethics Committee, whereby he leaves the chamber in exchange for the investigation being dropped.

RELATED: President Trump chimes in on Senator Franken?s groping photo and it is a doozy

Or, I could be completely wrong and be misreading the entire situation. Some Democrats might forgive him, arguing that while his actions in 2006 were unworthy of decent human behavior, he?s expressed remorse and recognizes what he did was wrong. But, for Democrats to take that position, they would have to contort themselves into being absolute, shameless hypocrites without moral principle – particularly when so many are hoping to clean up Capitol Hill?s act on this problem. The Democratic congressional leadership and the various Democratic Super PAC?s hoping to turn the Senate blue next year are already working hard, but a Franken resignation would mean they?d have to work harder.