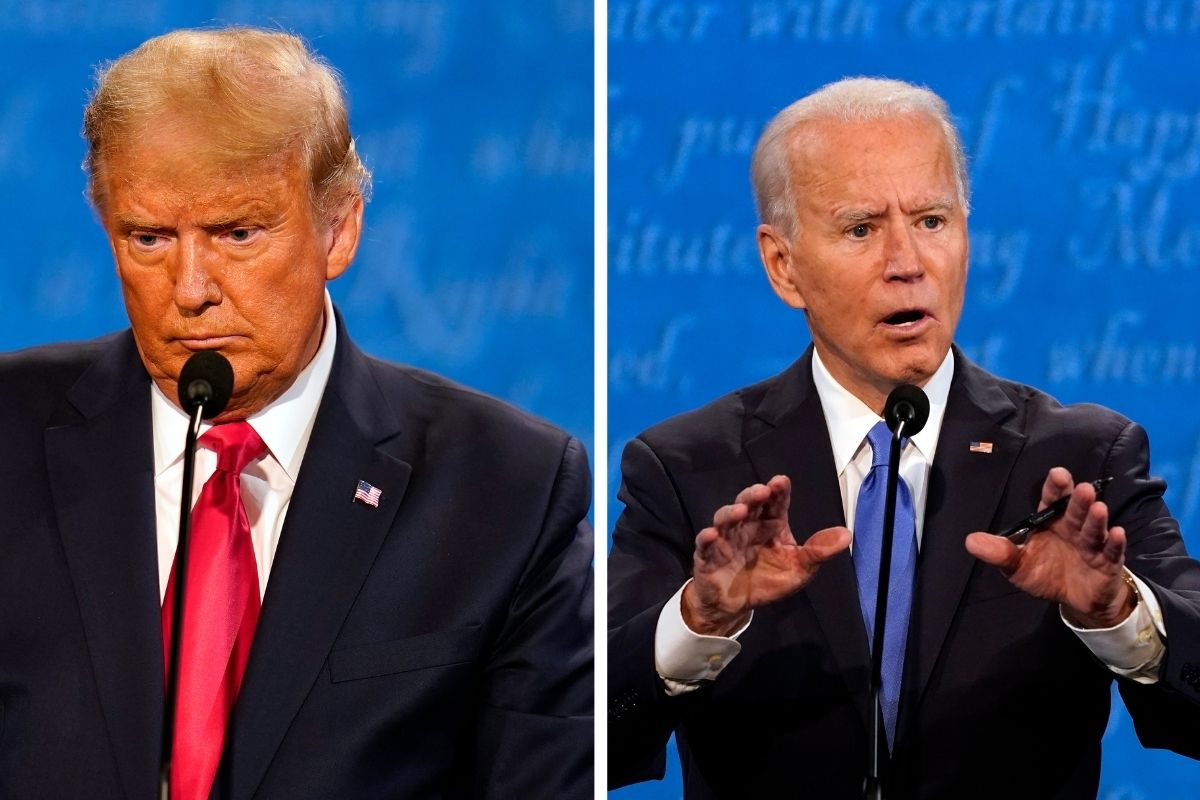 NASHVILLE, Tenn. (AP) ? President Donald Trump and Democratic challenger Trump, Biden Fight Over COVID-19 Rise, Climate and Race Joe Biden fought over how to tame the raging coronavirus during the campaign’s closing debate, largely shelving the rancor that overshadowed their previous face-off in favor of a more substantive exchange that highlighted their vastly different approaches to the major domestic and foreign challenges facing the nation.

The Republican president declared the virus, which killed more than 1,000 Americans on Thursday alone, will ?go away.? Biden countered that the nation was heading toward ?a dark winter.? ?Anyone who is responsible for that many deaths should not remain as president of the United States of America,? Biden said.

With less than two weeks until the election, Trump portrayed himself as the same outsider he first pitched to voters four years ago, repeatedly saying he wasn?t a politician. Biden, meanwhile, argued that Trump was an incompetent leader of a country facing multiple crises and tried to connect what he saw as the president?s failures to the everyday lives of Americans, especially when it comes to the pandemic.

The president, who promised a vaccine within weeks, said the worst problems are in states with Democratic governors, a contention at odds with rising cases in states that voted for Trump in 2016. Biden, meanwhile, vowed that his administration would defer to scientists on battling the pandemic and said that Trump’s divisive approach on suffering states hindered the nation’s response.

?I don?t look at this in terms of the way he does ? blue states and red states,? Biden said. ?They?re all the United States. And look at all the states that are having such a spike in the coronavirus ? they?re the red states.?

After a first debate defined by angry interruptions, the Thursday event featured a mostly milder tone. And in a campaign defined by ugly personal attacks, the night featured a surprising amount of substantive policy debate as the two broke sharply on the environment, foreign policy, immigration and racial justice.

When Trump repeatedly asked Biden if he would ?close down the oil industry,? the Democratic standardbearer said he ?would transition from the oil industry, yes,? and that he would replace it by renewable energy ?over time.? Trump, making a direct appeal to voters in energy producing states like Texas and the vital battleground of Pennsylvania, seized upon the remark as ?a big statement.?

Final 2020 presidential debate preview: What you need to know https://t.co/EzTnbdAZzA

As the debate swept to climate change, Trump explained his decision to pull the U.S. out of the Paris climate accord negotiated in 2015, declaring it was an unfair pact that would have cost the country trillions of dollars and hurt businesses.

Trump repeatedly claimed Biden?s plan to tackle climate change and invest in green industries was developed by ?AOC plus three,? referring to New York Rep. Alexandria Ocasio-Cortez. Biden chuckled during much of Trump?s answer and said, ?I don?t know where he comes from.?

On race, Biden called out Trump’s previous refusals to condemn white supremacists and his attacks on the Black Lives Matter movement, declaring that the president ?pours fuel on every single racist fire.”

?You know who I am. You know who he is. You know his character. You know my character,” Biden said. The rivals’ reputations for ?honor and for telling to truth? are clear, he said.

Trump countered by pointing out his efforts on criminal justice reform and blasting Biden’s support of a 1990s Crime Bill that many feel disproportionately incarcerated Black men. Staring into the crowd, he declared himself ?the least racist person in this room.”

These were Biden's greatest moments during the final presidential debate #Debates2020 pic.twitter.com/oVt0OQjmPg

Turning to foreign policy, Biden accused Trump of dealing with a ?thug? while holding summits with the leader of North Korea, Kim Jong Un. And closer to home, the former vice president laced into the Trump administration’s policy of separating children from their parents trying to illegally cross the southern border.

Biden said that America has learned from a New York Times report that Trump paid only $750 a year in federal taxes while holding ?a secret bank account” in China. The former vice president then noted he?s released all of his tax returns going back 22 years and challenged the president to release his returns, saying, ?What are you hiding??

Trump said he closed his former account in China and claimed his accountants told him he ?prepaid tens of millions of dollars? in taxes. However, as he has for the past four years after promising to release his taxes, he declined to say when he might do so.

Trump said that when it comes to health care, he would like ?to terminate? the Obama-era Affordable Care Act, even amid a pandemic, and come up ?with a brand new beautiful health care,? that protects coverage for preexisting conditions. Biden said the president has been talking about making such a move for years but ?he?s never come up with a plan.?

He also denounced Trump’s claim that Biden wanted to socialize medicine, creating daylight between himself and the more liberal members of his party whom he defeated in the Democratic primaries.

It remained to be seen if Trump, who is trailing in the race, managed to change the trajectory of the campaign. More than 47 million votes already have been cast, and there are fewer undecided voters than at this point in previous election years.

The debate, moderated by NBC?s Kristen Welker, was a final chance for each man to make his case to a television audience of tens of millions. And questions swirled beforehand as to how Trump, whose hectoring performance at the first debate was viewed by aides as a mistake that turned off viewers, would perform amid a stretch of the campaign in which he has taken angry aim at the news media and unleashed deeply personal attacks on Biden and his adult son.

When he feels cornered, Trump has often lashed out, going as negative as possible. In one stunning moment during the 2016 campaign, in an effort to deflect from the release of the ?Access Hollywood? tape in which he is heard boasting about groping women, Trump held a press conference just before a debate with Hillary Clinton during which he appeared with women who had accused Bill Clinton of sexual assault. He then invited them to watch as audience members.

In a similar move, Trump’s campaign held another surprise pre-debate news conference, this time featuring Tony Bobulinski, a man who said he was Hunter Biden’s former business partner and made unproven allegations that the vice president’s son consulted with his father on China-related business dealings.

Trump made similar, if vague, accusations from the debate stage, but exchanges about Hunter Biden did not dominate the night as aides on both campaigns thought might happen. Biden declared the discussion about family entanglements ?malarkey? and accused Trump of not wanting to talk about the substantive issues.

Turning to the camera and the millions of people watching at home, Biden said, ?It?s not about his family and my family. It?s about your family, and your family is hurting badly.”

About the author: Michelle Price
Michelle L. Price is a writer for the Associated Press.
View More Articles