WASHINGTON (AP) — The Latest on President Donald Trump and a whistleblower complaint (all times local):

An official impeachment inquiry is being launched into US President Donald Trump. At a news conference, the US House Speaker Nancy Pelosi said: "The president must be held accountable. No one is above the law."

He’s tweeting that “the Democrats purposely had to ruin and demean it with more breaking news Witch Hunt garbage. So bad for our Country!” Calls for an impeachment inquiry have intensified following reports that Trump may have sought a foreign government’s help in his reelection bid. Trump insists he has done nothing wrong. He said he’ll release a transcript of his phone call with Ukraine’s president.

Trump tweets: “They never even saw the transcript of the call. A total Witch Hunt!”

Speaker Nancy Pelosi has announced the House is moving forward with an official impeachment inquiry of President Donald Trump. Pelosi made the announcement Tuesday from the speaker’s office at the Capitol saying “no one is above the law.”

The move puts the Democratic speaker’s stamp on the investigations that have been underway in the House. Calls for an impeachment inquiry have intensified following reports that Trump may have sought a foreign government’s help in his reelection bid. Pelosi says the president “must be held accountable.”

Her remarks at a closed-door meeting was described by two people familiar with the remarks who were not authorized to discuss them publicly and spoke on condition of anonymity. Pelosi is set to make a formal announcement at 5 p.m. A third person familiar with Pelosi’s remarks but unauthorized to speak publicly says she told Democrats they have reached “a moment of truth” with the president.

She called reports indicating that Trump pressured Ukraine’s leader to investigate Joe Biden’s family “a betrayal of our national security” and a “betrayal of our election.” Trump insists he did nothing wrong when it comes to Ukraine and announced he’ll release a transcript of a phone call with the Ukrainian president.

Dear @realDonaldTrump: You admitted on national TV that you solicited the Ukrainian leader to investigate your opponent. You are also stopping the #WhistleblowerComplaint from going to Congress, which is required by law.

That's why there is an #impeachment inquiry against you. https://t.co/r0WgyK5Nbs

The GOP-controlled Senate has approved a nonbinding but symbolically important resolution calling on the Trump administration to immediately provide the House and Senate intelligence committees a copy of a whistleblower complaint involving President Donald Trump.

The measure put forward by Minority Leader Chuck Schumer passed by voice vote after Majority Leader Mitch McConnell endorsed the idea and noted that the bipartisan leadership of the Senate Intelligence Committee was working behind the scenes to obtain the complaint.

Trump is alleged to have pressured the government of Ukraine to look into former Vice President Joe Biden, one of the front-runners for the Democratic nomination. House Speaker Nancy Pelosi announced Tuesday that the House would vote on a similar resolution on Wednesday.

Rep. Alexandria Ocasio-Cortez reacts to the start of an impeachment inquiry into President Trump: "What he has already admitted to is an impeachable offense, among others" https://t.co/OAdEK24aEU pic.twitter.com/zd6r0Hcw4T

President Donald Trump is asserting that a formal impeachment inquiry by House Democrats would be a “positive for me.” Trump is reacting to news that Speaker Nancy Pelosi will announce an impeachment inquiry following reports that Trump may have sought a foreign government’s help in his reelection bid.

Trump is in New York meeting with world leaders at the United Nations. He says the country is “doing the best it’s ever done” and that Democrats are going to lose next year’s elections if they pursue impeachment. He says: “If she does that, they say that’s a positive for me.” Democrats are expected to explore whether Trump pushed Ukraine’s leader for help investigating Democrat Joe Biden and his son during a summer phone call. Trump said he had authorized the release of a transcript of the call on Wednesday.

Joe Biden says Congress must use its “full constitutional authority” to determine whether President Donald Trump asked the Ukrainian president for dirt on Biden as he runs for the Democratic presidential nomination.

Biden says if Trump doesn’t comply on that and other inquiries, he “will leave Congress … with no choice but to initiate impeachment.” Biden says that would be a tragedy of Trump’s “own making.” He adds that the president apparently believes he is “above the law.” The former vice president spoke Tuesday in Delaware.

Less than 30 minutes after Pelosi announces formal impeachment inquiry, Trump already has a campaign video out making fun of them.

They honestly make it too easy for him. https://t.co/cKtEl9OcBY

House Speaker Nancy Pelosi plans to announce a formal impeachment inquiry of President Donald Trump over allegations that he pressured the leader of Ukraine to investigate Joe Biden’s family.

Pelosi’s likely decision was described to The Associated Press by a person familiar with the decision who was not authorized to speak publicly and spoke on condition of anonymity. Pelosi is set to make an announcement at 5 p.m.

Pelosi had for months resisted calls to start the impeachment process. But the dynamic changed this week as more members of her caucus came out in support, including Democrats from swing districts.

Democrats are demanding information about whether Trump improperly pressured the Ukrainian president to investigate Biden and his son, partly by withholding foreign aid. Trump insists he did nothing wrong and said he will release an unredacted transcript of a call with Ukraine’s leader on Wednesday.

The chairman of the House intelligence committee says a whistleblower who has been blocked by the Trump administration would like to speak to Congress. The whistleblower, whose identity is unknown, lodged a formal complaint with the inspector general for the intelligence community, but the acting director of national intelligence, Joseph Maguire, determined that it could not be forwarded to Congress. The complaint at least partly involves President Donald Trump’s interactions with the leader of Ukraine.

California Rep. Adam Schiff said Tuesday the committee has been contacted by the whistleblower’s counsel and “their client would like to speak to our committee and has requested guidance from the Acting DNI as to how to do so. Schiff said the committee is in touch with the counsel and looks forward to the testimony “as soon as this week.”

House Speaker Nancy Pelosi isn’t tipping her hand about impeachment ahead of an announcement later Tuesday. But she offered hints when speaking at The Atlantic Festival in Washington, saying: “Now we have the facts, we’re ready for later today.”

She said, “We have gotten to this different place, use any metaphor,” offering “crossing the Rubicon” and a “new day is dawning” as examples. She added, “This is a very serious, in a class of its own, (the) discussion that we’re having about the conduct of the president of the United States.” Pelosi spoke as Democratic support for Trump’s impeachment is surging, stemming from his pressure on Ukraine to dig up dirt on Joe Biden.

Democratic presidential candidate Bernie Sanders is reiterating that Congress should start “impeachment inquiries” into President Donald Trump, but is stopping short of calling for a start to efforts to remove the president. Still, he calls it “likely.”

Speaking at a campaign event in Davenport, Iowa, the Vermont senator says, “Enough is enough.” His comments come as House Democrats in Washington appear to be moving closer to launching impeachment proceedings after Trump pressured Ukraine to investigate former Vice President Joe Biden and his son.

Sanders says: “Today, I hope very much that the Judiciary Committee will go forward with an impeachment inquiry.” Sanders had previously expressed support for inquiries into the president, but expressed reservations that the drawn-out impeachment process would be a political boon to Trump.

House Speaker Nancy Pelosi says she will make an announcement Tuesday afternoon after she meets with House chairmen and members of the Democratic caucus. Her comments come as more than a dozen Democrats, many of them moderates, have endorsed impeachment proceedings against President Donald Trump.

The calls come as Democrats have questioned whether Trump improperly used his office to pressure the Ukrainian president to investigate political rival Joe Biden’s family. The administration is withholding a whistleblower complaint at least partly related to that matter from Congress.

This is the day that Speaker Nancy Pelosi began the #impeachment process in earnest.

Your grandchildren will ask you which side you were on.

Joe Biden’s presidential campaign says the candidate plans Tuesday to call for Congress to impeach President Donald Trump if the administration does not cooperate fully with all ongoing House investigations and subpoenas. Biden plans to speak this afternoon from his hometown of Wilmington, Delaware.

Trump has suggested this week that he did indeed bring up Biden and his son, Hunter, in a telephone conversation with the Ukrainian president over the summer. The phone conversation is the subject of a whistleblower’s complaint that Trump pressured Ukraine to investigate Biden and his son. There is no evidence that either Biden did anything wrong. Joe Biden plans today to frame the situation as just the latest in a line of Trump’s abuses of presidential power.

Georgia Rep. John Lewis, the Democratic civil rights icon, has endorsed impeachment proceedings in the House after withholding his opinion on the matter for several months.

Lewis said in a speech on the House floor Tuesday morning that “we cannot delay” and now is the time to act. His comments as Democrats have questioned whether President Donald Trump improperly used his office to pressure the Ukrainian president to investigate political rival Joe Biden and his son.

Rep. Tulsi Gabbard: "Impeachment is something — that is a step that will divide the country and will be worse off for our country." pic.twitter.com/E08LfZqgdI

Lewis is one of the most influential Democrats in his caucus and an ally of House Speaker Nancy Pelosi, who has so far discouraged impeachment. His comments come as several other Democrats endorsed proceedings Tuesday. Lewis said he’s been “patient while we have tried every other path” and “the future of our democracy is at stake.”

The committees have been pushing the Trump administration to turn over a whistleblower complaint that is at least in part related to Trump’s conversation with Ukraine President Volodymyr Zelenskiy, in which Trump is said to have pushed for investigations into Joe Biden and his son. The documents they are requesting include a transcript of Trump’s July 25 call with Zelenskiy.

Senate Democratic Leader Chuck Schumer says he will seek a vote Tuesday on a resolution calling for the Trump administration to provide Congress with a whistleblower complaint that has so far been withheld. The complaint is linked to President Donald Trump’s interactions with the leader of Ukraine. Trump asked the country to investigate the family of Democratic political rival Joe Biden.

Schumer said he would call for the Senate to pass the resolution by unanimous consent, a request likely to be blocked by Senate Republicans. Also Tuesday, New Jersey Sen. Robert Menendez, the top Democrat on the Senate Foreign Relations Committee, demanded the Trump administration investigate the nearly $400 million in Ukrainian assistance that was held up while Trump was urging the country to investigate Biden. 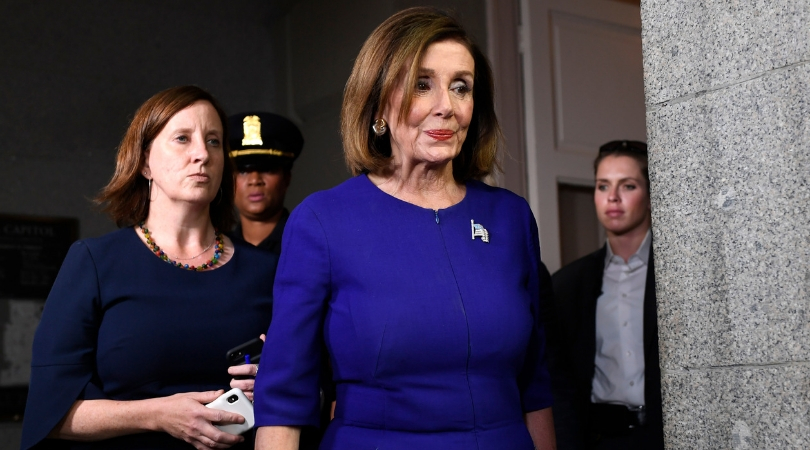