Apparently, Nancy Pelosi only thinks sex crime accusations made against Republicans are worth taking seriously 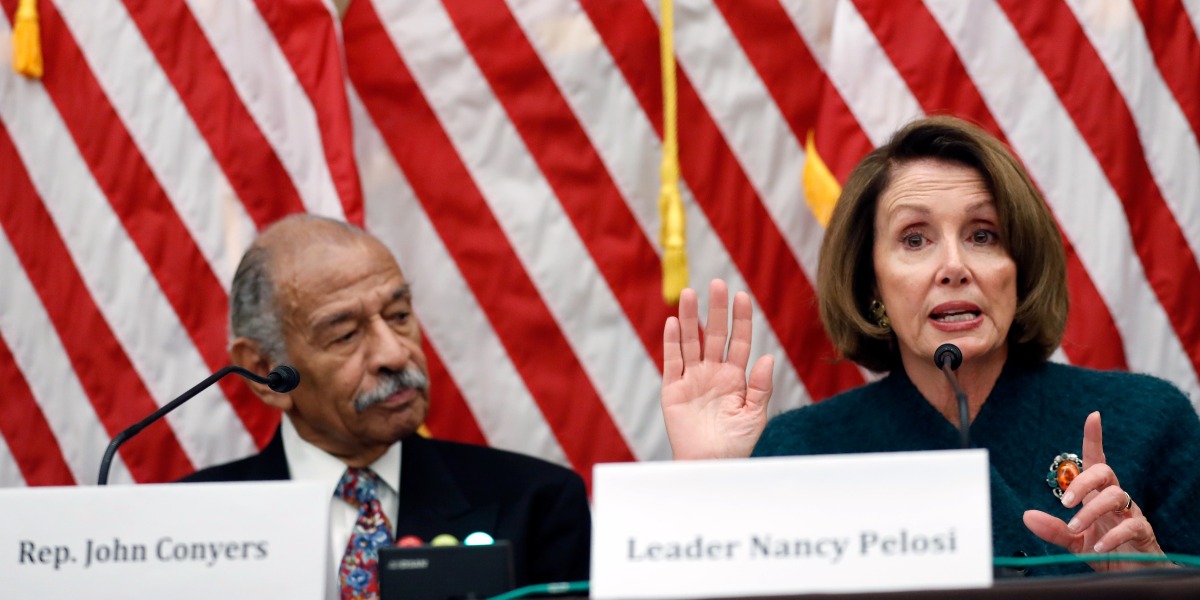 Pelosi called the highest-ranking Democrat on the House Judiciary Committee, who is accused of sexual abuse and harassment, “an icon in our country” who “has done a great deal to protect women.” Then she made it worse by refusing to affirm she believes the women who have accused him.

In the interview, Pelosi tried to obfuscate how many people have accused Conyers.

“We are strengthened by due process. Just because someone is accused — and was it one accusation? Is it two?” asked Pelosi. “I think there has to be — John Conyers is an icon in our country. He has done a great deal to protect women — Violence Against Women Act, which the left — right-wing — is now quoting me as praising him for his work on that, and he did great work on that. But the fact is, as John [Conyers] reviews his case, which he knows, which I don?t, I believe he will do the right thing.”

Pelosi’s answer actually managed to sound as if Conyers’ advocating for legislation that helps women could excuse an alleged sexual abuse or two.

Do you believe the accusers?

Do you believe John Conyers? accusers?

I don?t know who they are. Do you? They have not really come forward. And that gets to-

So you don?t know if you believe the accusations?

Well, that?s for the Ethics Committee to review. …

From Harvey Weinstein to Judge Roy Moore, in any case where a powerful man is accused of using his position to sexually harass women, it’s unlikely that the accusers will have the name recognition that the alleged abusers have. That’s what makes the power imbalance so terrible, after all. Pelosi’s answer also obscures the fact that the accuser was barred from speaking publicly due to the deliberately byzantine process that Congress uses to resolve these cases, forcing her to silently accept the offered settlement, she told BuzzFeed, which has not revealed her identity for fear of reprisal against her.

Pressed by “Meet the Press” host Chuck Todd about whether Conyers doing “the right thing” meant resigning, Pelosi merely repeated that she will rely on him to “do the right thing” —  which seems like pretty odd phrasing, given what he is accused of. Although Conyers maintains his innocence, he settled a 2015 wrongful dismissal case brought by a woman staff member who says she was fired after refusing repeated sexual advances.

Just after the interview aired, it was announced that Conyers planned to step down from his post on the House Judiciary Committee. Pelosi then issued a face-saving statement that said, “Zero tolerance means consequences.”

In the wake of so many scandals hitting powerful figures on both sides of the political aisle, some Democrats have attempted to seize the moral high ground by placing distance between themselves and the men who have been accused. New York Democratic Senator Kirsten Gillibrand has said that in light of the sexual misconduct allegations, then-President Bill Clinton should have stepped down. “What was allowed 25 years ago, will not be tolerated today,” she said. New York Mayor Bill DeBlasio said that he thinks “if any president did that today, they would have to resign.”

But Pelosi refused to even distance herself in her “Meet the Press” interview. Instead, she offered cover for the accused men, preferring to allow Conyers the decision of whether to continue in his powerful post. When pushed by Todd to acknowledge that perhaps the Democrats should have handled the rape and sexual abuse accusations against then-president Bill Clinton in the 1990s differently, she instead pivoted to Trump?s controversial ?grab ?em by the pussy? remarks from last year. Just after saying Conyers should receive “due process,” she called Alabama Republican Senate candidate Roy Moore a “child molester.”

It’s impossible for this to look like anything other than blatant tribalism and hypocrisy. Sexual abuse is only bad if the other side does it, or if there are many accusers that we personally know. If the legislator happens to advocate for laws we like, then he gets a pass or three. These excuses may have worked in the ’90s, but they are particularly tone-deaf and out of step with the nation today.

If “Zero tolerance means consequences” is to mean something — and not just as an ironic slogan — then it must mean something for both parties, and each side must start by finding justice for their victims. Former Speaker Pelosi apparently didn’t get the memo.