The White House’s Most Famous Dogs 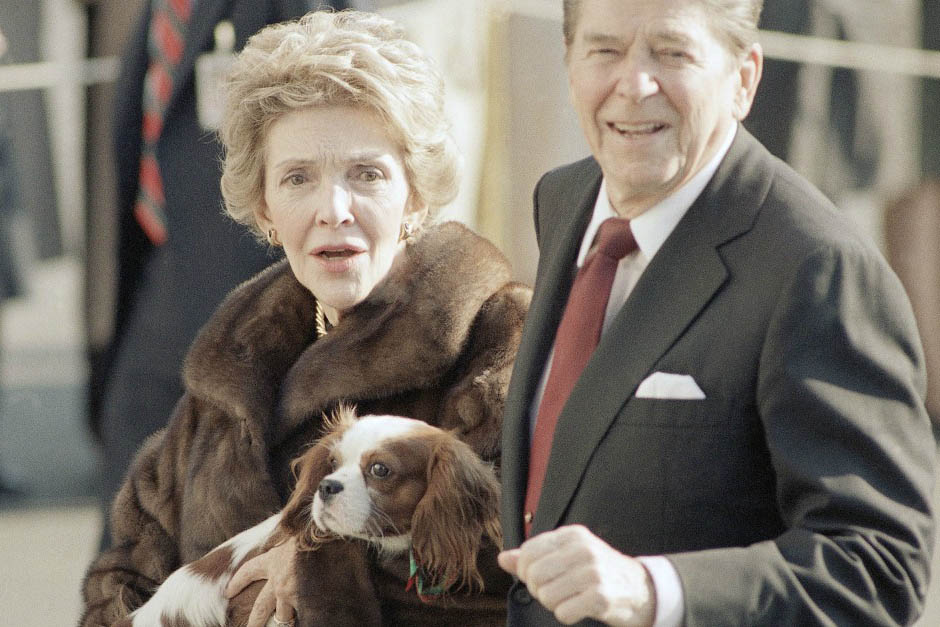 Getting a dog when you move into the White House seems to be an honored American tradition for many of the nation?s leaders and the rest of the First Family. Some come to 1600 Pennsylvania Avenue with their beloved pooches already in tow, while others may get a dog once they realize how isolating the White House can be. Though our first president, George Washington, didn’t start the tradition (despite being a dog owner), U.S. Presidents from Herbert Hoover and FDR to George H.W. Bush and Barack Obama have kept themselves company with a presidential dog.

(In fact, Donald Trump is the first president in a minute to not have a White House pet.)

Presidential pets are so popular that there’s actually a Presidential Pet Museum in Williamsburg, Virginia. Here’s a look at the pets who have ruled the White House (along with their elected masters, of course). Dogs have a long history of aww-worthy moments in the president?s house. 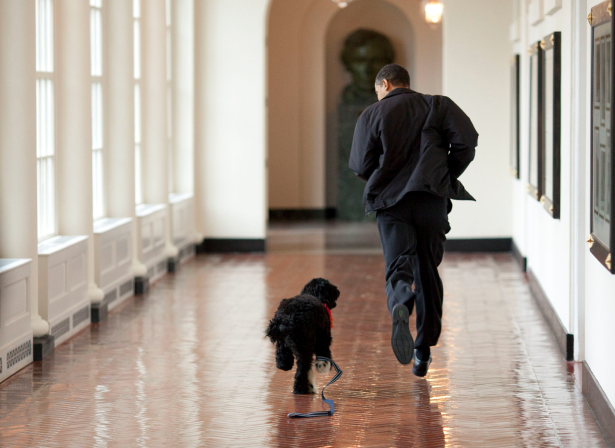 Bo is a male Portuguese Water Dog who kept the Obamas company in the White House from 2009 through 2016. They picked Bo because Obama’s daughter Malia is allergic to dogs and the breed is hypoallergenic. Other breeds in the running included a poodle before the Obamas settled on this cutie. 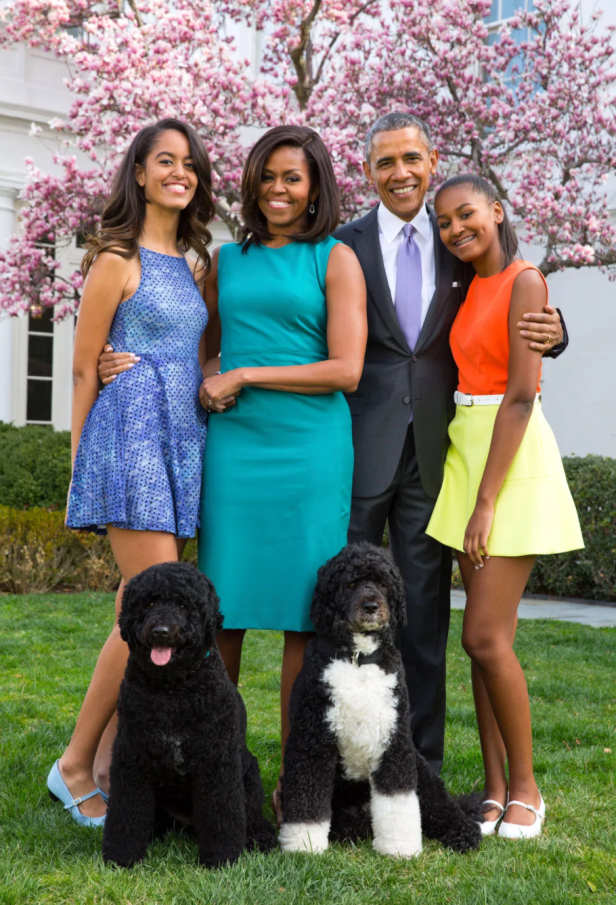 Sunny, another Portuguese Water Dog, joined Bo in the White House in 2013. 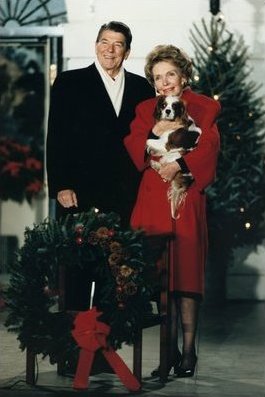 Rex, a Cavalier King Charles Spaniel, joined the Reagans in the White House in 1985 after their previous dog, Lucky, a Bouvier des Flandres, had grown too big to live there and had to be sent back to live on their California ranch. 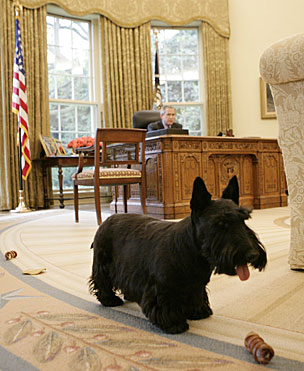 Barney, a  Scottish Terrier, kept the Bushes company during their time in the White House. Russian President and known d-bag Vladimir Putin once remarked that the dog was too small for a respectable world leader to own. The Bushes had another Scottish Terrier by the name of Miss Beazley as well.

Gifted to Nixon in 1969, King Timahoe was an Irish setter. The Nixons came to the White House with two dogs already in the family: daughter Julie?s French poodle named Vicky and Yorkshire terrier, named Pasha.

Though Checkers never actually lived in the White House, the cocker spaniel might be the most famous dog that ever belonged to a president thanks to Nixon’s mention of it in a speech while he was Dwight D. Eisenhower’s VP candidate. 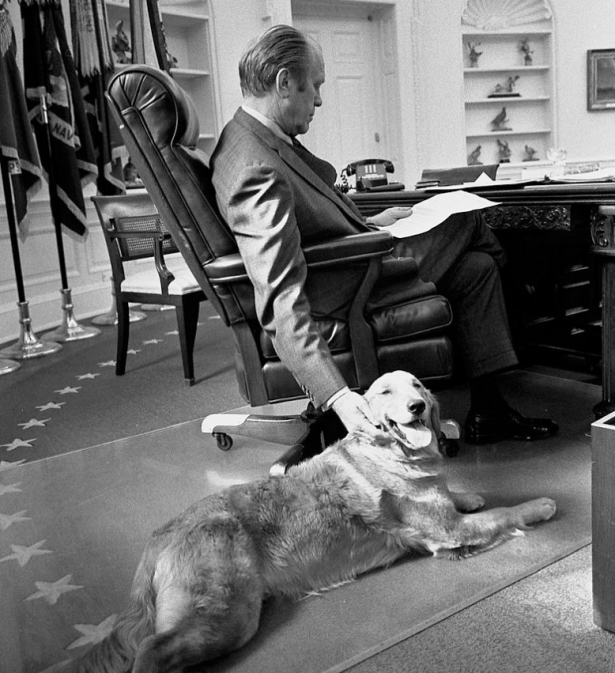 A gift to Ford’s daughter Susan, this Golden Retriever may be the most All-American dog to ever grace our nation’s most famous home. 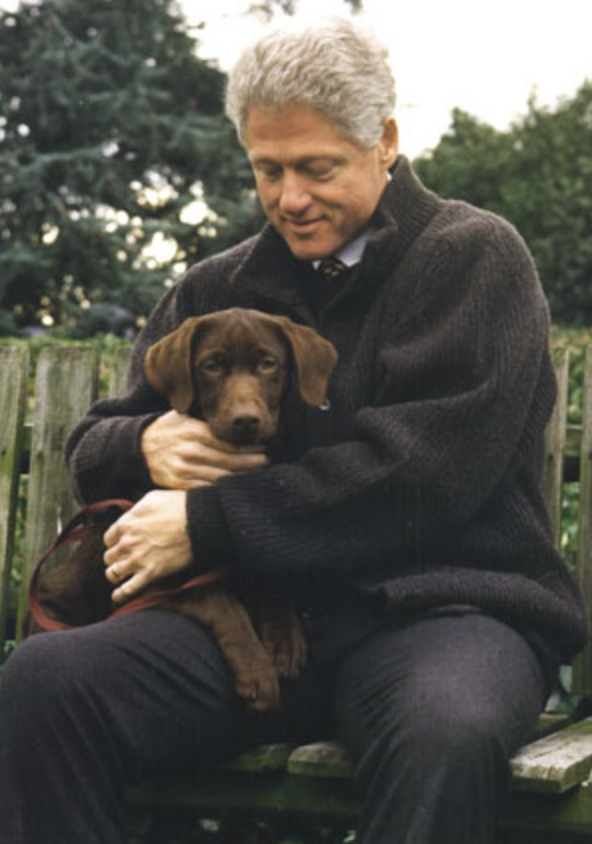 This male, chocolate Labrador Retriever was one of two pets the Clintons kept. The other was a cat named Socks. Naturally, the cat was less inclined to pose for pictures.

Yuki was a true rescue. LBJ’s daughter Luci found the terrier mix at a Texas gas station in 1966.

Johnson and His Beagle ?Him?

President Lyndon B. Johnson, ever the oddball, also owned two beagles named Him and Her. 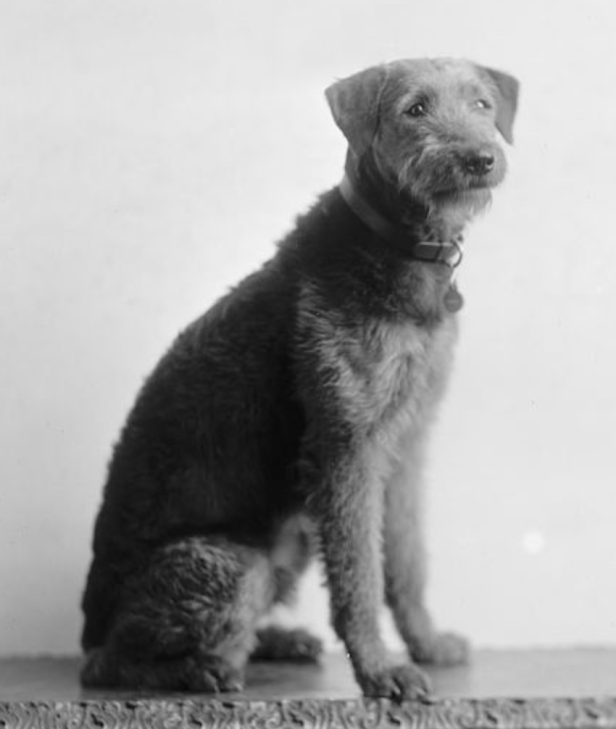 An Airedale Terrier, Laddie Boy was actually quite the celebrity during the Harding administration. 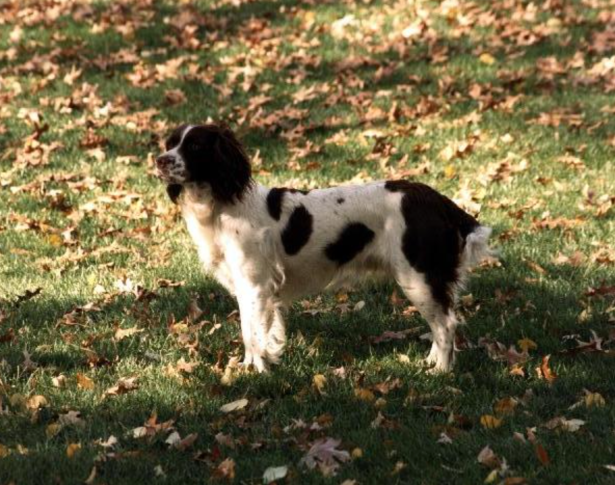 The English Springer Spaniel was once referred to as the most famous dog in White House history (this gets thrown around a lot apparently) because Bush would often mention her in speeches. 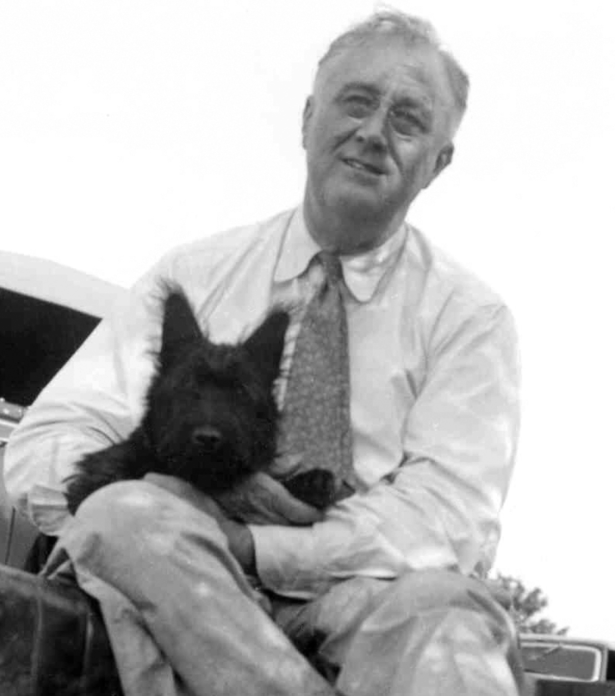 Fala, a Scottish Terrier, could perform tricks and was so beloved by FDR that she traveled with him everywhere, from the Oval Office to the other side of the country. When she passed (seven years after the president) she was buried near him. 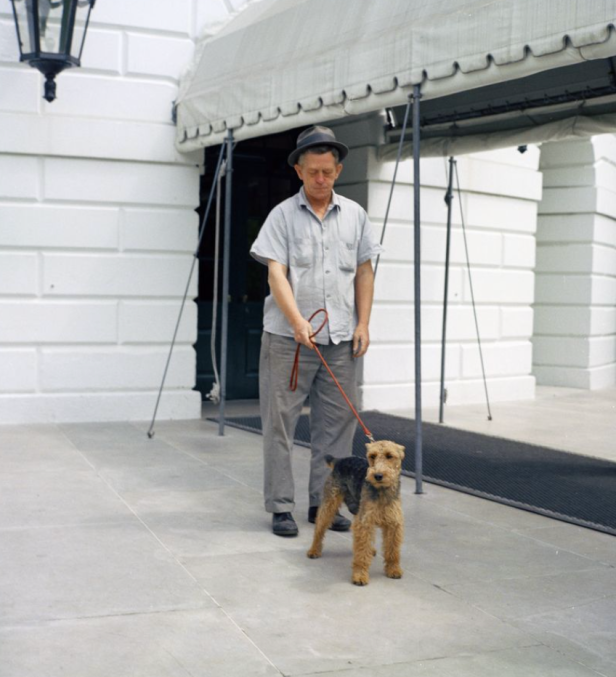 Charlie was a Welsh terrier who JFK, despite his allergies, let live in the White House because he wanted his kids to grow up with pets. (By the way, forget retrievers and labs, the terrier seems to be the presidential pet of choice.) 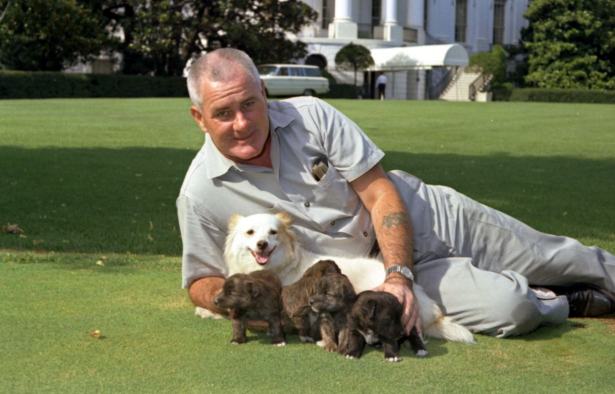 Soviet leader Nikita Khrushchev and Kennedy might have been rivals on the political stage but the two routinely wrote each other and exchanged gifts. One such gift was a dog named Pushinka, whose mother was one of the first dogs to sent into space by the Soviets and return back to Earth alive. Pushinka was a mixed breed whose pedigree was never fully known. Here we see Pushinka pictured on the White House lawn. 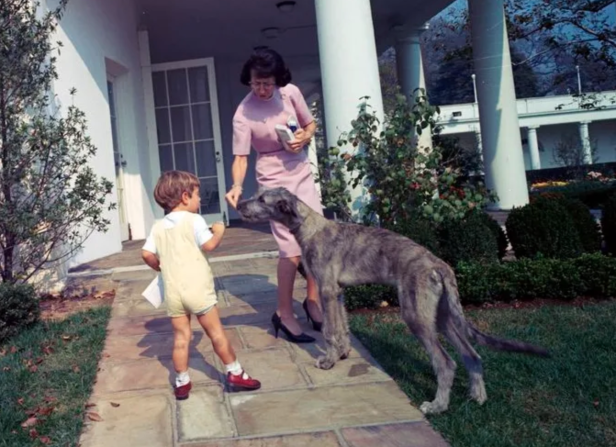 The Kennedys also had an Irish Wolfhound whose name was, appropriately, Wolf. Considering his Irish roots, the pet was a fitting addition to the family.

Theodore Roosevelt had a Whole Pack of Dogs 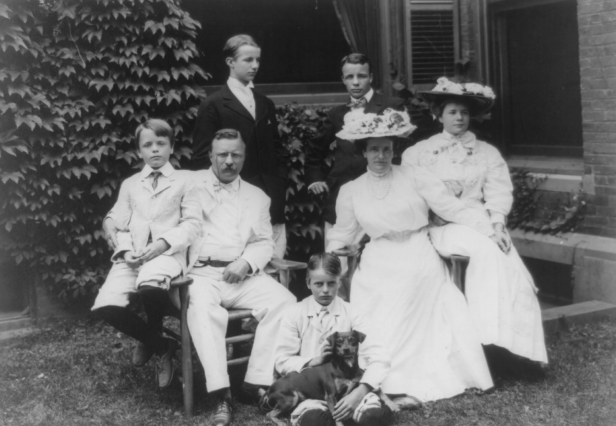 Teddy Roosevelt’s White House featured all manner of animals, including several dogs. There was Sailor Boy a Chesapeake retriever, Jack the terrier, Skip who was referred to as “the mongrel,” and Pete, a bull terrier who bit so many people he had to be sent to live somewhere else. 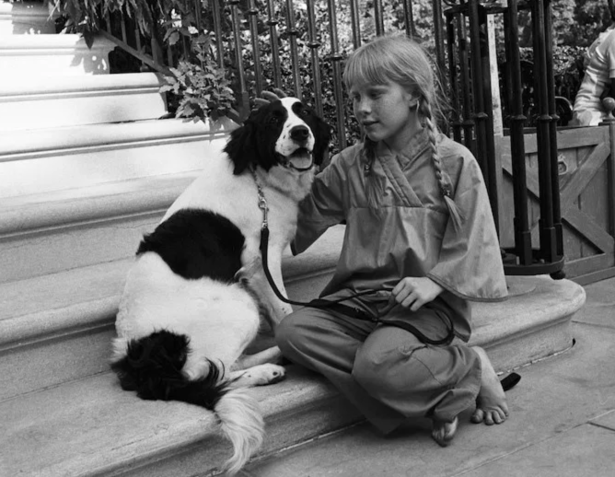 Jimmy Carter didn’t enter the White House with a pet in tow but his daughter Amy needed a friend. Enter Grits, a border collie mix born the day Carter won his election. The brown and white collie was one of the most well-liked dogs in Washington D.C. 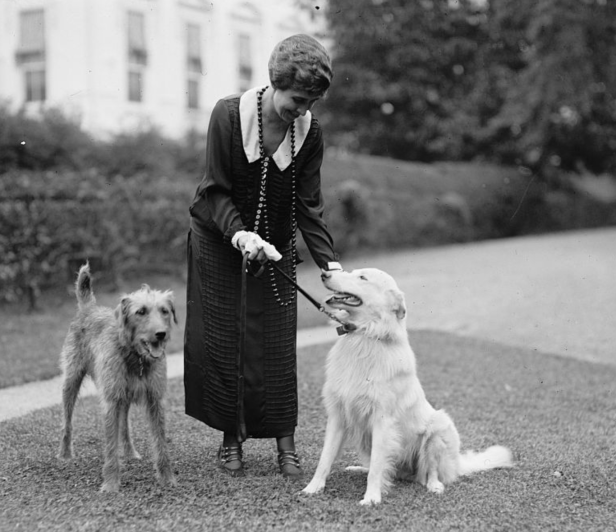 So Rob Roy, a white collie, wasn’t actually in the circus. But Coolidge’s wife, First Lady Grace Coolidge, became enamoured with the breed after seeing other collies perform in the circus. Naturally, she just had to have one join them in the White House. 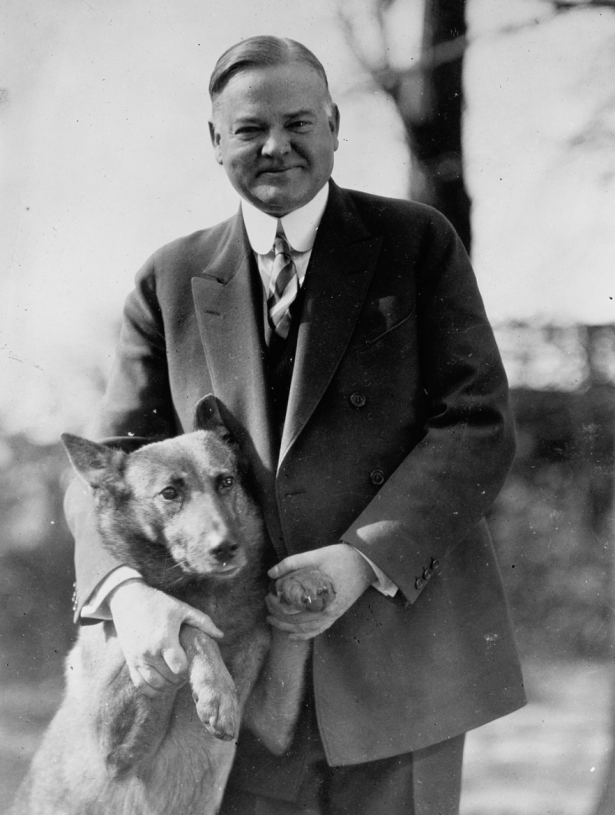 Hoover had a Belgian Shepherd, among many other dogs, by the name of King Tut. The breed looks like a German Shepherd (which Hoover also owned) but is more commonly known as a Malinois.

This story was updated from an earlier version published August 26, 2016.

RELATED: Meet the Dog Who isn?t Too Fond of President Obama