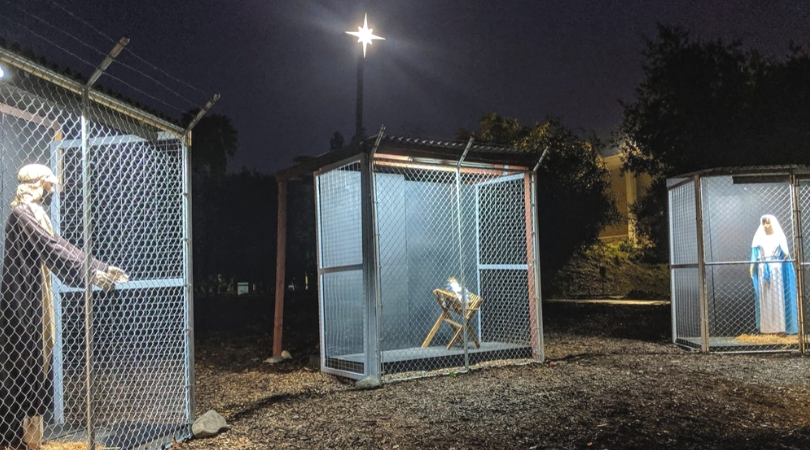 A Southern California Church decided to go the extra mile to help migrants who have faced harsh conditions while seeking asylum in the United States. The church displays the traditional Nativity scene which depicts Jesus, Mary, and Joseph as refugees locked inside a cage to draw attention Nationwide.

The Claremont United Methodist Church which is 30 minutes east of Los Angeles, posted a photo on its website which shows the 3 held in separate cages topped with barbed wire. The baby Jesus is wrapped in a silver foil blanket.

According to Rev. Karen Clark Ristine, the inspiration behind the annual Nativity scene came as they were thinking about the most famous Refugee family in the world, which is the family of Jesus. In a Facebook post, the lead pastor says the display came from the idea of “what if this family sought refuge in our country today?”

Ristine noted that the bible’s story of Mary and Joseph fleeing from Israel to Egypt to “escape King Herod’s decree that all baby boys be killed is symbolic of the plight of several thousands of refugees who are seeking asylum in America. ”

“In the Claremont United Methodist Church nativity scene this Christmas, the Holy Family takes the place of the thousands of nameless families separated at our borders. Imagine Joseph and Mary separated at the border and Jesus no older than two taken from his mother and placed behind the fences of a Border Patrol detention center as more than 5,500 children have been the past three years.”

The lead Pastor hopes this Nativity can spark enough conversation to make a change for how these migrants are treated. Safe to save Facebook users were sharply divided, saying it was disrespectful. While other social media users thought it was a very powerful display that can change someone’s way of thinking.

Thousands of children, many who came from Central America, were separated from their families at the United States Southern border after the Trump Administration began to criminally prosecute any adult who entered the United States illegally.

If Joseph and Mary reached our border today, they would be separated from their baby and locked up. I'm proud of Claremont United Methodist Church – which is in my district – for highlighting the plight of today's refugees w/ this powerful nativity scene. https://t.co/NGbwLF1XGy

After a lawsuit was filed by the American Civil Liberties Union, immigration authorities stated that roughly 5,400 children have been separated from their families beginning in July 2017. The administration did end the practice last year, but watchdogs have said it has continued at a slower pace “sometimes under dubious circumstances.”

At the beginning of 2019, the Administration launched a new effort which was aimed at keeping asylum-seekers in Mexico while they awaited court proceedings here in the United States. Last week, Human Rights First, which is a nonprofit group, stated it had documented 636 reports of kidnapping, rape, torture, and other violent crimes against migrants who returned to Mexico under this program.

Art emulates the realities of a society. The good, bad and ugly. #RefugeesWelcome https://t.co/h7W8TXv7sn

My church. I've never been prouder.

#GiveMeABreak
Nativity Scene Outside #Claremont #CA #Church Depicts Jesus, Mary and Joseph as Refugees Separated in Cageshttps://t.co/6zGQtFy8QQ
God (in the Bible) tells us to obey the laws and authorities.
He wants people to honor our nation by honoring our borders and laws.

kudos to #claremont #unitedmethodist #methodist #church for having the courage to stand up when the world is in such need of such courage. #immigrants are people. #trump #republicans #GOP #foxnews love family separation. They own it it is there thing https://t.co/5weRqbxAYv