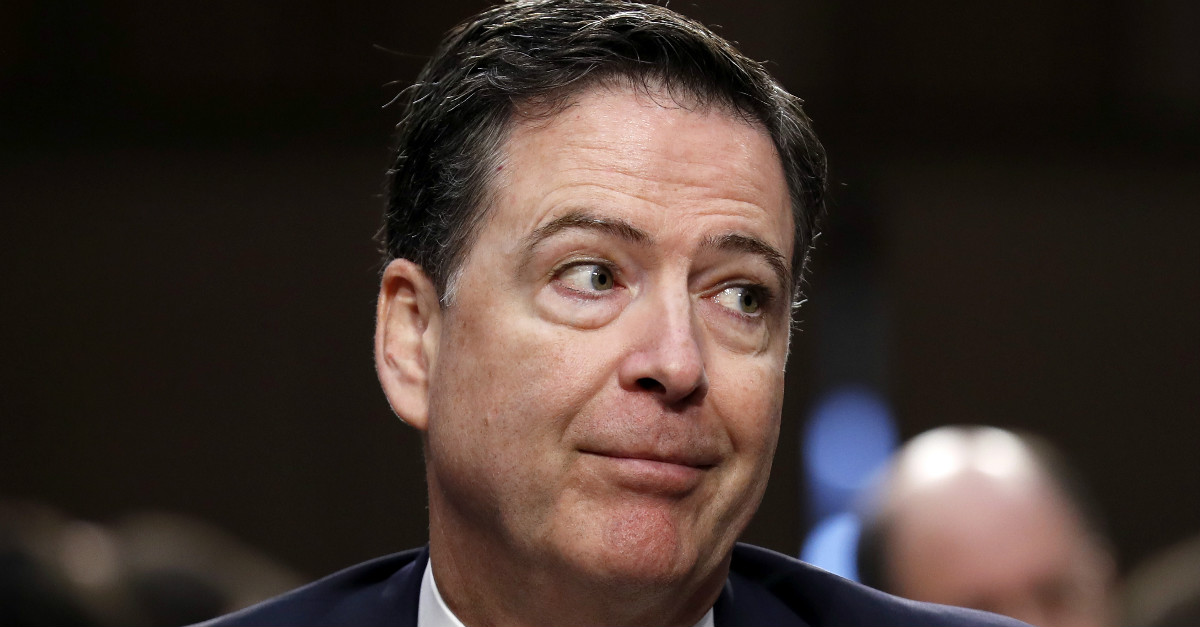 With his two and a half hour testimony in front of the Senate Intelligence Committee today, former FBI Director James Comey has catapulted himself into an elite group of congressional witnesses (think John Dean, Oliver North and Ken Starr) who captured the rapt attention of the entire country. It seemed like the whole nation was watching; the bars in Washington were packed with people in suits, drinking beer and watching the testimony. In Washington at least, nothing else going on around the world was relevant compared to what was happening in that hearing room.

Pundits will pick apart all of Comey’s nearly three-hour appearance, newscasters will repeatedly compare Comey’s testimony with John Dean’s historic 1973 takedown of the Nixon White House, and Trump’s defenders will look like clones in their effort to slam Comey’s character. And Comey’s allegation that the White House was lying to the American people about their reasons for firing him will give the president’s doubters more blunt instruments to hit the president over the head. Comey’s recollection of events was damning and incredibly detailed, supported by the kind of contemporaneous notes that only a diligent investigator would take.

But underneath all of the salacious details about Comey staring at Trump stone-faced after the personal loyalty request, Attorney General Jeff Sessions hovering by the grandfather clock in the Oval Office, and Comey’s authorizing his friend to leak the content of his memos to the media, is a fundamental point that will cause the administration’s legal team to sweat: Comey all but said that Trump was attempting to obstruct justice by prodding the FBI to drop the investigation into Michael Flynn.

When pressed by senators on this point, Comey was cautious. He refused to say categorically that the president broke the law, preferring instead to leave that interpretation up to Special Counsel Robert Mueller and his team of investigators. As a law enforcement man, that was a smart move; just as he tried to protect the FBI investigation into Russia’s election interference from being influenced or tainted by any of Trump’s requests, he didn’t want his own words to impact Mueller’s probe.

But let’s be frank: Comey may not have used the term “obstruction of justice,” but his interpretation of what President Trump was asking for during that February Oval Office meeting lies within the definition. According to Comey, after Trump encouraged Comey to back down on Flynn, he “took it as a direction” – not an explicit written order, but a strong suggestion that the president didn’t want the Flynn matter to go any further. “This is the president of the United States with me alone saying ‘I hope this,'” Comey testified. “I took it as, ‘This is what he wants me to do.’  I didn’t obey that, but that’s the way I took it.”

I’m no legal scholar or lawyer, but this sounds to the layman like a pretty good example of how obstruction of justice is defined in the U.S. criminal code. Read the federal definition of this crime, and you may come to a similar conclusion.

RELATED: Comey says he was ?stunned? by his Oval Office conversation with President Trump: ?I hope there are tapes?

What comes after the Comey hype is difficult to predict. Mueller will continue to turn over rocks and do his work in the months to come, as will several committees on Capitol Hill that are conducting their own lines of inquiry. If the White House thinks it’s out of the woods and that the toughest phase of the Russia story is over, they have another thing coming. Special counsels are notorious for aggressive behavior, especially if the people or entity being investigated is the president’s closest aides – and maybe even the president himself. Bob Mueller’s authority is extensive; if he discovers anything in the course of his inquiry, his remit allows him to pursue it. We could potentially be looking at years of investigators prowling around Washington, fishing in every pond, hoping to catch the kind of big fish that would put Trump in serious political jeopardy.

Comey’s testimony this morning will only provide the special counsel with more of an incentive to get to the truth of who did what in the Trump campaign and White House, and when they did it.