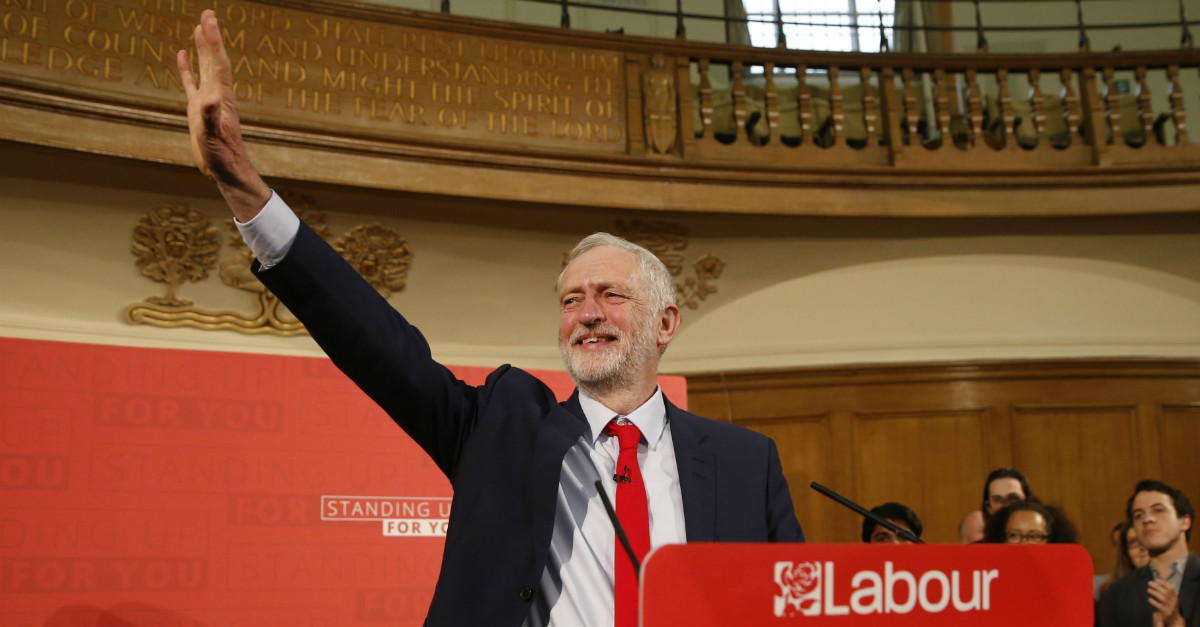 AP Photo/Alastair Grant
Britain's Leader of the Opposition, and leader of the Labour Party Jeremy Corbyn waves to the crowd at a political rally in central London, Thursday, April 20, 2017. Corbyn launched his election campaign, painting himself as a populist outsider who will overturn a "rigged" political and economic system ahead of a general election on June 8. (AP Photo/Alastair Grant)

There was a time in the not-so-distant past when Britain’s Labour Party, led by bearded lefty Jeremy Corbyn, was staring into a bleak abyss. When Conservative Prime Minister Theresa May surprised the British electorate by calling a snap election this spring, it was widely seen as a shrewd political move. All the political prognosticators assumed the Tories would wipe the floor with Corbyn and perhaps even hand Labour its weakest numbers in the House of Commons since the days of Margaret Thatcher. One Tory MP likened the June 8 election to a massacre: “It?s going to be a bloodbath and Labour know it.”

What a difference a month makes.

The Tories consistent double-digit lead in the polls has gone down exponentially ever since Theresa May botched the rollout of her party’s manifesto. What was once a 20-point advantage, fueling predictions of a Conservative landslide and a massive parliamentary majority, has now been whittled down to three points in some polls.

RELATED: As she plunges in the polls, Britain?s prime minister shows she?s no Margaret Thatcher

The numbers have gotten so troubling that there are murmurs within the Conservative Party that May could be under serious pressure if Labour manages to exceed expectations. Corbyn’s party may actually gain seats this month, something that would shock pretty much everyone in the UK and land May in the same position that Corbyn was in last summer: fighting for survival and legitimacy as leader against her peers.

What accounts for this shift in popular opinion? I’m no expert in British politics, so I’m going with the obvious: the more time voters spend with May, the more they see her as a scripted, privileged politico who’s afraid of confronting her opponents in the national spotlight. Contrast that with Corbyn, who has miraculously turned into a likable figure with his constant presence on the stump, his group hugs, and his selfies with dogs. Next to him, May looks like just another stuffy Brit.

RELATED: Marine Le Pen is now the voice of the opposition in France

Some of May’s campaign decisions are so laughable that it’s hard to believe she actually signed off on them. How on earth did she think skipping last week’s BBC party leaders debate would come off well? The optics were terrible: literally every major party in Britain was represented on the dais by their leader?with exception of the Tories. They had to ask Home Secretary Amber Rudd to fill in. The running joke of the night was pointing out May’s absence and wondering where she’d gone. Maybe she was hiding behind the curtains?

Could Jeremy Corbyn really become the next British prime minister? If that happens, an earthquake will be felt across Europe, one that may be just as powerful as the seismic activity felt after Brexit. The smart money remains on May to remain prime minister on June 8. But if she enters parliament with even a diminished majority, she will be castigated as the loser.