Could this lawsuit finally get third parties into the 2020 presidential debates? 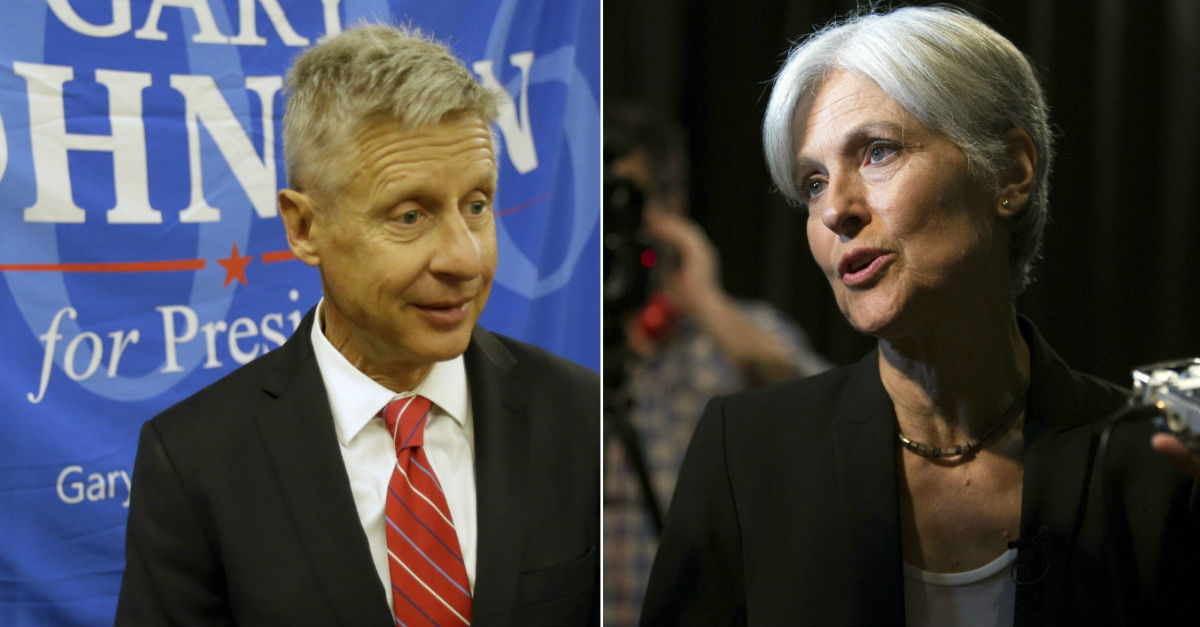 I know, I know: It’s way, way, way too early to be thinking about the 2020 election. Still, a case presently underway at the U.S. District Court in Washington, D.C., may just have a huge influence on the shape of our presidential election next time around and for years to come.

Of course, this is hardly the first time third parties have attempted to litigate their way onto the presidential debate stage.

This past August, for instance, a judge dismissed a lawsuit from Libertarian Party candidate Gary Johnson and the Green Party’s Jill Stein which argued that the Commission on Presidential Debates (CPD) is violating the First Amendment and anti-monopoly laws by making it practically impossible for non-major party contenders to participate in the general debates.

Both of those candidates were ultimately excluded from the debates between President-elect Donald Trump and Hillary Clinton, a move polling showed most Americans believe was a mistake.

Before that, back in 2000, both Pat Buchanan (the Reform Party candidate) and Ralph Nader (the Green Party nominee) filed similar complaints. Buchanan, who was considered by some to have the stronger case, complained to the Federal Election Commission (FEC) “that the CPD acts on behalf of the major parties and that its 15 percent standard is self-serving,” as The Nation reported at the time, while Nader’s case rested on allegations of illegal corporate funding.

Like the Johnson-Stein suit, both efforts failed to get third party candidates into the debates.

The current case takes a different approach. Filed by the Libertarian and Green Parties plus a nonpartisan nonprofit called Level the Playing Field, this suit argues that the CPD is violating FEC donation rules because it is bipartisan when it is legally required to be nonpartisan.

Here’s an excerpt from the oral arguments of attorney Alexandra Shapiro, the lawyer representing the third party coalition that is suing (emphasis added):

The CPD was founded for the express purpose of promoting the two major party candidates. And the founders made express public statements about keeping third parties out. And it was founded to wrest control from an obviously nonpartisan organization, the League of Women Voters. Its founders were the then chairman respectively of the Republican and National and Democrat National Committees.

And throughout — from that time, through the 2016 election, the CPD has continued to be led by extremely partisan chairmen. And it has also had other similarly partisan board members. And these people have made numerous statements over the years confirming their bias, including several recent statements.

But most importantly for purposes of this case we demonstrated that, including very recently many of the board members have contributed heavily to the two major parties and their candidates. They have raised funds for them. The two chairmen are lobbyists who have been funneling money to Democratic and Republican politicians for years.

Shapiro also argued that the CPD’s requirement for debate participation — that candidates demonstrate at least 15 percent national support in polls of the Commission’s own choosing — is illegitimate because it does not amount to “pre-established objective criteria” that can be reasonably applied to independent and third party contenders.

Now, what’s promising about this case as opposed to ones in the past is that Judge Tanya S. Chutkan, who is presiding, made clear she is not satisfied with the FEC’s arguments to date. (The FEC, not the CPD, is this lawsuit’s direct target.) In the oral arguments, Chutkan criticized the FEC’s defense for amounting to “saying we get to do what we get to do because we’ve always gotten to do it.”

“What I’ve seen in the [FEC’s] analysis is basically a conclusion that says, [third parties] don’t like the way we do things, but we can do things the way we do things,” she added. “And I don’t mean to be flip here, but I am surprised at the decision of the FEC to basically ignore a lot of substantive evidence and substantive allegations against more than two people that plaintiffs have brought here.”

I’m not surprised — but I am glad to see that evidence has made it to a judge who is giving this case a fair hearing. It’s too soon to think about 2020, but if this lawsuit succeeds, even I might be getting excited for the next election.