Does Trump realize that Corker holds all the leverage? 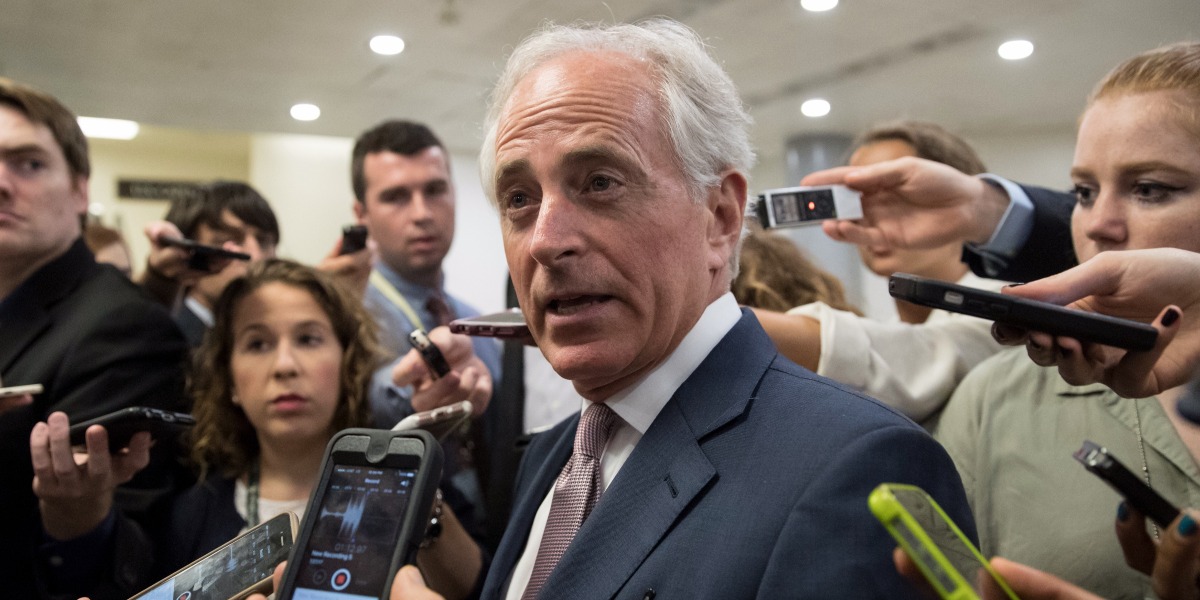 AP Photo/J. Scott Applewhite, File
FILE - In this July 27, 2017, Senate Foreign Relations Committee Chairman Sen. Bob Corker, R-Tenn. is surrounded by reporters on Capitol Hill in Washington. Corker, the chairman of the Foreign Relations committee and a foreign policy ally of the Trump White House, delivered the sharpest criticism of Trump, declaring that the president “has not yet been able to demonstrate the stability nor some of the competence that he needs to" in dealing with crises. (AP Photo/J. Scott Applewhite, File)

Three weeks after Donald Trump shocked with his upset victory over Hillary Clinton, a short Tennessean with a southern drawl flew up to the big city to meet with the president-elect in Trump Tower. Sen. Bob Corker, chairman of the powerful Foreign Relations Committee, was rumored to be in the running for Trump’s secretary of state. It was an important position that would be even more important in the new regime, given Trump’s foreign policy inexperience and his habit of making allies nervous during the campaign. Before that, Corker was considered a possible vice-presidential candidate, a more reserved and in-the-weeds yin to Trump’s publicity-seeking, Make-America-Great-Again yang.

RELATED: Trump throws Republican Senator under the bus and the response set the internet ablaze

Corker obviously chose to stay in the Senate, either because Trump declined to offer him the secretary of state portfolio — as the president claimed on Twitter yesterday — or because the junior senator from Tennessee recognized early on that to be a part of Trump’s team would elicit hair loss and high blood pressure. Corker clearly made the right decision, wagering that he would be much more influential in Washington continuing in his role as chairman of a major committee than being a cabinet member who is consistently undermined by his boss (just ask Rex Tillerson).

This is why Trump’s sudden tirade against Corker this weekend is so misguided. The president may not care about the prerogatives and unity of the Republican Party all that much, but he should care about his own legislative agenda — tougher immigration laws, the repeal and replacement of Obamacare, tax cuts, infrastructure investment, a realist foreign policy and staffing his State Department with the best diplomatic minds the country has to offer. Since the Democrats won’t be helping Trump out anytime soon, he needs cooperation from congressional Republicans if he hopes to see that agenda enacted.

If Republicans had a six- or seven-seat majority in the Senate, Trump could afford to pick a fight or two with a legislator. It’s not like presidents haven’t leaned on, pressured, sweet-talked or threatened lawmakers in their own party in the past to push their priorities through. But when administrations decide to get tough, they generally have room to make a mistake; LBJ badgered southern Democrats during debate over civil rights legislation in 1965, but he had a massive congressional majority to fall back on (that year, Democrats held a 68-32 majority in the Senate and a 295-140 majority in the House) and a contingent of moderate Republicans willing to work with him. Early in his first term, Barack Obama was fortunate enough to have solid Democratic majorities in both houses to pass things like financial reform, ambassadorships, and Supreme Court nominations. At one point, Obama had enough Democratic and Democratic-caucusing independent senators to get health care reform through without a single Republican vote.

President Trump doesn’t have those numbers. He can barely muster 51 votes to begin a debate about repealing and replacing Obamacare. Some Senate Republicans, like John McCain, Rand Paul, Jeff Flake, Susan Collins and Lisa Murkowski are willing to break with Trump depending on the issue, so a 4-seat GOP Senate majority for Trump is a little misleading. From a purely mathematical perspective, it makes no sense whatsoever for Trump to make Corker into an enemy.

Corker may be a lame-duck retiring next year, but he’s a powerful lame duck who can make things complicated for the administration. As chairman, he can single-handedly block consideration of State Department nominations and shepherd bills through the committee that the White House may not want on the floor like more mandatory sanctions on Russia. This isn’t a guy you want to mess with.

Whether Trump wants to accept it or not, Corker holds all the power. Trump needs to tread carefully, and perhaps Chief of Staff John Kelly should sit the president down to explain just how pointless this fight is.