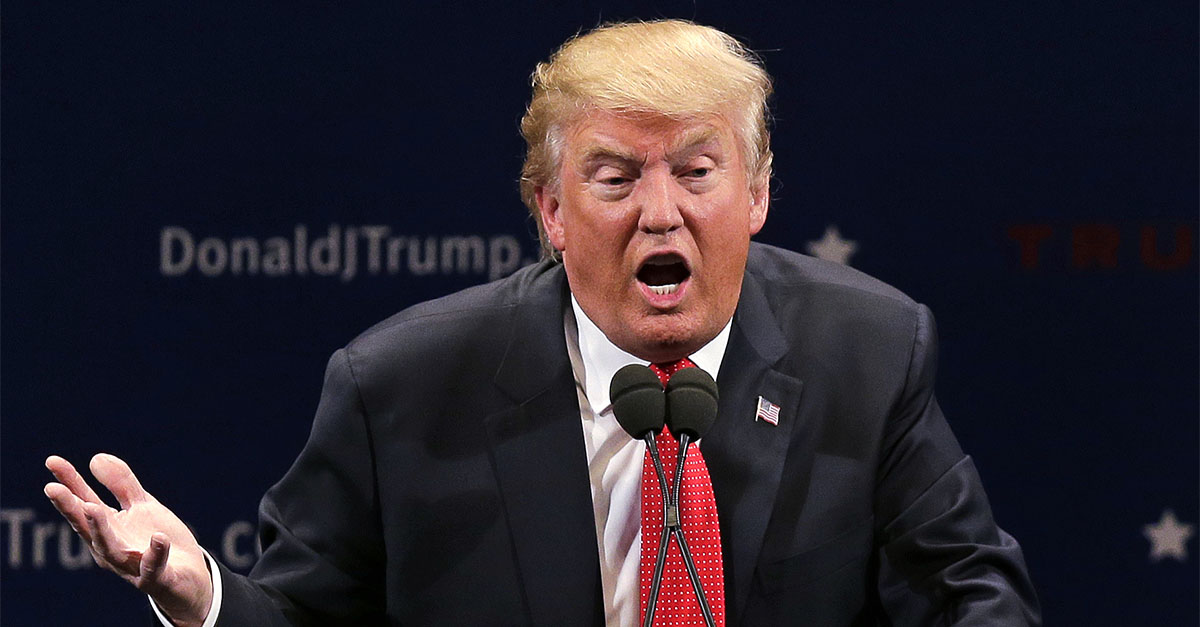 Donald Trump is all about torture?and no, I don’t mean the torture of his continued presidential campaign.

?Would I approve waterboarding? You bet your ass I would,” he said in November. “In a heartbeat. I would approve more than that. It works…and if it doesn?t work, they deserve it anyway for what they do to us.”

Since then, Trump being Trump, he has escalated this kind of rhetoric, saying in the recent New Hampshire debate that he would also do “a hell of a lot worse than waterboarding.” What exactly that might look like isn’t clear, but given Trump’s confirmation that he believes America should be more like ISIS in this regard (yes, ISIS with the beheadings and the crucifixions and the burning people alive), it presumably wouldn’t be pretty.

Even though waterboarding (and whatever “a hell of a lot worse” means) is definitely illegal under U.S. law and the Geneva Conventions, Trump doesn’t care. “It works, OK?” he insists. “It works. Only a stupid person would say it doesn’t work.”

(Other 2016 candidates, including Jeb Bush, Ben Carson, Ted Cruz, and Marco Rubio have expressed varying degrees of support for waterboarding and/or other torture techniques, though none have matched Trump’s enthusiasm.)

John Rizzo, who was a top CIA lawyer during the time the agency used ?enhanced interrogation techniques,? or EITs, on prisoners, predicts CIA officials would rather resign than obey orders to revert to ?hard measures? like waterboarding and beatings.

?I think certainly many of those who were connected to the EIT program over its six years? span?and hundreds are still there?would? resign or retire rather than have to go down that perilous road again,? Rizzo tells Newsweek. ?Who could blame them?? […]

After revelations surfaced a decade ago that the CIA was using such rough techniques on prisoners in secret sites around the world, the agency was embroiled in a years-long global uproar and a controversial Senate Intelligence Committee investigation.

It was such an ordeal for the CIA that one of its former chiefs, General Michael Hayden, declared recently that the agency would never do it again. Likewise, the nation?s current top spy official, Director of National Intelligence James Clapper, said this week that the CIA should stick with the stricter Army Field Manual on interrogations, because it ?comports with American values.?

?If some future president is going to decide to waterboard, he?d better bring his own bucket, because he?s going to have to do it himself,? Hayden said last November in an ABC TV documentary, The Spymasters.

It is telling, perhaps, that the CIA has developed such a conscience about torture only after the release of the Senate’s damning torture report. But inconsistency aside, the CIA is right, and Donald Trump is wrong.

American should not torture, and torture does not work.

This is the case for a number of reasons: It undermines effective, nonviolent interrogation skills. It has agents chasing unreliable leads based on bad information, wasting valuable time. Intense pain can damage torture subjects? memory, meaning they legitimately forget the intelligence their torturers are trying to acquire or lose the ability to distinguish between true and false memories.

As one researcher, Darius Rejali, concluded in what is considered to be ?the benchmark work on torture,? “For harvesting information, torture is the clumsiest method available to organizations, even clumsier in some cases than flipping coins or shooting randomly into crowds.”

The sources of error are systematic and ineradicable,” Rejali concluded.

Well before Trump staked out his position, the CIA even admitted that its waterboarding and other truly gruesome torture techniques never successfully stopped any imminent terrorist attacks.

The agency was successful in torturing at least 26 innocent people?even after realizing they were innocent?including  a mentally challenged man who was brutalized so that his cries of pain could be taped and played to his family to coerce confessions.

It was also successful at endangering American soldiers, because news that the United States tortures innocents radicalizes people who otherwise might never have become terrorists.

?I learned in Iraq that the No. 1 reason foreign fighters flocked there to fight were the abuses carried out at Abu Ghraib and Guantanamo,? writes Iraq veteran Matthew Alexander. ?Our policy of torture was directly and swiftly recruiting fighters for al-Qaeda in Iraq.?

Oh, and al-Qaeda in Iraq? Yeah, that?s the group which spawned ISIS. Use of torture, in other words, is a key way American intervention in the Middle East led to the rise of the scariest terror group around today.

In the fact of such evidence, “only a stupid person would say” that torture works.