Donald Trump’s loss in winner-take-all Ohio keeps alive the possibility of a contested GOP convention that denies Trump the nomination.

Last August, I pointed out that Trump could still run for president as an independent even if he lost the Republican nomination because the filing deadline for independents in every state is much later than for those who run in the primaries.

Trump has been winning most of the primaries. If he goes to the Republican National Convention in Cleveland with the 1,237-vote majority, he will almost surely get the Republican nomination.

But if Trump only has a plurality of votes, we could see a contested convention that could give the nomination to someone else.

Richard Winger of Ballot Access News tells me that most of the states’ filing deadlines for independent candidates are after this year’s conventions.

According to his list of dates, four states (Illinois, Indiana, New Mexico, and North Carolina) are in June, and one, Texas, is in May. The rest are in July, August, or September. Of the six in July, four are on July 15, right before the convention. Georgia’s is July 12 and Nevada’s is July 8.

Those in July are late enough that Trump will know whether he is heading to the convention with a clear majority of delegates or only a plurality, and as a result possibly lose the nomination at the convention.

If the latter, he might choose to begin the process by registering in those early states before the convention, just in case.

And he wouldn’t necessarily have to register to be on the ballot in all 50 states. Winger tells me there are 12 centrist one-state parties—that is, political parties that only exist in one state—that usually have a slot on their state’s ballot for a presidential candidate. If Trump is denied the GOP nomination, some of those one-state parties might offer to make him their candidate, thus putting him on the ballot in those states.

Then there are the remnants of Ross Perot’s old Reform Party, which is already registered to be on the ballot in some states and could be energized to meet state qualifications in many more should Trump sign on. Winger says that Reform Partiers love Donald Trump, which is easy to believe.

That’s not to say an independent run would be easy—just doable. Trump has the money and supporters to make it possible.

Would Trump try an independent run if the convention deprives him of the nomination?

I argued last August that he probably wouldn’t, but that was in the event that he lost the nomination because Republicans preferred other candidates. Clearly, many Republican voters want him, and in a December poll, 68 percent of his supporters said they would vote for him if he ran as an independent.

And so he just might take a shot at an indy run, thus giving us our first woman president. 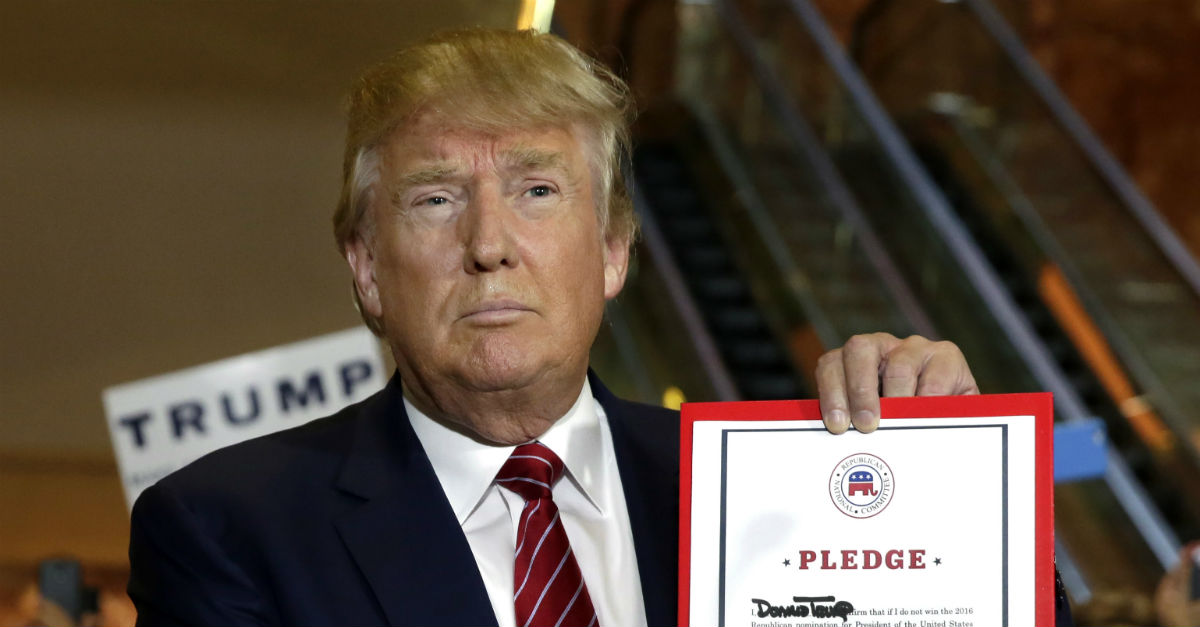