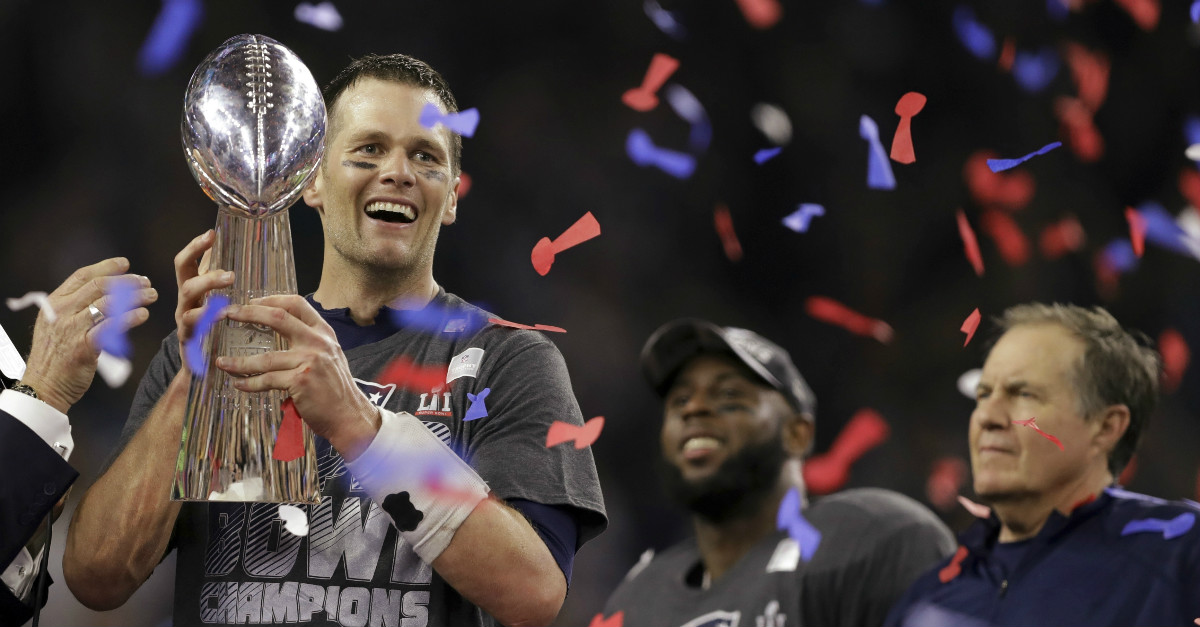 Rumors have swirled all season that Tom Brady is a fan of Donald Trump. The incriminating evidence is thin: a single “Make America Great Again” hat photographed inside his locker. Brady has sounded apolitical in every profile I’ve ever read of him and his subsequent explanation that he innocently accepted the hat because Trump is his friend seems solid enough. Yet a million insipid think pieces bloomed, calling on Brady to disown the new president.

He doesn’t need to. Nor is he in any way like Trump (it’s hard to think of a sharper contrast than between the boisterous Trump and the earnest Brady), nor are the underdog Atlanta Falcons somehow akin to elite’s elite Hillary Clinton, nor is there a single parallel between last night’s Super Bowl and last year’s election. Your meme is wrong. One of the many glorious things about football is that it is a reprieve from politics, and those who try to superimpose their ideologies on it should be ostracized from polite society and exiled to the Yukon.

Last night was an exhibition of raw talent, mostly devoid of political flash points. Brady impossibly led the New England Patriots out of a 25-point gully to defeat the Falcons in overtime. Julian Edelman somehow pulled in a thread-the-needle ball that should have either touched the ground or been intercepted by one of three Falcons receivers. Matt Ryan’s first two-and-a-half quarters appeared as sorcery with so few snaps in the first half that even Ryan himself seemed amazed after the game. Julio Jones made a catch that only Julio Jones could have made. Lady Gaga gave an electrifying halftime performance?no lip-synching needed, never with her?in which the Michael-Moore-at-the-Oscars moment so many were dreading never materialized.

If this feels like trite, Jon Gruden-style, “this guy!” sportswriting, that’s because it is and I don’t care. Last night was a spectacle worth gushing over. There’s a reason ESPN has already ranked it the number-one Super Bowl in NFL history.

RELATED: Lady Gaga starts her halftime show with a beautiful tribute to America before really turning up the heat

Ruling out the dead-ended anti-Patriots cretins who still think Tom Brady ordered footballs to be surreptitiously deflated in a men’s room despite 21 scientists at 10 universities saying it was a little something called the “ideal gas law,” pretty much everyone now acknowledges that Number 12 is the best quarterback of all time. I’d imagine that would include Donald Trump, who’s expressed support for the Patriots in the past and fired off a tweet last night calling Brady and company “total winners.” But Trump is a fair-weather fan at best. Before their comeback, when the Patriots were getting creamed 28-3, the president gave up on them, leaving a Super Bowl party in Florida to retire for the night.

We Patriots fans have enjoyed their success, but there have also been plenty of low moments, staying in on Halloween in 2004 only to see the Pats disintegrate before the Steelers, wanting to turn our jerseys inside-out when that historic 19-0 streak cooled a little too early. We watched anyway, to the bloody end, because true fans endure the hardship as well as relishing the euphoria, which is why Orchard Park hosts one of the liveliest stadiums in sports despite the recent record of the team that plays there. For all of sports’ hypocrisies and artificialities, they still provides us with a sense of proud identity, colors to wear, players we feel we know, dramas in which we feel included. That’s what it means to be a fan.

Donald Trump, as was established long ago, is a fan only of the rush provided by winning, and tends to degenerate into a simpering crybaby when he hits those inevitable nadirs?which is why he bailed on the Pats early and which also gives me an idea. Instead of subjecting ourselves to another demagoguery-saturated campaign, what if we settled the next presidential election with a football game? Hillary Clinton is already accustomed to dodging Bosnian sniper fire, so her athletic abilities wouldn’t be in question if she chooses to run again. Why not? Politics has become a spectator sport anyway, albeit with lower talents on display. Let’s validate the memes and merge the two. My prediction: Trump wouldn’t last five minutes.