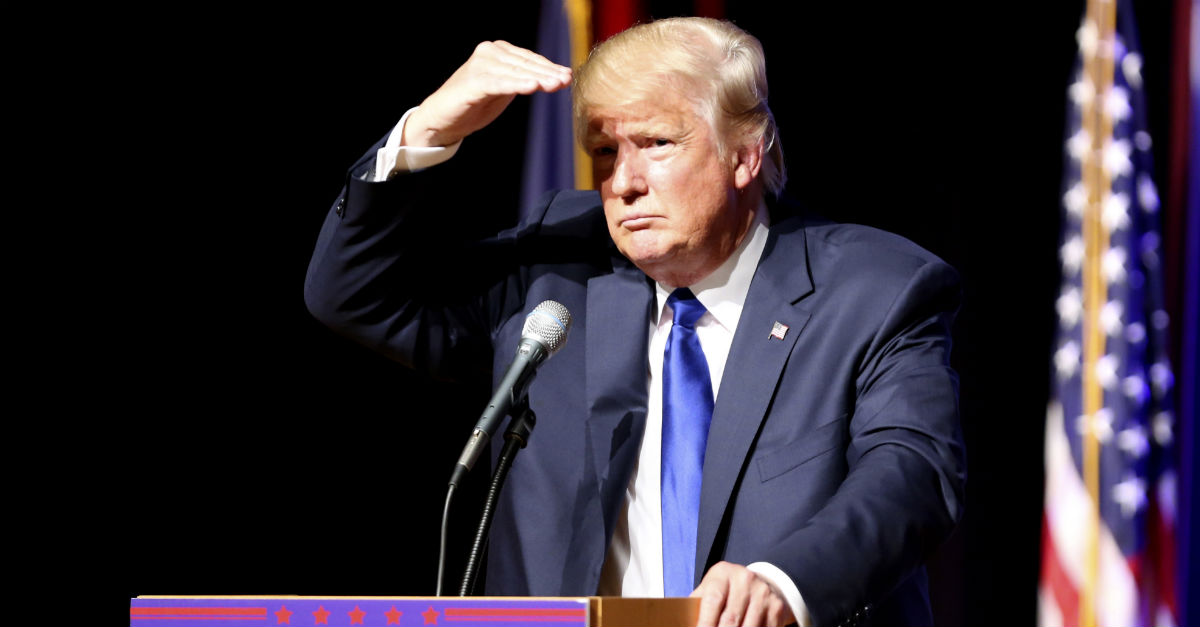 Only it didn’t quite go as planned. His citation of “Two Corinthians”?a book American Christians typically call “Second Corinthians”?drew laughter from the college audience and widespread derision in subsequent news reports.

To be fair, there’s some evidence this wasn’t actually a screw-up. In the UK, it’s common to speak about biblical books this way, and Trump’s mother was a Scottish immigrant (!) who may have introduced that turn of phrase to her son. But regardless of whether Trump botched the Bible, there are bigger questions here.

Is this really Trump’s biggest problem with Christianity?

Is this really the point where American Christians are beginning to have concerns over whether Trump shares our faith?

Is this really what tipped people off that maybe he’s faking it?

I’ve said before and I’ll say again: I do not advocate supporting or opposing a candidate based on their statements about their faith. Too often this leads to a dangerous confusion of church and politics, as well as disingenuous displays of religiosity from politicians. I’m pleased that the old GOP formula to snag the evangelical vote seems to be unraveling.

Furthermore, none of us can know Trump?s heart?but it?s also true that we?re supposed to be able to identify fellow Christians by their love and fruits of the Spirit.

On that point, here’s an incomplete list of things Trump has said about Christianity that are way worse than “Two Corinthians.”

Well I say God is the ultimate. You know you look at this? Here we are on the Pacific Ocean. How did I ever own this? I bought it fifteen years ago. I made one of the great deals they say ever. I have no more mortgage on it as I will certify and represent to you. And I was able to buy this and make a great deal. That?s what I want to do for the country. Make great deals. We have to, we have to bring it back, but God is the ultimate. I mean God created this and here?s the Pacific Ocean right behind us. So nobody, no thing, no there?s nothing like God.

2. On whether he has ever asked God for forgiveness: “I?m not sure I have. I just go and try and do a better job from there. I don?t think so. I think I if I do something wrong I think I just try and make it right. I don?t bring God into that picture. I don?t.”

3. On asking God for forgiveness after people didn’t like his first answer: “Well, I do. I think it?s great.”

4. On his beliefs: “I believe in God. I am Christian. I think The Bible is certainly, it is THE book. It is the thing.”

5. On taking communion: “Now when I take, you know, when we go to church and when I drink my little wine?which is about the only wine I drink?and have my little cracker I guess that?s a form of asking for forgiveness. I do that as often as possible because I feel cleansed, okay.”

9. On why he likes the Bible: “I don’t like to use this analogy, but like a great movie, a great, incredible movie. You’ll see it once, it will be good. You’ll see it again. You can see it 20 times and every time you’ll appreciate it more. The Bible is the most special thing.”

10. On his favorite nonexistent Bible verse: “Proverbs, the chapter ‘never bend to envy.’ I’ve had that thing all of my life where people are bending to envy.”

(Something he doesn’t deem too personal to share, by the way, is his thought that maybe he’d be dating his daughter if they weren’t related because she has “the best body.”)

12. On preferring the Old vs. New Testaments: “Probably equal.”

13. On his attendance of the NYC church that says Trump is not an active member: “A lot.”

14. On how “a lot” means Christmas and Easter and “the Sundays”: “Well, I go as much as I can. Always on Christmas. Always on Easter. Always when there’s a major occasion. And during the Sundays. I’m a Sunday church person. I’ll go when I can.”

Then there are Trump’s actions and character, which by now are familiar to most. In the words of the New York Times’ Frank Bruni:

Let me get this straight. If I want the admiration and blessings of the most flamboyant, judgmental Christians in America, I should marry three times, do a queasy-making amount of sexual boasting, verbally degrade women, talk trash about pretty much everyone else while I?m at it, encourage gamblers to hemorrhage their savings in casinos bearing my name and crow incessantly about how much money I?ve amassed? […]

[Trump] just about runs the table on the seven deadly sins. He personifies greed, embodies pride, radiates lust. Wrath is covered by his anti-immigrant, anti-?losers? rants, and if we interpret gluttony to include big buildings and not just Big Macs, he?s a glutton through and through. That leaves envy and sloth. I?m betting that he harbors plenty of the former, though I?ll concede that he exhibits none of the latter.

All that to say: vote for Trump if you want to vote for Trump. Vote for him if you legitimately believe what he’s passing off as a policy agenda is good for America.

But don’t vote for him because you’ve bought his transparent, pandering shtick that he’s a good Christian.

Trump is trying on the Christian faith the way other politicians try on a hard hat when they visit a construction site for a photo op: it’s obviously not his own, and he looks dumb wearing it.