Fear mongering over the Republican tax plan is getting ridiculous 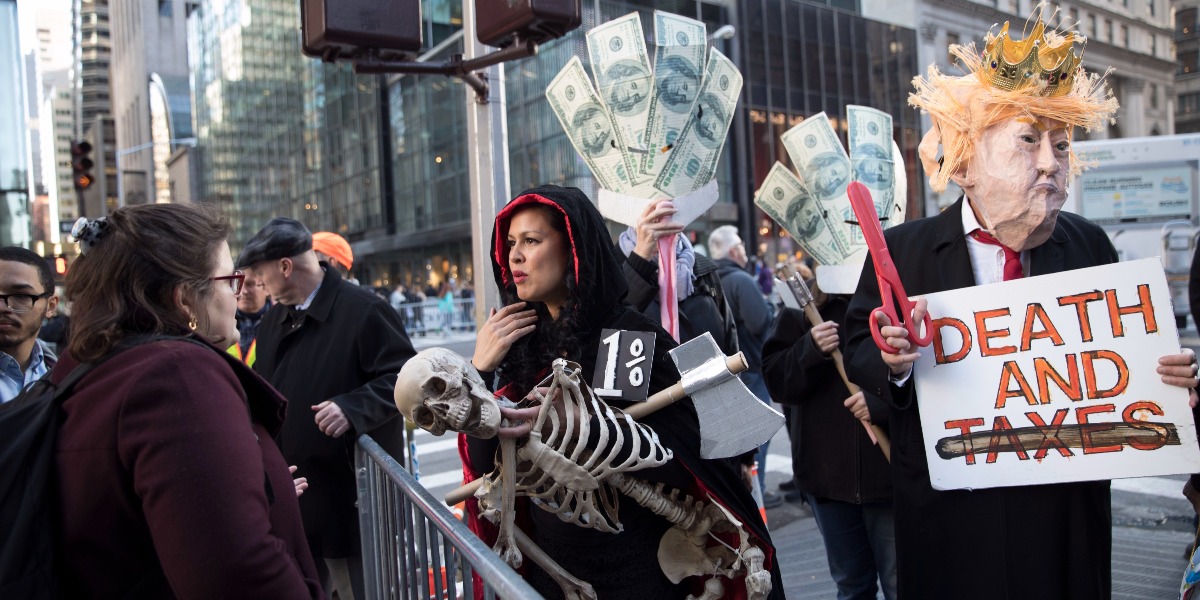 In 2013, Republican Congresswoman Michele Bachmann said on the House floor of Obamacare, “let’s repeal this failure before it literally kills women, kills children, kills senior citizens!” Republican Senator Lindsey Graham once said that a failure by the U.S. to go to war with Syria would result in Charleston, South Carolina being nuked. Donald Trump said last year, “Thousands of Americans have been killed by illegal immigrants.”

Bachmann was referring to health rationing or “death panels” some Obamacare opponents feared, which actually do exist under other government-run health care systems. Graham was worried about Syria’s chemical weapons. Trump is not wrong that illegal immigrants committing murder has happened.

But does framing debates over health care, foreign policy and immigration using extreme scenarios really help anyone? Does this kind of fear mongering actually represent what’s at stake?

Is it remotely accurate?

Does such hyperbole–PEOPLE WILL DIE!!!–do anything to advance productive discussion about public policy?

Right now, far too many are taking the same approach to Republicans’ tax reform plan. Exhibit A: Former economist Larry Summers said Monday that 10,000 people will die due to tax reform.

Economist Larry Summers predicts 10,000 will die per year due to tax reform https://t.co/OZ2rZGIH5A

He doesn’t. No one could possibly know this or make such a prediction. Summers is just spouting off numbers.

The former Bill Clinton and Barack Obama adviser believes that the repeal of the individual mandate—the federal government not forcing private citizens to purchase health care—means some people won’t have adequate care and might die sooner than they would have otherwise.

They will die at some point. All of us will eventually. Obamacare could have also actually established death panels.

But is either of these examples central to the primary arguments over tax and health care policy, or are they more accurately viewed as outrageous claims designed to distract?

It’s hand-wringing for its own sake.

Comedian Patton Oswalt seems to think that with the Republicans “#TaxBillScam,” America is over.

Is there any going back after this #TaxBillScam? To America? Does it matter now if Trump is impeached? There’s no America now. Not the one we knew. Sorry, feeling real despair this morning

“Is there any going back after this #TaxBillScam? To America?,” Oswald tweeted Saturday. “Does it matter now if Trump is impeached? There’s no America now. Not the one we knew. Sorry, feeling real despair this morning.”

I’m not sure which part of the tax plan has upset Oswalt, but what is a more likely scenario?: That the Republican tax plan (or Obamacare, or Syria, or illegal immigrants) will end America as we know it? Or that the country will still remain relatively unaltered as has happened pretty much every time someone left or right claims the other side’s policies will obliterate us all?

The truth is that the tax plan, like health care, foreign policy, and immigration, are more often complex in detail than most bumper sticker-sized texts and tweets will allow. For every story you read about how the GOP tax will hurt people, you can usually find a counterargument as to why it would help them. Either side could be right or wrong. Perhaps each is right in part and wrong in part. Determining what’s true and what’s false is the entire point of political debate.

But just constantly scaring people is not debate.

In June, libertarian comedian Remy made a hilarious video for Reason demonstrating how politicians love to frame passing new laws as life or death decisions.

The video begins with Democratic Senator Elizabeth Warren claiming that “people will die” due to a GOP House health care bill. Remy then mocks her statement, pretending to be various congressmen (with names like “Sen. Max Hyperbole” and “Sen. Guy Knowsbedder”) who push for mandatory organ donation legislation, new speed limit laws, mandatory helmet bills, alcohol prohibition, life in prison for any crime (since some murders are committed by repeat offenders), and even whipped cream bans.

Remy ends every mock proposal by saying anyone who opposes them simply wants “people to die!”

It’s comical, but on point. How often is our discourse legitimate political debate, and how often is it just a competition to see which side can out-fear monger the other?