In the past few years, we’ve seen some fairly unconventional families in the White House. The past two First Ladies are both stepmothers! But Melania Trump, in fact, was not the first stepmom in that role. So in honor of Mother’s Day, let’s look back at the history of presidential stepfamilies.

Julia Tyler was the second wife of John Tyler, the tenth president of the United States. (Tyler ascended to the office after William Henry Harrison died of pneumonia 32 days into his presidency.) His first wife, Letitia Tyler, died in 1842 making her the first First Lady to die during her tenure. Two years later, the 54-year-old Tyler remarried 24-year-old Julia Gardiner, making her the the stepmother to Tyler’s eight (!) children. As First Lady, she experienced just eight months of the title; Tyler’s was term ending. Following his presidency, the couple had seven more children together. With 15 kids, Tyler had a bigger family than any other president — it’s also quite possible that Tyler fathered even more children with his slaves. Though he left office before the start of the Civil War, Tyler remained involved with the Confederate cause.

As of May 2021, one of the Tyler’s direct grandchildren is still alive and well: Harrison Ruffin Tyler.

Like John Tyler, Woodrow Wilson’s first wife, Ellen Axson Wilson, died during his first term as president. The widower quickly remarried, tying the knot with Edith Bolling in 1915. Bolling was herself a widow but entered the marriage with no children of her own; she’d given birth to a son previously who died in infancy and the complicated pregnancy left her unable to have any more children. Instead, she became the stepmother Wilson’s three daughters from his previous marriage: Margaret, Jessie, and Eleanor.

Famously, Edith took over many presidential responsibilities from her husband for following his severe stroke in 1919.

On Valentine’s Day in 1884, Teddy Roosevelt’s mother and first wife Alice suddenly passed away, of Typhoid Fever and kidney failure respectively. Not only that, but it was the Roosevelts’ fourth wedding anniversary — and Alice had given birth to their only child together, a daughter (also named Alice) just two days prior. The pregnancy is believed to have masked her kidney illness. Utterly distraught, Teddy wrote in his diary that night: “The light has gone out of my life. I do not think ever a man loved a woman more than I love her.”

But Teddy did remarry. He took up with his old teenage fling, Edith Kermit Carow, soon after and the two were married by 1886. Edith Roosevelt would go on to elevate and define the office of the First Lady by employing her own official staff, heading various ceremonial processions, and overseeing a vast renovation of the West Wing. She also, naturally, became stepmother to little Alice and had five children of her own with the historic president.

When he was still a B-list Hollywood actor, Ronald Reagan married his co-star, the Oscar-winning performer Jane Wyman. Wyman had been married twice before and her marriage to Reagan lasted just eight years. During that time though, the couple had three children: Maureen, Christine, and an adopted son Michael. They divorced in 1949, long before Reagan became a Republican nominee. In 1952, Reagan married the 31-year-old actress Nancy Davis. In addition to becoming a stepmother of three, Nancy had two kids of her own: Patti and Ron.

Ronald Reagan was the first-ever divorced president. And for decades he was the only one… until Donald Trump.

Melania Trump married former president Donald Trump in 2005. By that point, Trump had been married twice before and had four of his own children. Considering they were mostly grown by the time he wed Melania, she presumably did not aid in raising them. (Though Tiffany Trump was technically only 12 at the time, she was raised by her mother, Marla Maples, in California.) Melania had one son with her husband, Barron Trump, who is now 15 years old.

During her tenure as First Lady, Melania shared many state responsibilities with her stepchild, first daughter Ivanka Trump. (Ivanka was technically a “senior advisor” to the president.) As a result, many outlets have reported that the women, who are just 12 years apart in age, maintain a competitive and icy relationship.

Current FLOTUS Jill Biden is the stepmother of Joe Biden’s son Hunter Biden. She was also stepmother to Beau Biden, who passed away from brain cancer in 2015. After the boys’ mother, Neilia Hunter, and baby sister died in a tragic car crash in 1972, Jill met Joe on a blind date and stepped in to help raise the boys. The couple also has two children of their own, daughters Naomi and Ashley.

Though she’s not technically a First Lady, Vice President Kamala Harris’ blended family has been making headlines since the 2020 election. Though she’s had no biological children of her own, Harris became “Momala” to her husband Doug Emhoff’s two children, Ella and Cole, after they wed in 2014. Harris’ stepdaughter Ella, in particular, has become something of a media darling over the past year; she signed with IMG models and is involved in the New York fashion scene.

WATCH: What the Hell Is Going on in This Photo of the Bidens and the Carters? 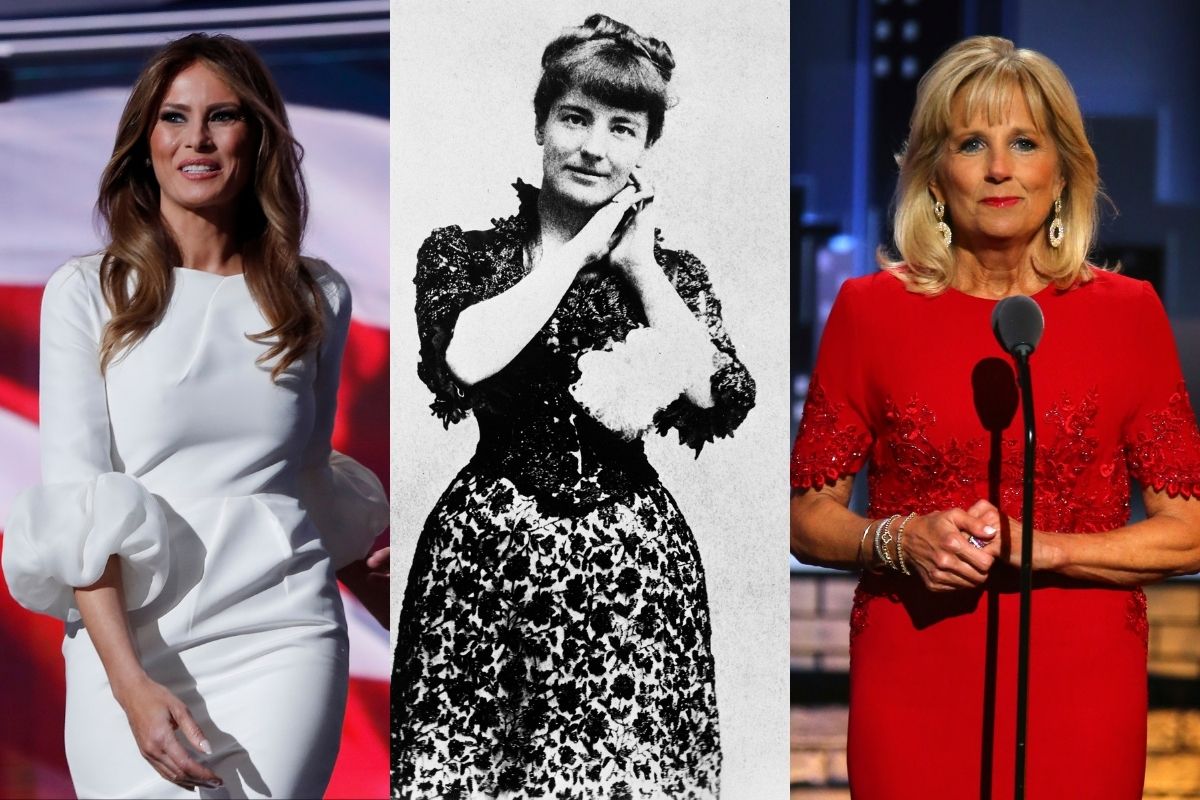