Tina Fey was right: the beauty of staying silent in age of outrage 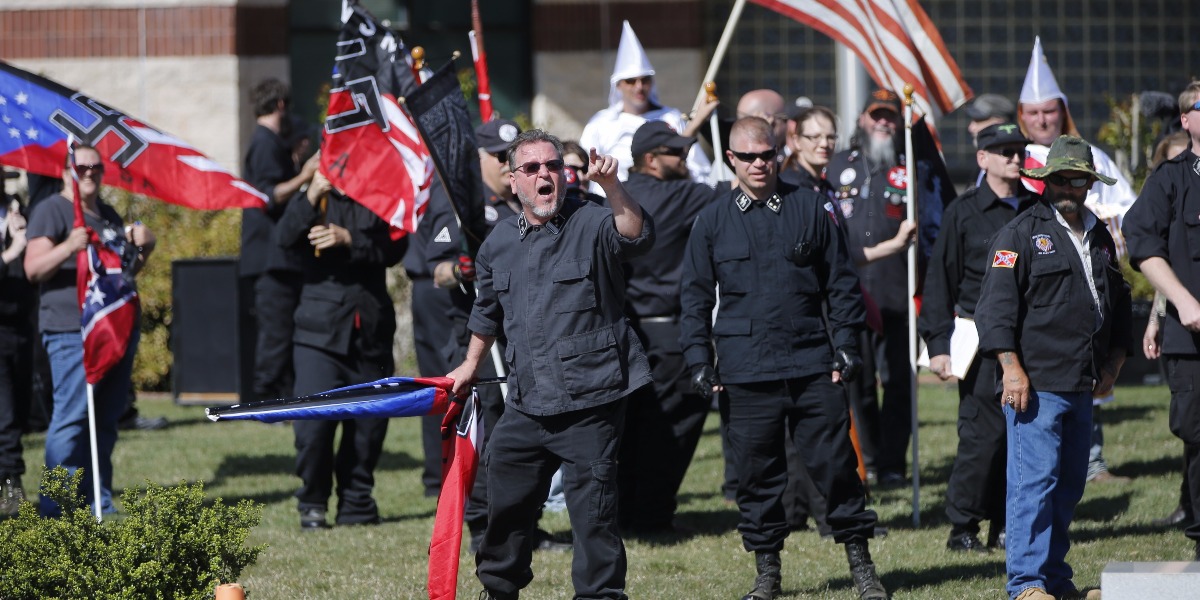 AP Photo/John Bazemore
In this Saturday, April 23, 2016 photo, members of the Ku Klux Klan participate in a "white pride" rally in Rome, Ga. Klan leaders say they feel that U.S. politics are going their way, as a nationalist, us-against-them mentality deepens across the nation. (AP Photo/John Bazemore)

Tina Fey is in hot water. The comedian is being called out after delivering a satirical monologue on Saturday Night Live’s “Weekend Update” urging Americans to ignore the alt-right protests in Charlottesville and other cities and instead eat cake.

Of course, it was a joke. But, as with everything in this age of outrage, some aren’t laughing. Fey was lambasted on Twitter by the far left for supposedly turning an eye to racial injustice.

Fey was clearly making a joke. But, the beauty of silence is no laughing matter.

RELATED: How do some people become attracted to white nationalism?

While Antifa and other counterprotestors on the left have denounced President Trump for drawing a supposed moral equivalency in his immediate comments after Charlottesville, the fact of the matter is that positioning oneself as a vocal opposing force is bound to draw comparisons.

From an anti-racist standpoint, perhaps the best option is to stay silent.

Nazism is a horrendously racist, anti-American philosophy. The alt-right is an intellectually bankrupt movement. These two statements are almost universally agreed upon, yet Antifa and the far left feel the need to position themselves as a foil to neo-Nazis in cities across America.

This yin-yang relationship oddly enough makes the two groups co-dependent on each other. After all, there would be no anti-fascists without fascists! Each blow one group delivers to the other only emboldens them, creating a narrative of victimhood to take back to the base and rally more troops in the future.

Freedom of expression is often praised for creating a “marketplace of ideas.” The thought is that truth will emerge when ideas compete against each other openly. Competition, of course, requires each side tolerate the co-existence of its competitor.

This works rather well in physical marketplaces where goods and services are being sold.

Coca-Cola may prefer a world where Pepsi doesn’t exist. However, the company does not go to the government demanding Pepsi’s business license be revoked. Not does it stage a boycott of Pepsi products. Instead, the two companies begrudgingly accept their co-existence, understanding that a little competition is healthy for everyone — especially consumers.

Yet, for some reason, the tolerance of other perspectives seems to go out the window in the marketplace of ideas.

Of course, intellectual challenges are the whole point of the marketplace of ideas. That’s what debates, peer reviewed papers, critical reviews and the like are for. The answer to bad speech is more speech, so the saying goes, so why stay silent? Antifa and other counterprotestors in Charlottesville were exercising their right to free speech in objecting to the content of alt-right’s free speech.

But, what’s the point of intellectually challenging a philosophy that has no merit to stand on?

Imagine if instead of marching against the alt-right in Charlottesville earlier this month, the entire town made the radical move to stay home — to completely ignore the hateful speech of Richard Spencer and his ilk. Surely, the alt-right rally would get some coverage on local TV, but likely not much beyond that.

Life would have moved on and, a few weeks later, the statue of Robert E. Lee would have quietly been torn down without relatively much of a fuss.

Instead, by acting as a conflicting force to motley crew of racist goons, Antifa and other counterprotestors have only emboldened their enemies. Spencer has vowed to return to Charlottesville and now the white nationalist movement is enjoying millions of dollars worth of free press, with write-ups in the New York Times.

The alt-right laid out the bait, and the media took it.

Instead of continuing this endless cycle of outrage, the anti-racist opposition should learn to choose its battles. Protests are best targeted towards bad policy proposals or actions, not the useless grumblings of “angry white boys” as Kevin Williamson described them in National Review:

The angry white boys do not have a serious political agenda. They don’t have any straightforward demands like the Teamsters or PETA do, and they do not have a well-developed ideological position like the Communists do, though it would be inaccurate to say that they lack an ideology entirely. Their agenda is their anger, an anger that is difficult to understand.

RELATED: Pathetic white nationalists go from winning to weeping as America shuns them

That’s not to say that concerned anti-racist Americans should sit idly and eat cake, as Fey humorously recommended. There are plenty of real policy battles that have taken a turn for the worse in harming minorities under the Trump administration.

For example, deportation orders are up 31 percent, attorney General Jeff Sessions is looking to target medical marijuana distributors and the travel ban is awaiting a final decision by the Supreme Court.

These are policy battles that could have real-life consequences on millions, not the squabbling of some angry white boys.

Those that are inclined to stand up against racism in the streets should get their priorities straight. Brawling with neo-Nazi losers in the streets is as useless as eating cake… and less delicious, too.

When confronted with a failed movement in the marketplace of ideas, like a bad product in an actual market, the right response is to move along. There’s no use engaging with intellectual SPAM. Nobody eats in anyway.