It was a scene right out of Aaron Sorkin, if Aaron Sorkin could write right-wing characters who aren’t just moronic strawmen.

Several hundred Trump supporters turned out on Saturday for the M.O.A.R. (Mother of All Rallies) near the Washington Monument to voice their support for the president. The gathering’s name was something of a misnomer, as the pro-Trump marchers found themselves outnumbered by the over 1,000 Juggalos who gathered near the Lincoln Memorial, but the event still drew enough publicity to trigger counter-protests from Black Lives Matter.

It’s a formula we’ve seen repeated many times, and the result always falls on a spectrum between mutual hatred and physical violence. Well, I hate to be that guy, but What Happened Next Will Shock You.

In a Facebook video posted by the left-leaning NowThis, we hear an African-American organizer of M.O.A.R. say, “Let ’em come on up … I’m gonna let Black Lives Matter come up here while I show them what patriotism is about, alright?”

RARE POV: There’s no reason to worry about the supposed “libertarian to alt-right pipeline”

Four or five BLM protesters then walked through the parted crowd and mounted the stage, listening while Tommy Gunn — another M.O.A.R. organizer whose parents were apparently huge fans of “Rocky V,” if that’s not a stage name — explained his proposal. “[This rally is] about freedom of speech … so what we are going to do is something you’re not used to, and we’re gonna give you two minutes of our platform to put your message out,” Gunn said before handing over the microphone.

Obviously the rhetoric of showing them “what patriotism is all about” and celebrating free speech in a way that they’re “not used to” was a somewhat passive-aggressive attempt to portray BLM as an anti-American organization bent on suppressing free speech. But to his credit, BLM New York President Hawk Newsome ignored the taunt and accepted the mic.

First, though, the rally organizers had to move a life-size cutout of President Trump out of Newsome’s way. For the duration of the Newsome’s speech, Cardboard Trump stood off to the side, indicating his approval with two perpetually half-assed thumbs-up.

It was a bold move for Gunn to offer Newsome the platform and an equally bold move for Newsome to agree to speak on Gunn’s turf and on his terms. Both will probably face condemnation for their decisions, but it was this very willingness to break rank and preach to someone other than the choir that made this moment so exceptional in Trump-era political discourse.

While Gunn and his fellow organizers stood around in their MAGA hats like Tom Hanks in a “Black Jeopardy!” “SNL” skit, Newsome launched into his message.

“I am an American!” he began, eliciting cheers from the audience before continuing. “And the beauty of America is that when you see something broke in your country, you can mobilize to fix it.” More cheers.

Having gotten off to a good start, Newsome defended the existence of BLM, citing the Eric Garner case as an example of a societal problem that “we need to address.”

“Shut up! That was a criminal,” one woman in the crowd, who is apparently under the impression that in this country we summarily execute people in the streets for illegally selling cigarettes, yelled, while many others booed.

Newsome also insisted his organization was not “anti-cop,” which at first drew more boos and shouts of “Yes you are!” But then, in a masterful rhetorical flourish, he said BLM believed that “if a cop is bad, he needs to get fired … like a bad f***ing politician.” In less than 10 seconds, he had identified and touched a shared anti-establishment nerve that turned those boos into cheers.

After Newsome finished speaking, he was asked to take a picture with the young son of a leader of Bikers for Trump. He even shook hands with the camo-clad leader of “a 4,000-member militia” who, Newsome said, told him, “I always knew I identified with you, but today solidified it.”

It would be easy to attribute purely cynical motives to both sides. Perhaps the M.O.A.R. organizers wanted an excuse to throw shade at anti-free-speech leftists, while BLM saw an opportunity to remove some of its stigma as an extremist group.

It would be easy, but it wouldn’t be accurate (at least not entirely), and I’m not going to do it. This is a Kumbaya moment for the ages, a reminder that we can “come together” without compromising. This is America. 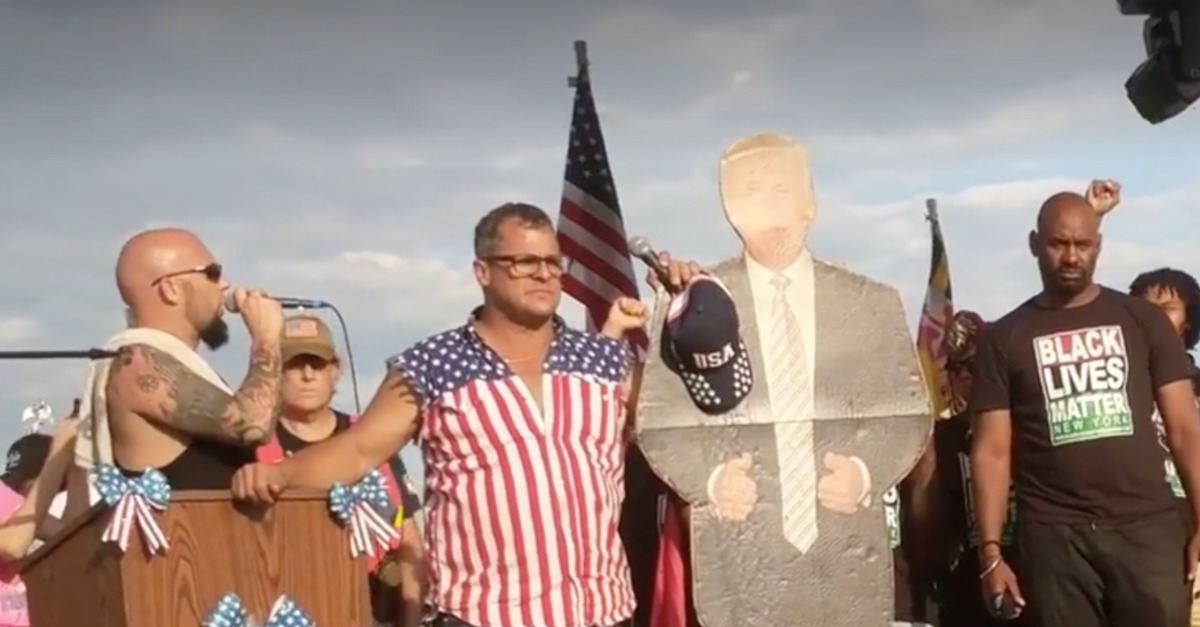