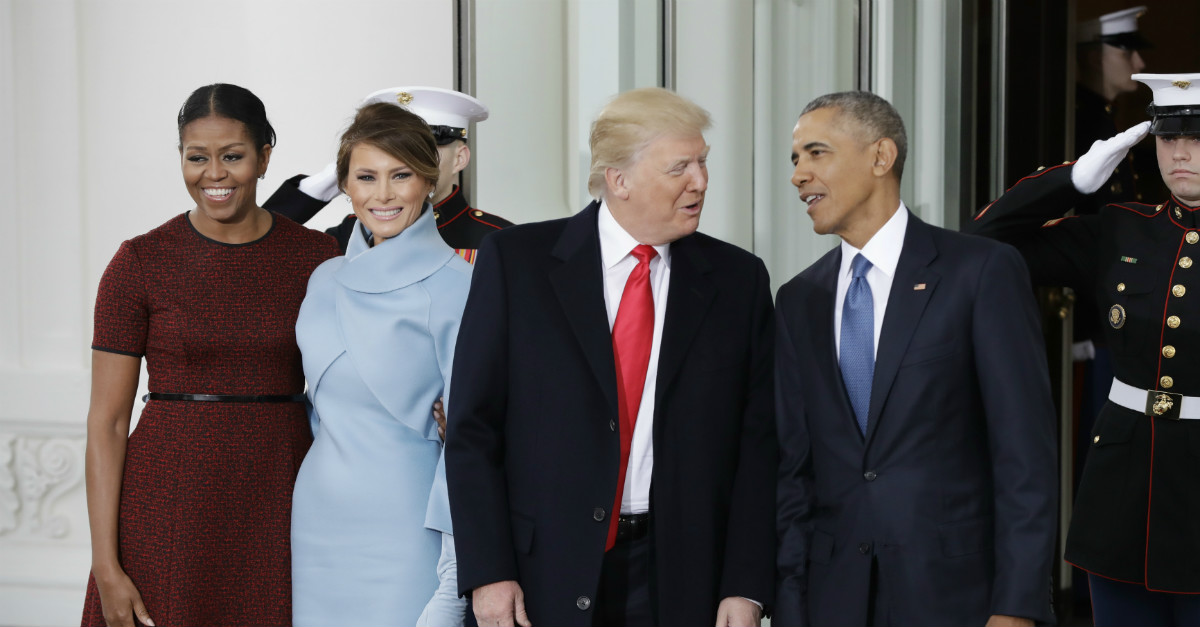 The presidential election of 2016 sent a tremor through just about every channel of American government. Donald Trump was to assume the most powerful office in the world, a man utterly removed from Washington’s political class, who had made harrowing if not downright threatening remarks toward the military, the intelligence services, both political parties, you name it. Trump was erratic, impossible to predict, the sort of guy?it’s become cliché to point this out?who you can’t trust with the nuclear codes.

Yet today, we’ll swear him into higher office anyway. We’ll do so peacefully, with the predecessor he scorned standing next to him on the dais and the campaign opponent he mocked sitting only yards away.

We don’t think about it often because we’ve become so inured to our humdrum politics, but these sorts of peaceful transitions are rare in human history. The vast majority of the earth’s people have been ruled by whomever happens to be militarily mightiest at a particular time, with their government constantly under threat of being overthrown by an eclipsing contender. Devastating conflicts have been waged over who has the right to the crown. In many nations, a deeply divisive and factional election like the one we just had would betoken a civil war; instead, not only does our machinery of civic society whir seamlessly onwards, great pains are taken to put on a show of unity, even if it’s nothing more than a masquerade.

The bullshit of this can be annoying. Switch on “Morning Joe” this a.m. and you saw pundits twisting into Cirque du Soleil-worthy contortions to portray this as just another inauguration?after all, Ronald Reagan and George H.W. Bush didn’t really like each other either, right, right? And JFK-to-LBJ was a jarring shock, too. Trying to slather an inauguration with varnish can seem excessive when the man about to be sworn in is Donald Trump. Isn’t it complacent to celebrate the mere transfer of power when the recipient of that transfer is someone so potentially dangerous?

Yet consider what else history offers. When the Russians overthrew Czar Nicholas II in 1917, they created a new government, which was then pushed aside by another government, which was then toppled by the Bolsheviks, sparking a five-year civil war between the red and white armies after which Russia was cast under communist rule for the next seven decades. Since 1999, power in the new and putatively democratic Russia has been swapped solely between Vladimir Putin and his sock puppet Dmitry Medvedev. The Spanish elections of 1936 were followed by a military coup, a three-year civil war, and 39 years of authoritarian rule under Franco. Just two years ago, Ukraine’s democratically elected president was ousted by violent protests in Kiev. China, the most populous country in the world, is still under tyrannical communist rule.

Here in America, it seems unlikely that Hillary Clinton is about to annex the Acela Corridor and field an army to march on Washington (only to be immediately defeated by Deplorable militias after hackers access her emails containing sensitive troops movements). Yet that’s been the historical norm. America is a fortunate exception. Even our Election of 1876, which almost ignited a civil war between the two candidates’ supporters, was peacefully resolved by the Compromise of 1877. A peaceful transition doesn’t seem like much in our modern age, but we would be unwise to take it for granted.

Facts about the presidential inauguration