Here’s what federal prosecutors are saying Michael Flynn lied about 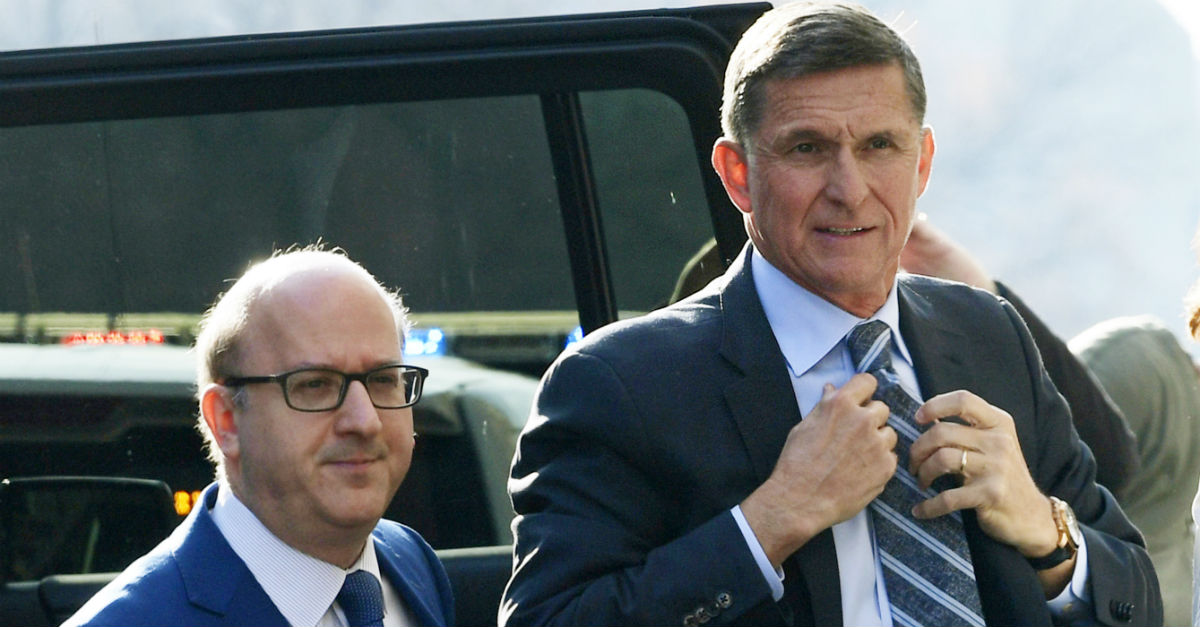 (AP Photo/Susan Walsh)
Former Trump national security adviser Michael Flynn, center, arrives at federal court in Washington, Friday, Dec. 1, 2017. Court documents show Flynn, an early and vocal supporter on the campaign trail of President Donald Trump whose business dealings and foreign interactions made him a central focus of Mueller's investigation, will admit to lying about his conversations with Russia's ambassador to the United States during the transition period before Trump's inauguration. (AP Photo/Susan Walsh)

On Friday morning, a charge was announced against President Donald Trump’s former National Security Adviser, Michael Flynn, which could mean that special counsel Robert Mueller’s probe is closing in on the president’s inner circle.

Flynn pleaded guilty to one charge of lying to the FBI in questioning about his contacts with Russian officials, and his attorneys say that he is cooperating with Mueller’s investigation.

In the Washington, D.C., courtroom, Prosecutor Brandon L. Van Grack said “a very senior member of the transition team directed” Flynn to make contact with Russian Ambassador Sergey Kislyak. Grack also said that, after Flynn talked with the Kremlin emissary, he “called a senior official of the Trump team at Mar-a-Lago” to discuss the conversation, per The Washington Post.

In a statement, the retired 3-star General defended himself against the charges but also accepted guilt, saying:

It has been extraordinarily painful to endure these many months of false accusations of “treason” and other outrageous acts. Such false accusations are contrary to everything I have ever done and stood for. But, I recognize that the actions I acknowledged in court today were wrong, and, through my faith in God, I am working to set things right. My guilty plea and agreement to cooperate with the Special Counsel?s Office reflect a decision I made in the best interests of my family and of our country. I accept full responsibility for my actions.

The plea originates to a conversation on Jan. 24 that Flynn had with the FBI. In court filings, federal investigators allege that the Trump adviser asked Kislyak not to “escalate the situation” after then-President Barack Obama hit Russia with sanctions. Prosecutors say that the ambassador contacted Flynn on the same day that Obama signed the order enacting the sanctions.

.@BrianRoss: Mike Flynn is "prepared to testify" against Trump, his family, & the campaign, including Trump ordering him to talk to Russians pic.twitter.com/WMhKpGADzp

Mueller’s team laid out a detailed timeline, beginning with Flynn’s December conversations with the Russians and tying in Vladimir Putin’s response to the sanctions (Putin said Russia would not retaliate).

Prosecutors also say that Flynn had conversations with Russia about the United Nations resolution hitting Israel for settling regions of Palestine. Obama’s administration refrained from voting on that measure, but Trump was outspoken against it. The feds say that Flynn urged Russia to push a vote on the resolution back, seemingly until Trump took office.

Mueller’s probe into communication between Trump officials and Russians has been surprisingly quiet. We’ve gotten morsels of information about who investigators are interviewing and a lot of pundits speculating about what charges might arise, but Flynn’s plea marks the first time that the special counsel has drawn blood on people inside of Trump’s campaign team. In October, Paul Manafort, who briefly served as campaign manager, was indicted on twelve charges, but, as Trump pointed out in a tweet, those charges seem to date back to before he got on board with the campaign.

Sorry, but this is years ago, before Paul Manafort was part of the Trump campaign. But why aren't Crooked Hillary & the Dems the focus?????

While the charge against Flynn seems like a huge blow to the president, they bring more questions than answers. Lying to federal investigators is a serious accusation, but most political analysts agree that it was a plea deal. The question now arises: what did the feds offer him?

One bombshell came from Brian Ross of ABC, who said that sources familiar with the matter tell him that Flynn is preparing to testify against President Trump and that the former national security adviser only made the decision to turn on the White House in the last 24 hours.