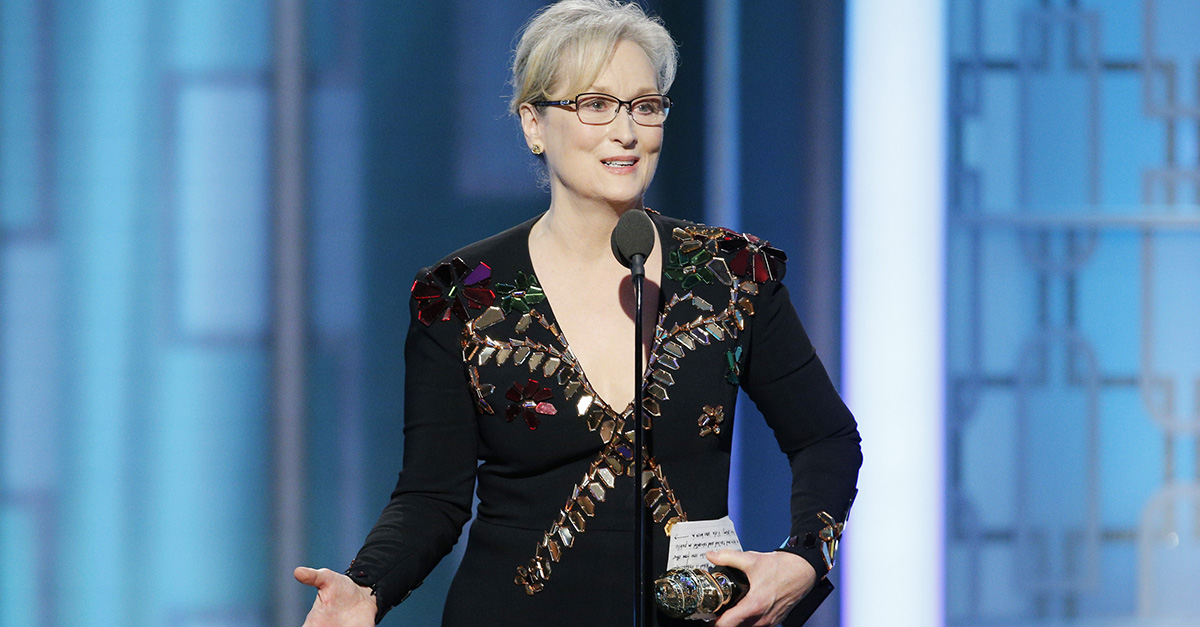 Hollywood is awfully proud of itself. This has always been apparent, but it was brightly highlighted Sunday night at the Golden Globes.

Meryl Streep was honored with the Cecil B. DeMille Award for her contributions to the world of entertainment. To be sure, she is a talented actress and has done much in her career. However, her speech, in which she lambasted Donald Trump, was mostly a snarky, pretentious snippet of the Hollywood worldview.

And that’s a small world.

Too often, those on the coasts stare at those of us in the middle of the country and ridicule our seemingly simple lives. We are thought of as not being cultured or diverse enough. These things are untrue. We may not live in towns and states that coastal elites find worthy, but our lives have just as much value. In fact, without middle Americans – farmers, laborers, factory workers, doctors, teachers, first responders, military personnel – this country would not run. It is certainly not Hollywood that keeps the gears moving. There is nothing wrong with the movie industry, but it is not essential to American life.

RELATED: Why is Lawrence O’Donnell allowed to have political opinions but Meryl Streep isn’t?

However, Streep’s speech went in another direction. Instead of outright shaming the “regular” people (many of whom voted for Trump), she propped up Hollywood and essentially labeled it a necessity, especially in the era of our current president-elect. I am no Trump supporter, but this was absurd:

…Hollywood is crawling with outsiders and foreigners and if we kick ‘em all out, you’ll have nothing to watch but football and mixed martial arts, which are not the arts.

…an actor’s only job is to enter the lives of people who are different from us and let you feel what that feels like and there were many, many, many powerful performances this year that did exactly that – breathtaking compassionate work…

One more thing: Once when I was standing around on the set one day whining about something, you know, we were going to work through supper or the long hours or whatever Tommy Lee Jones said to me, “Isn’t it such a privilege, Meryl, just to be an actor?” Yeah it is and we have to remind each other of the privilege and the responsibility of the act of empathy. We should all be very proud of the work Hollywood honors here tonight. As my friend the dear departed Princess Leia said to me once, “Take your broken heart, make it into art.”

Apparently, “empathy” is the goal of those in Hollywood. I’ve somehow missed that this entire time.

The entertainment industry has been so vocal, not only against Trump but also those who voted for him, that they’re almost single-handedly setting him up for another term before his first one has even begun. No one likes condescension, but it is especially not appreciated from a group of people so pompous that they view themselves and their little world as indispensable to American life.

Hollywood exists in a bubble even more ideologically exclusive than the one us regular people inhabit. Meryl’s speech allowed us to peek into the inner thoughts of the entertainment industry yet again. The election has not only caused them to be more vocal than ever, but has ratcheted up their already high opinions of themselves. If they actually had the empathy Meryl says they possess, they would learn to accept the result—along with those flyover voters who brought about the change.