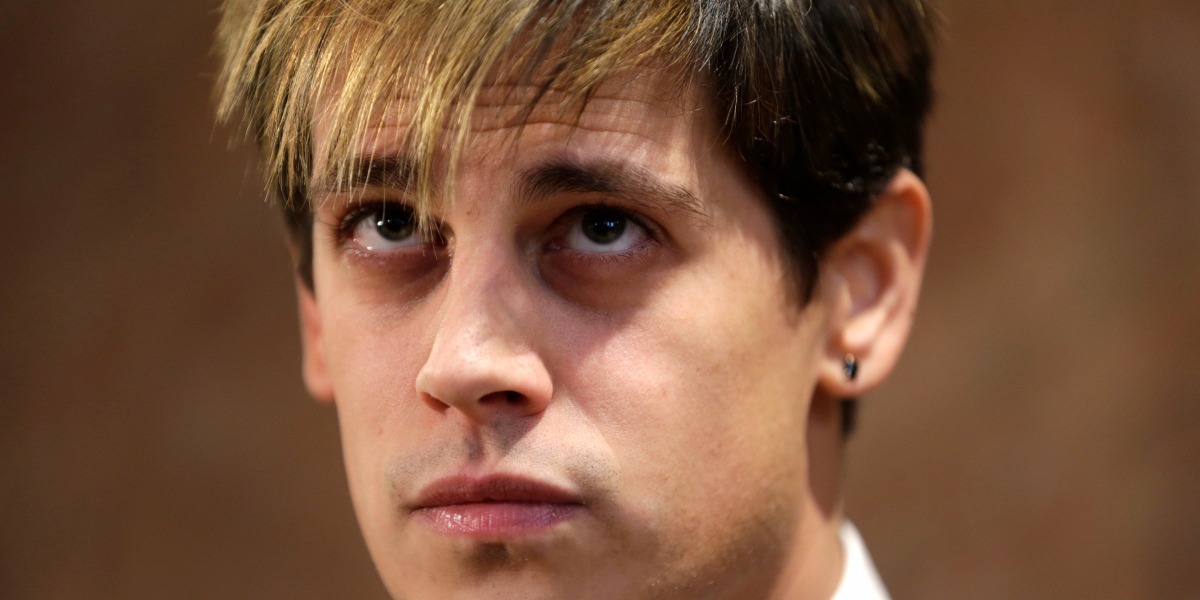 In the spring of 2016, I worried at The Daily Beast that Breitbart provocateur Milo Yiannopoulos’s praise for white nationalists who help form the “alt-right” could lead some young minds toward that putrid ideology. Both Yiannopoulos and many of his fans accused me of attempting character assassination.

“You sound like the left, Jack,” was a common refrain. “You’re bashing conservatives using leftist tactics,” was a similar, oft-heard pushback.

To many on the right, there’s nothing worse than being on the left. Even explicit racism, apparently.

Despite calling white nationalists like Richard Spencer and Jared Taylor “intellectuals” and “renegades” (my primary objection to Milo) in his alt-right “guide” in March 2016, in addition to playing footsie with racists in other ways, Yiannopoulos had always vehemently denied that he was in any way helping promote white nationalism.

?I don?t have unsavory opinions about skin color,? Yiannopoulos barked at CNN in February. ?What you are seeking to do, by associating me with people who have odious and disgusting opinions, is suggest that I somehow in some way tacitly enable these people.?

Last week, we learned that Yiannopoulos had directly enabled and collaborated with white nationalists.

“Here’s How Breitbart And Milo Smuggled Nazi and White Nationalist Ideas Into The Mainstream,” read the headline at Buzzfeed News late Thursday, as reporter Joseph Bernstein used private emails he obtained to connect alt-right dots between former Trump adviser and and Breitbart editor Stephen Bannon, Yiannopoulos and others, that led to at least one firing.

We also learn that in preparing for his alt-right guide, Yiannopoulos emailed white nationalists for input, and not in the same way a regular journalist might contact David Duke for mere comment.

?I think you?ll like what I?m cooking up,” Yiannopoulos wrote to Devin Saucier in March 2017. In addition to helping edit online white nationalist site American Renaissance, Saucier “is associated with the Wolves of Vinland, a Virginia neo-pagan group that one reporter described as a ‘white power wolf cult,’ one member of which pleaded guilty to setting fire to a historic black church.” Bernstein notes that, “By spring 2016, Yiannopoulos had begun to use (Saucier) as a sounding board, intellectual guide, and editor.”

In one email exchange between Yiannopoulos and Saucier about immigration and other racially charged issues, Milo appears to signal that he is “easing everyone in gently” on the issue of IQ differences among different groups, a white nationalist obsession.

Arguably worse than his coziness with Saucier was Yiannopoulos reaching out to Andrew “Weev” Auernheimer, who helps run the neo-Nazi site The Daily Stormer. Later, in August of this year, Auernheimer would urge his followers to disrupt the funeral of Heather Heyer, the woman killed by a white nationalist in Charlottesville, Virginia.

In addition to seeking input from Auernheimer for his alt-right guide. Yiannopoulos once tried to book the neo-Nazi on his podcast before Breitbart’s upper management shot it down. “Great provocative guest,? Yiannopoulos wrote of Auernheimer, ?He?s one of the funniest, smartest and most interesting people I know. … Very on brand for me.?

I shared this Buzzfeed story on social media after it broke last week. Those who already did not like Yiannopoulos didn’t seem surprised by the revelations. Some who had once been Milo fans were bothered by it.

But a sizable, more worrisome reaction came from those who insisted the Buzzfeed story was merely a leftist smear job. These commenters did not care if Yiannopoulos was collaborating with or even actively promoting white nationalists, and to the degree that you could convince them the Buzzfeed story was valid, they did not want to hear it.

18 months ago, Yiannopoulos’s defenders were outraged that anyone would associate him with open racists. Now, after learning that Milo warmly associated himself with open racists, it doesn’t seem to bother some.

That more Americans might be less repulsed by neo-Nazis than they once were – or even those rubbing shoulders with neo-Nazis – is unsettling. Even if it’s just to spite the left, which is the defense some willing to dismiss the Buzzfeed story seemed to settle into.

I tend to believe the alt-right “movement” peaked in Charlottesville in August, when America saw these people away from their keyboards and out in the open, behaving as the vile racists they are. Yet, there’s no denying that the once fringe ideology of white nationalism is stronger today than it was a year ago.

It should also be undeniable, at this point, that Milo Yiannopoulos’s constant promotion of the alt-right had a lot do with it.