If Trump is a fascist dictator, he’s really bad at it 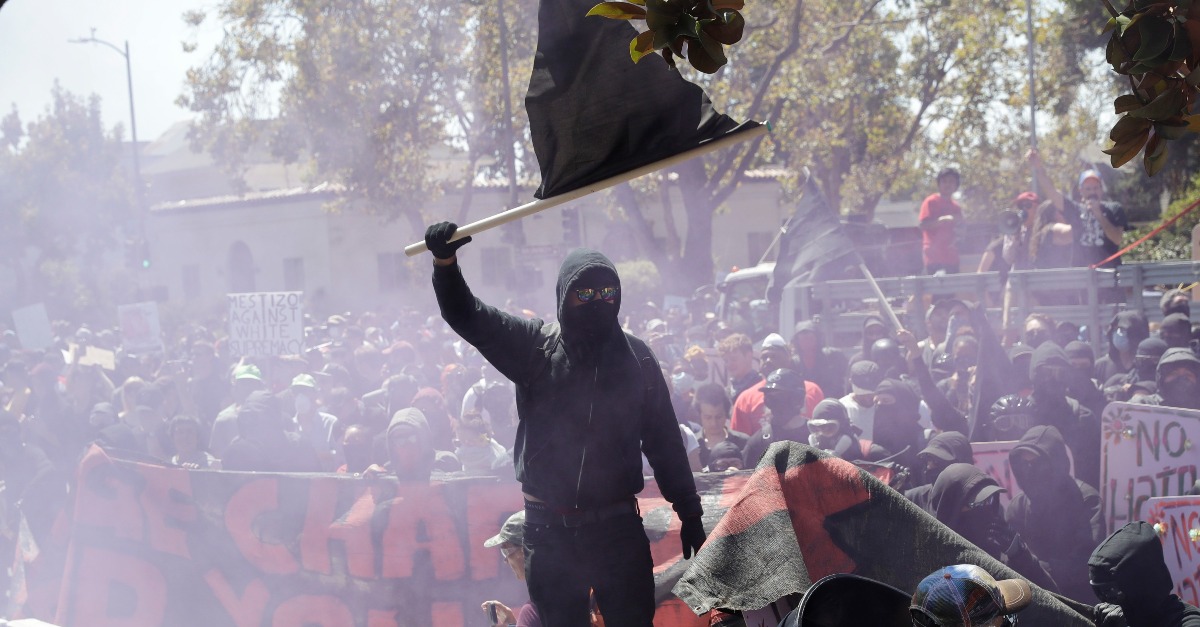 AP Photo/Marcio Jose Sanchez
An anti-fascist demonstrator jumps over a barricade during a free speech rally Sunday, Aug. 27, 2017, in Berkeley, Calif. Several thousand people converged in Berkeley Sunday for a "Rally Against Hate" in response to a planned right-wing protest that raised concerns of violence and triggered a massive police presence. Several people were arrested for violating rules against covering their faces or carrying items banned by authorities. (AP Photo/Marcio Jose Sanchez)

I was busy attending a wedding during Saturday’s scheduled “antifa apocalypse,” but once I left the reception, I found the world much as I’d left it.

Trump supporters and antifa protestors weren’t exchanging gunfire in the streets, white families weren’t being decapitated by “antifa supersoldiers,” and President Trump’s head hadn’t been impaled on a pike outside the Capitol.

Although some far-right media outlets had predicted a violent communist revolution, the series of antifa protests organized by the group Refuse Fascism and scheduled for Nov. 4 were entirely anticlimactic.

RELATED: A petition to recognize “Antifa” as a terror group goes to the White House

“[A] little more than 300 people showed up [to the New York protest], according to NYPD officers tasked with securing it. Many of the signs Refuse Fascism had prepared sat stacked against a metal railing,” Newsweek reported.

The “apocalypse” was certainly a far cry from a civil war, and the embellishments the far-right media attached to it were ridiculous, but that doesn’t mean that the rhetoric employed by the events’ organizers wasn’t concerning.

“Take To The Streets And Public Squares,” Refuse Fascism’s website urged. “[I]n cities and towns across the country continuing day after day and night after night — not stopping — until our DEMAND is met … The Trump/Pence Regime Must Go! In the Name of Humanity, We REFUSE to Accept a Fascist America!”

According to Newsweek, a few of the protestors who showed up in Times Square also handed out literature for the Revolutionary Communist Party, a group that is affiliated with Refuse Fascism and publishes books with covers that look like they were designed with early 2000s Word Art.

During the 2016 presidential campaign, I was as worried as the next person by Trump’s populist appeal and frequently violent rhetoric. The similarities to fascist dictators of the past were there for anyone to see, and I don’t think you need to be a tinfoil hat antifa nutjob to acknowledge that.

If Trump is a fascist dictator, though, he’s doing a terrible job so far.

Any fascist dictator worth his moustache would never allow a group like Refuse Fascism maintain a website, call for his resignation and hand out communist literature on street corners.When three German students distributed leaflets encouraging people to resist the Nazi regime, Hitler had them executed by guillotine. Trump hasn’t even arrested any of the leaders of antifa yet. If he wants to be a fascist dictator, he’ll need to step up his game.

When antifa loses their right to protest, I’ll start taking their protests against “fascism” seriously. Until then, they’re just LARPing, acting the part of brave resistors by taking to the streets of a fully functioning republic with a duly-elected leader who has done nothing to infringe upon their freedom of speech.

To call themselves anti-fascists in opposition to white supremacists like the ones that rallied in Charlottesville is appropriate, but when antifa members apply the term “fascist” to Trump and claim to be living in an oppressive society, they dishonor the brave individuals — like Hans Scholl and Dietrich Bonhoeffer — who died resisting actual fascists.