If we want a smaller government, we need to learn to take care of our communities 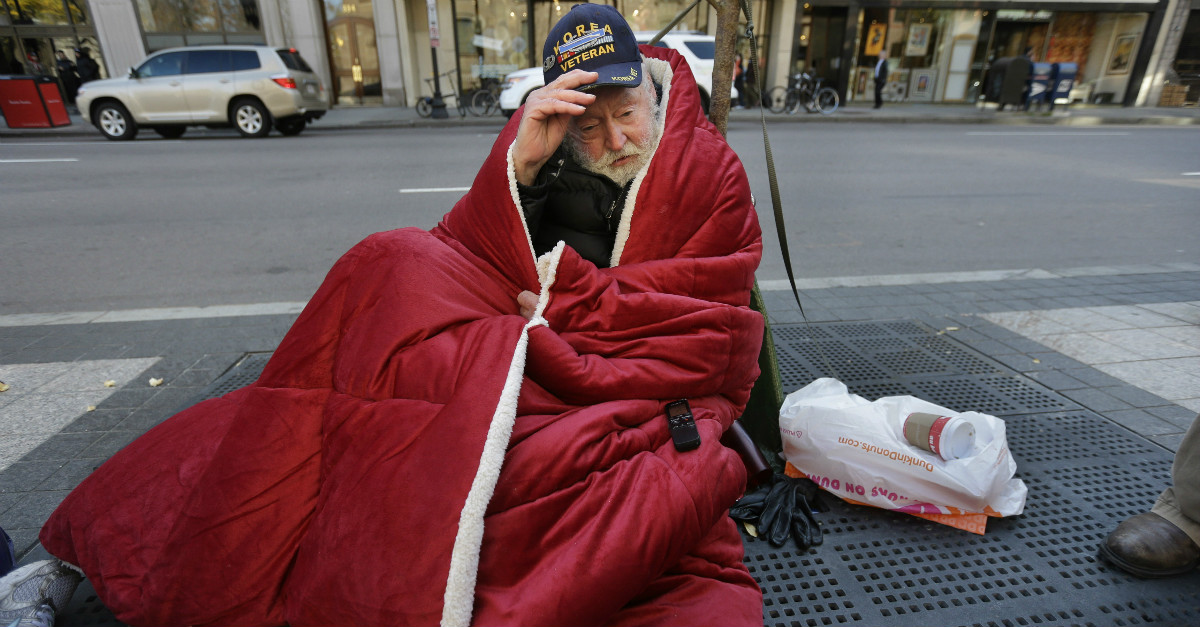 (AP Photo/Steven Senne
In this Wednesday, Nov. 20, 2013 photo homeless Korean War veteran Thomas Moore, 79, adjusts his hat while wrapped in a blanket on a sidewalk in Boston. Moore, who said he accidentally killed his best friend with a phosphorous grenade during one firefight and spent months afterward at Walter Reed Army Medical Center in Washington, also said he has no interest in getting a government-subsidized apartment. (AP Photo/Steven Senne)

On Wednesday, former Vice President Joe Biden announced his new nonprofit organization, the Biden Foundation, through which Biden will continue working with the causes he feels passionate about.

Perhaps it wasn’t intentional, but I’ve noticed a curious thing about the way this project has been described in media reports. Talking Points Memo explained that the foundation will be a “platform for Biden to advance priorities he worked on in the Senate and the White House,” while The Week said the organization will “continue the work Biden did in his decades in government.”

Don’t get me wrong, it’s great that Biden is launching this new charity. The start of any project to help people is something to be celebrated.

But the fact that he explicitly plans to continue in the private sector the same work he was already doing in the public sector begs an obvious question: Why did the government need to be involved in the first place?

Biden’s focus on issues such as curing cancer and making education affordable is admirable. Yet if we can do these good things on a voluntary basis — as Biden’s move here seems to tacitly admit — why would we shift such important responsibility over to Washington?

The perhaps equally obvious answer is the uncertainty that comes with private projects. Just because we could handle these sorts of things privately doesn’t mean we would. With government at the helm of humanitarian endeavors, there is some certainty of results. Who’s to say the Biden Foundation will ever get close to as much money to pursue its aims as a government agency would?

It was while pondering this question that I ran across this article — “What If the Welfare State Is the Result of the Church?” — from Jimmy Lewis at the Institute for Faith, Work, and Economics, which looks at economic and labor issues from a Christian perspective.

Lewis ran the numbers on church income in the United States as compared to what our government currently spends on food stamps, housing, and homelessness. Here’s what he found:

Approximately $100 billion is donated to the American church annually, yet America is still plagued with homelessness, poverty, poor education systems, inadequate health care, and more. People often complain about the government’s misallocation of money (particularly regarding entitlements), but there seems to be a double standard in play here.

Nearly half of a church’s budget typically goes directly to staff for salary and benefits. Likewise, one of America’s largest Christian denominations reported spending $637 million in 2014 on foreign missions. This is a drop in the bucket compared to the church’s annual income (via donations/tithes), which could completely fund government food stamps and still have $30 billion left over.

Similarly, the church could single-handedly carry out housing and homelessness initiatives—which are currently provided by the government—and still be left with $49 billion. What could the American church do to help the country, if they truly dedicated themselves to these causes?

RELATED: You didn’t care when Obama did it

Lewis’ conclusion is straightforward and uncomfortable. If there is this much of a need for government welfare programs — and despite some high-profile cases of fraud, the need is real — it is significantly because the church is not stepping up to the plate. As Christians, we have at our disposal a vast network of people and money which a small outfit like the Biden Foundation could only dream of. We also have some pretty clear instructions from Jesus on caring for people in need.

I mention all this simply to say that Biden’s move reminded me there are a lot of good things presently handled (well, often “handled” is too kind a term) by Washington which are really our responsibility as individuals and communities. If, like me, you’re a Christian, that’s doubly true.

And as long as we remain inactive on these issues, the scope and size of government will continue to grow. Instead, let’s stop waiting for the government to fix our problems and fix them ourselves. If we want a smaller government, we need to learn to take care of our communities.