Most congressional Republicans prove they are hypocrites on debt and deficits 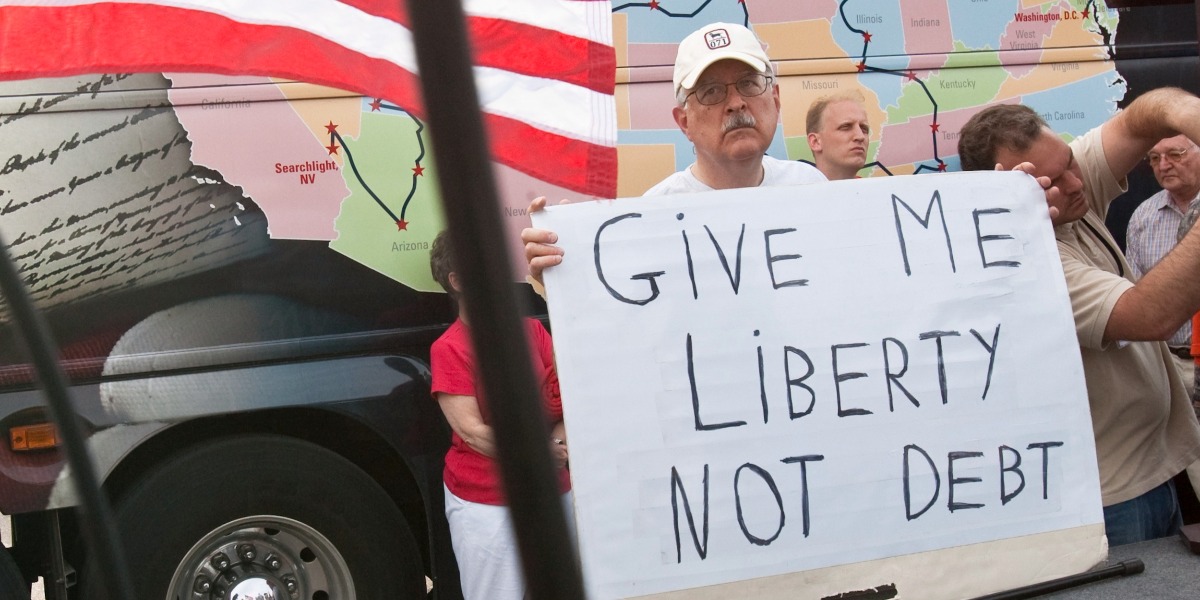 AP Photo/Nati Harnik, File
FILE - In this April 1, 2010 file photo, a participant in the Tea Party rally holds a sign in Omaha, Neb. The Associated Press reviewed tea party operations in almost every state, interviewing dozens of local organizers as well as Democratic and Republican strategists to produce a portrait of the movement to date _ and its prospects for tilting this November's elections. (AP Photo/Nati Harnik, File)

Conservative and Tea Party lawmakers in Congress seem to have lost their way — in their desperation for a “win” in 2017, they’re willing to sacrifice nearly everything to pass tax reform, including their previous commitment to lower deficit spending.

The GOP tax bill could allow the debt to rise $1.5 trillion, and end-of-year spending bills notoriously include all kinds of sweeteners for both parties that raise the debt without offsets. Government spending is set to expire on Dec. 8, thanks to a deal President Donald Trump made with Senate Minority Leader Chuck Schumer and Nancy Pelosi in September.

An end-of-year spending crisis has become a tradition for Congress, and 2017 is shaping up to be utterly typical. While Trump wants the deal to include funds for the border with Mexico, Democrats want to continue Obamacare subsidies and a deal for DREAMers. It’s likely a deal will be struck that does both, and it may include the tax cuts the GOP seeks.

Since tax cuts theoretically cost the government revenue, the cost of the cut is usually made up elsewhere — either by lowering spending or in various taxes or fees. Previous deficit hawks, including the House Freedom Caucus, are now arguing that these tax cuts will pay for themselves because they will stimulate the economy.

That is an argument directly from the second President Bush’s tax cut playbook — and as such, lawmakers should be wary. Back when the government actually had a surplus, Bush argued that his tax cuts would be paid for with increased revenue from a boosted economy. Federal Reserve Chair Alan Greenspan agreed, citing the government’s projected surpluses. But lawmakers don’t have crystal balls — and after the housing market bubble and the Wall Street crash, revenue projections fell radically. Ultimately, the Bush tax cuts were paid for on credit. In essence, we are still paying for them.

After over a decade of deficits, lawmakers cannot afford to ignore the country’s serious fiscal difficulties. Even though the boosted economy has resulted in increased tax revenue for the government, it does not pay for the nearly $130 billion in increased spending. We are already borrowing to keep Social Security afloat and spending nearly $7 million per minute, or $50,000 every second (that figure is calculated from the 2010 budget number of $3.6 trillion, while the 2017 budget’s number was projected at $4.1 trillion). The deficit is set to hit $1.5 trillion within a decade. The U.S. has $20 trillion of public debt, or nearly $161,000 per taxpayer. To approve an unpaid-for tax cut and massive amounts of new spending in this climate is the height of fiscal folly.

The debt and deficit matter, regardless of which party occupies the Oval Office. It is literally a matter of national security, and the economy is already struggling under the weight of the debt the U.S. currently owes.

RELATED: Rand Paul slams Republicans for voting against his amendment to cut $43 billion in spending

Sadly, even Tea Party lawmakers who voted against hurricane relief because they were opposed to adding to the deficit now seem to have lost their will. The House Freedom Caucus, who stood resolutely against spending under President Obama, have been utterly defanged, agreeing to support the budget resolution. In the Senate, Rand Paul was the only Republican to vote no.

The country’s fiscal crisis didn’t disappear when Obama left office. Republicans, and the House Freedom Caucus in particular, should stay true to their values and committed to reducing the debt and deficit. If this is a Faustian bargain to secure a political win, a tax cut that drives the country even further into debt is a deeply hypocritical price to pay.