Last night, the Republican-controlled U.S. Senate passed exactly the kind of massive spending bill they used to rail against–a gargantuan $1.3 trillion Omnibus that has more devilishly reckless details than anyone could possibly count.

Sen. Rand Paul got through 600 pages of this 2,232 page monstrosity, sharing many of the details, before learning enough to know he would vote against it.

Imagine that: a U.S. Senator had the radical idea he should actually know what he’s about to vote on.

Here’s what Sen. Paul found and shared via Twitter:

You can read the rest by continuing on Twitter, but Paul’s following tweets are included here.

Page 348 of terrible, rotten, no-good budget busting bill, a nugget that I wish we obeyed

sec. 8103: none of the funds may be used in contravention of the War Powers Act

hmm . . . that would mean we shouldn’t be spending $ in undeclared wars in Yemen, Libya, Niger, Somalia, Afghanistan

and I’m STILL reading. This bill is no @bradthor thriller.

All told, we’ve spent over a trillion dollars in this budget busting category.

I found it! I found it! Border security, what President Trump wanted!

no . . .wait a minute section says Defense can spend what funds it determines to enhance the border security of Jordan, Lebanon, Egypt, and Tunisia

eyes getting tired but really someone should read this beast.

Page 392 sec 9007: no $ shall be spent “for the permanent stationing of US forces in Afghanistan”

Wonder what they meant by permanent? Some might argue that after 16 years we approaching the definition of permanent.

Page 430 of “crumni-bus:” Good news. The government is going to “earn” $350 million by selling oil from Strategic Petroleum Reserve.

Bad news is the $ won’t go to reduce the $21 trillion debt. The $ will be instead be spent elsewhere by the Federal government.

Page 485: No $ used by the IRS to target citizens for exercising 1st amendment rights.

Do you think Lois Lerner knew about this part of the law before she targeted Tea Party groups? pic.twitter.com/t41kZ63oD8

Ordered some pizza to help me get through. Still going… pic.twitter.com/FKDO3DkRHe

Post Office gets $58 million but only if it promises not to close down small, underutilized, money-losing post offices.

No $ for the President to request FBI background report on any individual.

If we had amendments, this would be a good place to add no $ for partisan hacks in the Intel community to unmask any American without a judicial warrant.

Page 594 sec 626: No $ to require disclosure of content of an electronic communication.

Good amendment here. It would be to also protect forced disclosure of metadata, ie phone #’s and identities of the phone callers.

I shared 600 pages tonight. I’m done tweeting them for the evening. If they insist on voting, I will vote no because it spends to much and there’s just too little time to read the bill and let everyone know what’s actually in it.

Thanks for sticking with me.

“I voted against this deficit-spending bill because I believe our promises to change Washington matter.” Paul said in a press release released early Friday morning. “I will keep fighting to hold our party to the conservative principles we had no problem proclaiming during the Obama years.”

Victory for conservatives today is that all of America now knows what a budget busting bomb this bill is. Hopefully, today’s battle will embolden conservatives to descend on Congress and demand Constitutional government. 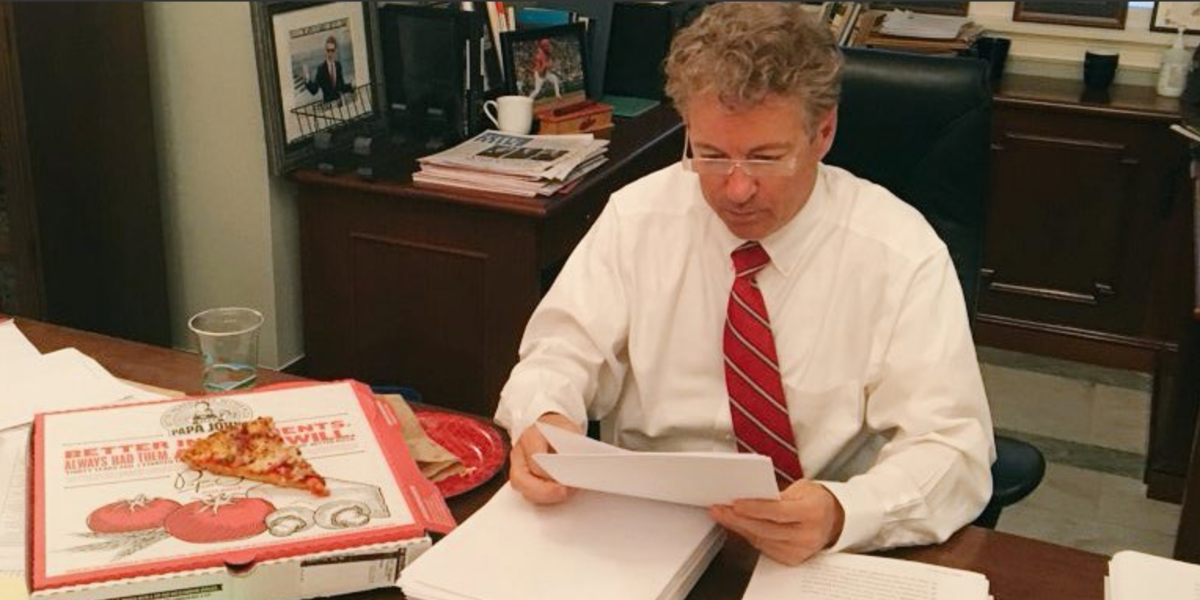