Washington, D.C., has four layers of bureaucracy to protect against rogue shoe-shiners 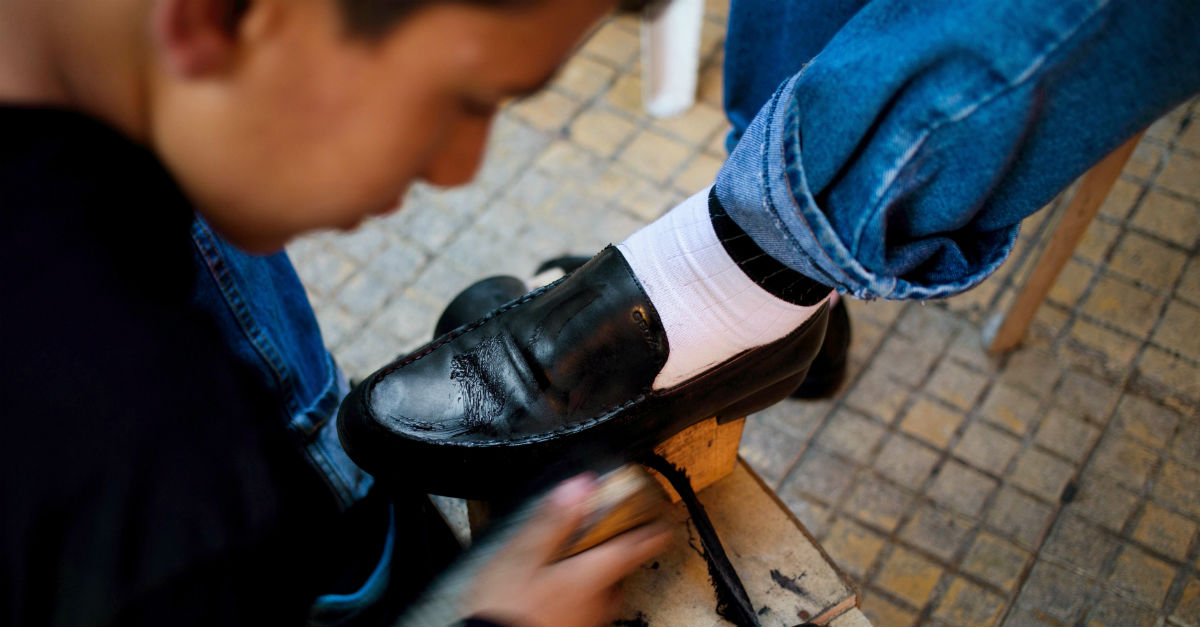 AP Photo/Bilal Hussein
In this Tuesday, March 15, 2016 photo, a Syrian refugee boy shines a customers shoe on Hamra street in Beirut, Lebanon. The U.N.'s children agency, UNICEF, says there are 2.8 million children out of school in the region, and child refugees are particularly at risk of exploitation and abuse, with large numbers being left with no choice but to go out to work, rather than attend school. They sell flowers and other trinkets on the street, they work as shoe shiners and in construction and other jobs. (AP Photo/Bilal Hussein)

Shining shoes seems like a relatively low-risk occupation. (Heck, even Andy Dwyer can do it.)

Not so, says the city government of Washington, D.C., where would-be shoe shiners have to acquire no fewer than four licenses, with fees totaling at least $337 to get into business. Oh, and if you want to shine shoes on the sidewalk, cough up another $1,200 for a two-year permit.

That there is not and would never be a problem with dangerous, rogue shoe-shiners in the absence of this regulatory burden apparently doesn’t matter. And it’s not difficult to imagine rules (and, more importantly, gouging fees) like this preventing would-be entrepreneurs from getting into the shoe-shine business altogether.

RELATED: Orlando reminds us how unfair the FDA’s anti-gay blood donation rules are

Unfortunately, this absurd licensing scheme is nothing unusual:

To understand just how out of control occupational licensing is, first consider the relatively reasonable example of emergency medical technicians. The Institute for Justice, a nonprofit public-interest law firm, estimated in 2012 that the average EMT license costs $85 and requires 33 days of education and training.

Now compare that to other professions where the stakes aren’t so high—barbers, for instance. Alabama is the only state that doesn’t license them. On average, a would-be hair trimmer must spend more than a year in training and fork over $130. This may not seem like much, but it may be a serious barrier for a low-income job seeker who cannot afford to quit one job to train for another profession, often at his or her own expense and without a paycheck. In Nevada, the education and training requirement for barbers is 890 days — about two-and-a-half years.

Cosmetologists must be licensed in all 50 states, and the average cost is $142, plus more than a year of education and training, and two exams. Commercial carpenters and cabinet makers, licensed in 29 states and the District of Columbia, fare even worse. They’re looking at about $300 and roughly 450 days in school.

All told, roughly one in four jobs in America today are subject to occupational licensing, much of it just as ridiculous as Washington’s rules for shoe shiners.

“The growth of government is often well-meaning, but really pernicious — and particularly pernicious when it has poor victims,” explains Senator Ben Sasse in the video from The Daily Signal below. “It surprises people to hear it that way, but if you think about what’s happening with occupational licensing, is bureaucratic regimes at all levels of government across the country are just layering more and more byzantine plaque on old levels of government.”

RELATED: If the government does something “for your safety,” always demand proof
That’s why Sasse and Senator Mike of Utah partnered to introduce the Alternatives to Licensing that Lower Obstacles to Work (ALLOW) Act this month, a bill which would provide for licensing reform in D.C. and on military bases, both of which are under federal jurisdiction. But for larger-scale change, the same thing needs to happen on state-by-state basis.

The good news is that this issue is finally getting the attention it deserves. The libertarian law firm Institute for Justice has been working against onerous licensing laws for a long time, and even the White House noticed last year that occupational licensing is a real problem.